Film is cheap, and I use of lot of the digital versions of it. My theory is is you take enough varying images of the same thing, one of them statistically will be usable. Not high art mind you, just in focus, and tells the story. I'm rarely without the camera, and I burn through about one a year graduating in technology each time. I also seem to see things many never notice, which at times can take a decidedly odd turn. Huh? Click. I was going through my pic files, and stumbled across these. A mix of the interesting, and others that are just the product of my imagination. 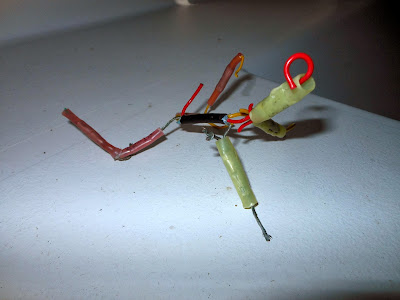 Email ThisBlogThis!Share to TwitterShare to FacebookShare to Pinterest
Labels: Humor

I thought it was an inspired idea. If I wanted to know why so many boats are so difficult to maintain, and so installation unfriendly, I should talk to some boat designers. Go to the horses mouth so to speak, and get the facts. I look online and find some firms whose sites aver they do production boat design, and pick some likely ones to communicate with. There aren't really very many of them. I pick one and send an email that goes somewhat like...

Dear Production Boat Design Professional, I'm a writer, and own a small company that installs marine electronics. My blog is built in part around the Whiskey Tango Foxtrot moments I encounter working on boats both large and small. These stories typically have one of three themes.

Inappropriate application of technology on boats, design/construction doesn't anticipate the customers future basic equipment installation needs, and boats which are extraordinarily difficult to maintain due to assembly/access issues or lack of documentation.

An example of one of these stories is here.

I have rules about these stories. The manufacturers are never mentioned, and the pictures are all close ups to make it impossible to identify the specific boat. My intent is to have builders improve upon these issues, not to point a finger, or hurt someone.  If you had some time to talk with me about the designers role in this, I would very much appreciate it. My suspicion is the designer largely plays little role in these issues, and the fault mostly falls with the manufacturer. If you would rather not, I understand, I have scared a couple designers away already, even with the opportunity to have some control over the content. Anyway, thanks for any consideration. Tnx Bill

The silence was deafening. I was in space, and you couldn't hear me scream. A mote of dust settling on a feather, the tree that fell in the forest. You get the picture. I know one firm read one of the story links I included, and the others not so much. In retrospect I shouldn't have expected any of them to want to assist me. What, help the guy who's always disparaging boat design and construction? He's a witch, burn him! I suspect the truth is whether they are in some way responsible for the problems I write about, or not, they may have been involved with boats that I have had less than kind words about. They are numerous to say the least. 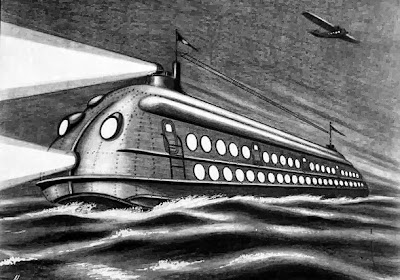 With Xmas just around the corner our buyers have been searching high and low for holiday gift items for the truly discriminating boater, and these unique new items are now available. Don't wait, stock is limited on some items, and we can assure you these are only available at PIC, your exclusive high end marine chandlery.

The Parmain laboratory at work.

I think this should start with introducing you to Morgana. I have had a long association with this vessel starting with my encounter when electrolysis severely damaged her rudder, and more recently with my Acticense and NMEA adventures. She's a beautiful custom built gaff rigged ketch whose lines come directly from the sailing coasters of the early 18th through the start of the 20th century. These were the coastal trucks of the seas that transported cargo, and passengers from port to port. There are a small handful of original coasters left sailing today mostly used as tourist attractions or museum exhibits. They became obsolete with advent of the gas engine, and by the 1930's they were almost extinct. Nowadays the term "Coaster" applies to any of a variety of smaller vessels that provide coastal area transport services. 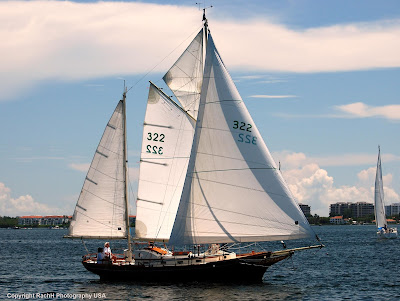 When launched in 1945 just days after the end of WWII, she was the largest ship in the world, and is still mightily impressive today. There are many who tell her history, and of the 225,00 sailors who lived on her during 47 years of service. I will leave some links behind for you to explore. I had some spare time during the NMEA conference, and visited the USS Midway Museum, a most worthy way to spend a few hours. Today we are talking about some of her navigation gear history. The USS Midway offers a slice of navigational equipment history spanning two generations. 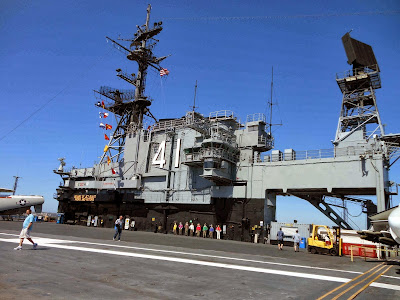 My eyes snapped opened at 5:00 am. It's Saturday morning in San Diego, and I'm heading back to Sarasota after the NMEA conference. Marine electronics propaganda is secured. My scattered clothing is gathered, and hung in the bag. A final sweep of the room ensures I haven't left anything behind. I head down to the lobby to check out, and grab a coffee. I'm doomed, and don't know it yet.

The San Diego Sheraton is right next door to the airport, and I'm whisked there in less than five minutes. Finding an empty ATMesque check in computer my e-ticket number gets scanned in. There's my seat assignment alright, and it sucks. The dreaded center seat in which it's guaranteed you will be squashed in-between a 300 lb professional wrestler, and a mom holding an infant that is crying nonstop and needs its diaper changed. Despite the fact I had purchased the ticket five weeks before the flight, the coveted aisles had been booked. I study the remaining options and what's this? An exit row aisle seat is available. That's great, it means if there is an accident I'm the first one out the door, but it requires paying another $27.50 to get it. Grimacing, I swipe my card, and acquire it, a most fortuitous decision it turns out.

I wait patiently for boarding. "We're boarding our super deluxe platinum members, and service men and women in uniform. Gold card holders, and passengers with small dogs in strollers may now board. We are now welcoming aboard our advantage plus members and all one eyed passengers. Silver plated club members may board at any time. Now boarding group one. I stare at my ticket and sigh. I'm group four. 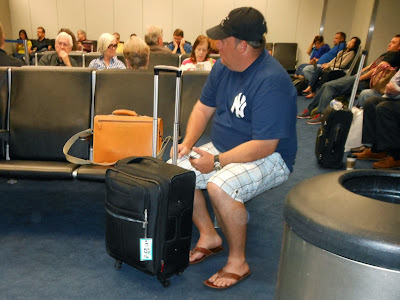 Jaytron, is my favorite marine electronics distributor. I can't remember how long I have dealt with them but its been many years. They're fair, have a smart staff, and a huge inventory. The conversations I have with them often go like, "Hi Frank, it's Bill, I need one of these Seaview round wedgie thingys for a KVH M1 satellite system mount and a Ray backbone kit, you know, the one with really long blue cable. Yeah that's it, the 20m cable is the right one. Thanks Frank." A large amount of my transactions are done from my cell phone whilst milling around in my less than palatial vehicle trying not to run over tourists. The slow ones at any rate. I rarely have part numbers at hand and rely on their very experienced staff to help me. Jaytron however has another huge asset.

Today is different, I'm waiting patiently in line at Jaytron clutching a large canvas bag. Vinnie, wearing a black suit and holding a clipboard is manning the rope line. "What's in the bag buddy?" inquires Vinnie. I quaver, "It's a Ray classic E-120 with no back lighting, and a classic C-80 with a broken on off switch. Vinnie stares into the bag for a second, then reaches back, unhooks the velvet rope, and says "The Fixer will now see you." 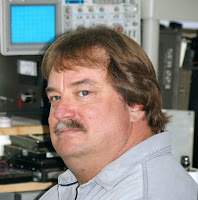 The Fixer is Steve Senft, a quite remarkable and extraordinarily talented professional. He was an electronics warfare tech in the navy, and afterwards worked for several contractors including GE on Andros Island. For the last twenty years he has been associated with Jaytron repairing marine electronics and amateur radio gear including single side band radios, one of his many specialties.

The museum of shattered video dreams

Despite the video's title, it was, but now isn't going to be used. Every year I enter the Boating Writers International writing contest in the "Original Online Content" category.  This entry has required a 300 word essay be submitted answering questions about your journalistic standards, media forms you use and others. In the past few years I have done cartoons as my essay form. They are still 300 words, but the toons are more fun to do, and in many ways exemplify more adroitly what I'm trying to do with the blog. Dealing with work and tech, while having a little fun at the same time. The Rant is my real voice, and if you have heard me speak, there is no difference.

Xtranormal, the software, and website that I used to create these went out of business on July 30 2013 with little notice. I still had credits, so I did this piece, and finished on July 29th. This is one of the last ones made. It was buggy software, and the computer voice spoke phonetically requiring some real gyrations at times to make it understandable. If I wanted a character to say NMEA, it would look like "Knee Maa." To make the voices clear required some tedious editing, and in this case it took about two days of mucking around to complete it.

But the contest doesn't close until December 31st you're thinking, why now? Well it got some attention the first time I used a toon, and I actually won third place. So if I won the second race at the track, by betting on the number two horse, why not try it again? I think I haven't won again not because of the cartoon essays, but maybe poor my choices in entry selections. I tend to pick the ones I had the most fun writing, which maybe aren't the most glowing examples of my writing skills, and perhaps lacked the gravitas expected of a professional boating writer. I had fun writing them though, and who else would tackle these subjects in this way? Senators all named after boils?

In the end I have to be fresh, new, and on the cutting edge, while still being slightly irrelevant. I have found it! Tech galore, stretching audio editing to it's very limits, and animatronics to boot. You will be able to see it right after the Miami boat show when the winners are announced. I can already see myself accepting the keys to the city while holding the first place plaque. I hate to waste work product. There's sort of a bartender joke along with some insider gaffs, and references. Here is the not to be used unused essay.

Posted by Bill Bishop - Parmain at 8:57 AM No comments: