The accidental lesson in 72 Colregs "Lines of Demarcation"

Today I'm channeling James Burke, author of "Connections, and the host of the like named PBS TV show. The story starts with a boating accident, we learn a bit about "Metes and Bounds" surveys, and then onto, hopefully in a James Burke "Connected" way to the mysterious 72 Colregs "Lines of Demarcation".

Doc and Jean were in a bad boating accident, and this happen on the very last day of their "Great Loop" trip. They are friends of mine, and own the boat you see on the title page of this blog. Both are very skilled boaters, and multi engine rated pilots. They have logged over 10,000 miles on their 44' Manta power cat. The boat was heading south down the west coast of Florida, on auto pilot, about 10 miles offshore, in three foot seas. Doc had a call to nature, so he cleared port, starboard, and ahead for traffic, Jean takes the helm, and Doc goes to the head. This is where the first technical error occurred. When Doc looked port, he did not look port, and way off to the aft behind the boat. In the distance behind them, was lurking another boat, also on autopilot.
So this is what happened. The boat behind them was a crab boat, and all of the crew was aft throwing crab traps out. What Jean sees initially, out of the corner of her left eye is a boat that is crossing her bow from the port side at an angle.
There is a huge impact, and the crab boat is impaled at amidships by the Manta's bow. Doc is catapulted out of the head into the next cabin, and Jeans slams into the helm. Both boats still have engines running, and the two boats start to turn in circles together. Jean shifts the boat into reverse, and backs off from the crab boat. One of the bows had been literally been torn off Doc and Jean's boat. The crab boat, seeing that the Manta wasn't sinking, and they were, started toward land, and shallower water. Doc scrambles up to the helm, and he is badly hurt. 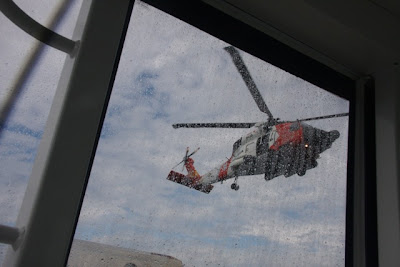 A Mayday goes out to the Coast Guard, and shortly a chopper is above them. An interesting side note about the Mayday call was the Coast Guard initially was requesting their position in TD's, and it took a few extra moments to sort this out. Doc gave them the Lat/Longs. 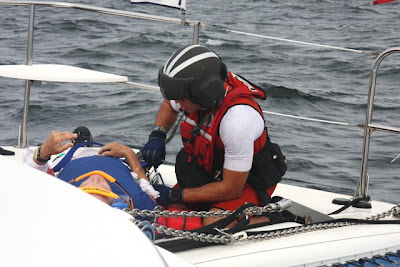 Jean tends to Doc, and a medic is dropped from the chopper on board. He takes one look at Doc, and says "you're leaving". On the bow of the boat, Doc is strapped in, and lifted up, up, and away to St. Petersburg's Bayfront hospital. 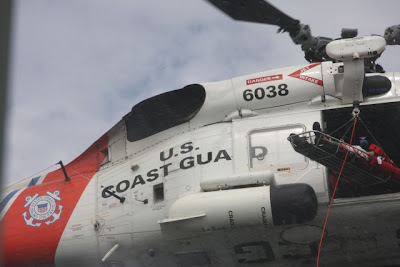 Jean is left on the boat by herself briefly, until a Coast Guard vessel shows up. The crew gets her description of the accident, examine the boat, and decide it can be "very" slowly limped into shore. They assist Jean in getting the boat to the only available dock in the area, and this happens to be the floating town dock in Cedar Key Florida, and I mean this is the only dock in Cedar Key, and there is no other dock for 40 miles, or more in any direction. The bow was ripped off about 6 inches above the waterline, and back about three feet at the deck. A 6" wave would put water in the bow compartment. The boat could not be moved, without temporary repairs. Jean was taken home by her daughter. I orchestrated temporary repairs, and five painful days later, the boat was moved to a location where real repairs could be made. I may tell this story later, but this is not a place to be with your boat, if you have a problem. 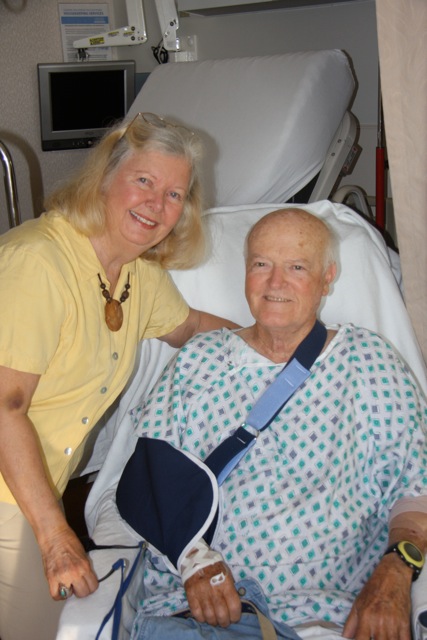 Doc was pretty beat up, lost a lot of blood, (the boat looked like a CSI serial killer crime scene), had a bunch of things cracked, but he's a tough bird, and after a few weeks he was up and running again.
The Coast Guard does their investigation, and Jean (she was at the helm at the time) gets two citations.

The first was under rule five, Lookout: Every vessel shall at all times maintain a proper look-out by sight and hearing as well as by all available means appropriate in the prevailing circumstances and conditions so as to make a full appraisal of the situation and of the risk of collision (the other vessel violated the right of way, but being technically right was not much of a bonus.)
The second was under rule seven, Risk of Collision: (a) Every vessel shall use all available means appropriate to the prevailing circumstances and conditions to determine if risk of collision exists. If there is any doubt such risk shall be deemed to exist.
(b) Proper use shall be made of radar equipment if fitted and operational, including long-range scanning to obtain early warning of risk of collision and radar plotting or equivalent systematic observation of detected objects.
That's the technical jargon, I will now translate these tickets, an a way everybody will clearly understand. Under rule 5 "Lookout", if you have been in any kind of a boating accident, you should have been looking out for other boats, so unless a bunch of Nazi frogmen in a submarine surfaces directly under your boat, you will get this citation.
Under rule 7, if you have an operational radar, and it is not on at the time of the accident, and in this case it was not, you will get a citation. If you have a radar, it should be turned on, and used while underway.
After the accident, Doc and Jean speak with a maritime lawyer, and the lawyer wants to know if the accident occurred in international waters, or inland waters from a "Rules Of The Road"  viewpoint. They ask me to find out. No problem, I will look at the track on the chartplotter, see where the accident happened, and tell you. I could see exactly on the chartplotter track where the accident happened, but now where are those pesky Lines of Demarcation? I get the paper charts out, nope, not here either, so off to Google I go for an answer.
With the exception of where the Lines of Demarcation pass across a harbor entrance, or the ilk, these lines do not appear on your charts. Look at where the red arrow is pointing, and you will see a pink dashed line and a note off to the left side saying "Colregs Demarcation Line". These are the only places on your charts where you will see them.

These lines do exist, but in a "Metes and Bounds" written format. This is a very old survey system style, that uses compass directions, distance, and descriptions to define boundaries. For example, a property boundary  might read "Beginning at a stone on the Bank of Doe River, at a point where the highway from A. to B. crosses said river (see point marked C. on Diagram 1); thence 40 degrees North of West 100 rods to a large stump; then 10 degrees North of West 90 rods; thence 15 degrees West of North 80 rods to an oak tree".... This is an overly simplified description of this system, but here is a real description of  "Lines of Demarcation".
Race Point, MA, to Watch Hill, RI.
(a) Except inside lines specifically described in this section, the 72 COLREGS shall apply on the sounds, bays, harbors, and inlets along the coast of Cape Cod and the southern coasts of Massachusetts and Rhode Island from Race Point to Watch Hill.
(b) A line drawn from Nobska Point Light to Tarpaulin Cove Light on the southeastern side of Naushon Island; thence from the southernmost tangent of Naushon Island to the easternmost extremity of Nashawena Island; thence from the southwestern most extremity of Nashawena Island to the easternmost extremity of Cuttyhunk Island; thence from the southwestern tangent of Cuttyhunk Island to the tower on Gooseberry Neck charted in approximate position latitude 41°29.1' N. longitude 71°02.3' W.
(c) A line drawn from Sakonnet Breakwater Light 2 tangent to the southernmost part of Sachuest Point charted in approximate position latitude 41°28.5' N. longitude 71°14.8' W.
(d) An east-west line drawn through Beavertail Light between Brenton Point and the Boston Neck shoreline.
Piece of cake, now you know, in a somewhat antiquarian way, exactly where they are for this part of the east coast.
All in all, I enjoyed this intellectual exercise. Like most of us, I knew what the Lines of Demarcation were for, but not where they actually were, and it took some level of effort to find them. I have attached the link below to a Navy site with them. So in a James Burke sort of way, we have connected the "Colregs 72 Lines of Demarcation", to "Metes and Bounds surveys", to an accident off the west coast of Florida, and learned that short of having a submarine full of Nazi frogmen surface under you, what kind of tickets you can get from this type of unfortunate event.
Despair not if you don't know exactly where the Lines of Demarcation are, because as a practical matter there are now few differences between the international, and inland rules of the road from the average boaters perspective. I was thinking about how you could add them to your chartplotter, and I think the easiest way to do it would be to build a route following the lines in your area. You could also blow the dust off your parallel ruler, and divider, and with one of those old fashioned pencil things draw them on your paper charts
Doc and Jean are currently in the Bahamas, running their radar all the time, (I have done some additional MARPA training), and the boat is now sporting a shiny new Garmin 600 AIS transponder. They are now ever more vigilant.
For those that are interested, below is the Navy site that sports the Lines of Demarcation.
http://www.navcen.uscg.gov/mwv/regulations/33CFR080/33CFR80.htm


James Burke is a well known author, and was the host of the PBS/BBC TV series "Connections". His view of the history of science is most eclectic, and  demonstrates that where you start out in history is never where you end up. So if you want to know what the invention of plastics has to do with development of the Flyut, a type of Dutch cargo ship, this is the guy who knows. Here is the link to the Wikipedia page about him, and the TV show.
http://en.wikipedia.org/wiki/Connections_(TV_series)
Posted by Bill Bishop - Parmain at 5:11 PM 2 comments: