That's entertainment, not! How Machiavellian can you make it?

Kate and I kept our sailboat in Midland Ontario, and cruised Georgian Bay for many years. Our entertainment system consisted of a good battery powered boom box, and a 5" black and white TV. Since most of the places we gunk holed in, had no television reception at all, the TV was only used occasionally to provide me with a news fix when we were in a larger port. The boom box was used all of the time, you gotta have tunes, and these things always worked.
Entertainment systems on boats are becoming horrifically complex, and are some of the most technically challenging jobs I do. Most installations I deal with have a few things in common. The first is the lack of any wiring diagrams. If you've ever stared at the back of your new television, there must be an almost infinite number of ways to connect systems together, and no two boats are ever wired the same. This is already making my head hurt. The second thing, is access is alway difficult. Unlike your system at home, you can't just pull the cabinet away from the wall, sit behind it, and sort out the wiring. Why, it's a boat of course, and easy access is against all of the rules. The last common element, is every TV/Sound system installer's label maker is broken, why else would all of this wiring be unlabeled?
So how complex can it get? The picture below is an example. This is a sixty foot late model trawler. What you're looking at on the floor, is a two terabyte Alienware Hanger 18 Vista based media server. Having Bill Gate's operating systems on a boat always makes me nervous.  In the cabinet on top, is a powered HDMI  splitter. Below it is a JVC Hybrid amp/source selector, and below that is a AV back up UPS unit. What you can't see, is the audio encoder that talks via ethernet to the Colorado Vnet music server that is located in the pilothouse. Add to this touch panel displays, Ipod interfaces, two large external USB hard drives, surround sound system, vessel wide, zoned speaker system for music, keyboards, mice, dongles, and a drawer full of remote controls, and OMG, next to no documentation. On top of this, the system was installed by a home theater company, that was located at least a thousand miles from the nearest ocean. Oh yes, another installer later modified the system, to the point where almost nothing worked. In the mix is the fact that the home theater installers apparently were not aware of the shore CATV cable system in the boat, because it was never connected to anything, and the same for the SeaTel system. I think they were just mysteries to the installers, and no TV's for you, only monitors. The sound has to be routed through  the music server, and then to speakers via the touch screen displays. 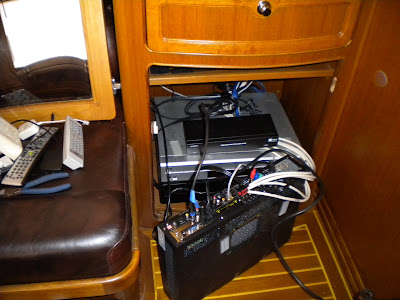 It's going to be all okay. After some e-mailed photos, along with some long discussions with the very helpful original installers about how the thing worked, and some sleepless nights pondering the issues, almost all the problems are solved. The few minor ones left are now solvable. The monitor in the main salon was changed out for a TV. The CATV system was located, connected, and the vessel is now plugged in to Comcast cable at the dock. For the first time, since the boat was built, the owner has been able to watch TV on the boat. None of the equipment fit into the cabinet, and I modified it so it now does, and the door can now be reinstalled. A fan system has been ordered, to cool the cabinet because the Alienware gear gets hot enough to cook eggs on. All of the wiring is being labeled, and I am preparing installer notes to help the next poor soul who has to deal with this eclectic collection of advanced technology. 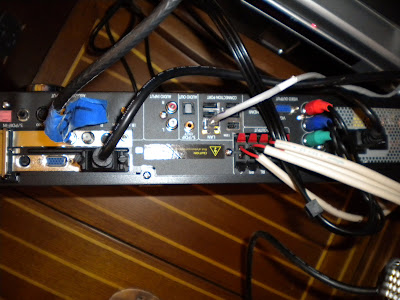