A Yamagull and the "Bermuda Around The Island Race"

What you are looking at above is what they call in Bermuda, a "Yamagull" owned by a gentleman named Brian. It is a clever marriage of a Seagull outboard with a Yamaha lower unit, a modified exhaust system, and many other changes. So what do you do with this strange hybrid machine you ask? You use it in the "Bermuda Around the Island" race. This is one of the most unique, and interesting boating events out there, and there are also several versions of it world wide.

The first rule is that all boats in the event must be powered by a British Seagull engine. You see these cranky little British engines on many a dingy world wide, and I own a 2 HP Seagull myself. There are multiple racing classes that are divided into antiques, by horse power, and the modified Seagulls. If you are using a modifed Seagull, you can do almost anything you want to the engine, but the block can't be modified. Maybe it can, the rules seem some what variable depending on where you are, but some part of the Seagull engine remains. You can also burn any fuel you want in your modified engine, although some of these engines do not alway survive the race. Like veal, they live fast, and die young

You must have at least two persons in the boat, proper safety gear, and I think I heard a case of beer had to be in the boat, at least when you check in. The course is about 40 miles long, and circles around Bermuda. About half of the course is in the lee of the islands, and the other half is in the open Atlantic, and at times it can be very challenging. The boat's design has to take the Atlantic's seas into consideration

And so this is where the story starts. Once upon a time Parmain built boats. This was a most satisfing thing to do, but a very tough way to earn a living. After losing prodigious sums of money, I added boat building to my "Museum of Shattered Dream's" vast collection, and only do repairs now. But back to the story. I get a call from Malcolm, who lives in Bermuda, inquiring if we could design a fast boat for the Bermuda race. It sounded like a fun project so I said yes, and send me some pictures of  typical boats used in the race. The pictures below are of some of the boats used in the race. They all have long wetted waterlines, are fairly narrow, and you can see the builders have done an excellent job of crafting their vessels with much pride. 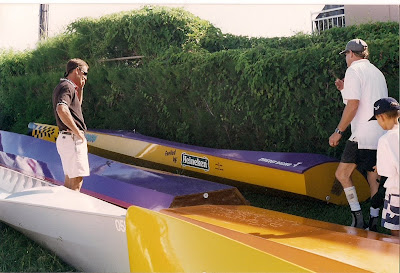 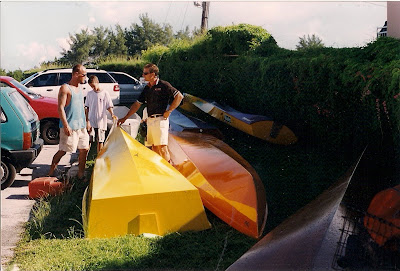 We started with a design that was very light, and would hopefully plane with 5hp, and two people in the boat. the primary design effort was done by Chris Doughtery, naval architect John Marples suggested widening the bow to improve water flow around it, and my friend Chris Wright who is a structural engineer of great talent, provided input on the construction details. Lloyd's grade 1/8" marine plywood was used to construct the boat, and the bilge areas were hollow. All the bulkheads had holes drilled in them to lighten them. It was similar to building an aircraft wing. The weight was about 100 lbs, it did plane well, and she was a beautiful vessel. 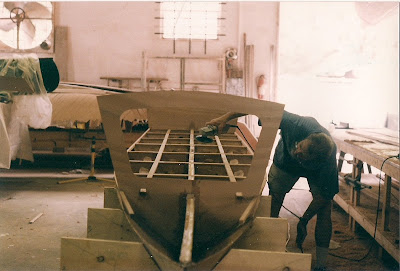 Malcolm flew over from Bermuda, and we tested the boat in Sarasota bay with a borrowed engine. It performed well, and we arranged to have it shipped to Bermuda. 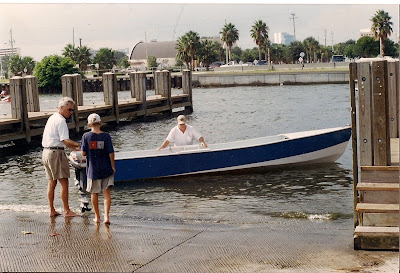 When the boat arrived in Bermuda, Malcolm put the graphics on, and had a mount fabricated for his Seagull. 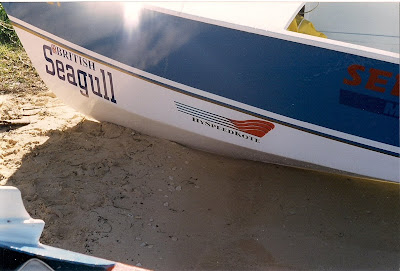 I shamelessly brought over my own graphics when I flew over to the watch the race. 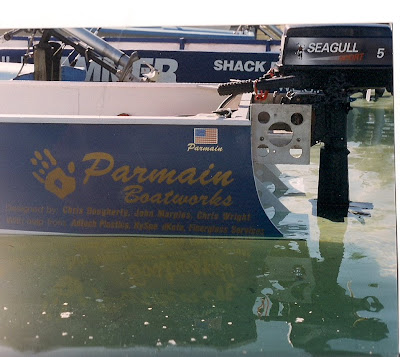 You can see some of the Seagull's and steering arrangements. 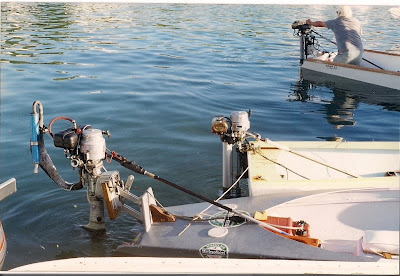 This is Toothpick, another example of racing boat design. 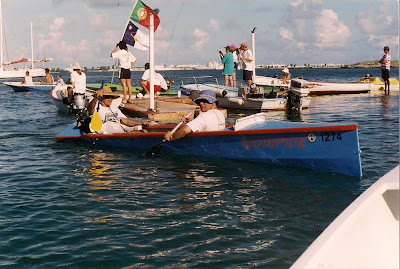 This was a most excellent adventure, and Bermuda is a beautiful place. The people I met were fun, and generous to a couple of Americans who were visiting. Malcolm, and his family were wonderful hosts, and we were appreciative of their warm hospitality.

The most fascinating thing about the race is the evolving boat designs. I saw pictures of earlier boats, and races, and you could see the designs change over time. I came back the next year, and was pleased to see a couple of the new boats had used some of the design elements that we had used in Malcolm's boat. They are quick learners in Bermuda.

I wish that maybe someone like Mercury Marine would put together this type of a race here. I would like to see what a 5hp Mercury would look like if a NASCAR team got a hold of it, and what the boats would look like here. Hmmm, maybe all black string composite construction with hydrofoils .
Posted by Bill Bishop - Parmain at 1:39 PM 1 comment: