One of the most important lessons I have learned in life, is that everyone has a interesting story, if you stop talking yourself long enough to listen, and boaters always seem to have more interesting stories than most. This is the first, of a intermittent series of stories about some of my clients.

So let's go meet Steve Padar. This is Steve's backyard, and his boats. He has, a small Scout center console, and in the background, his Grady White walk around. He had a third boat on blocks in the back yard, but I suspect in order to maintain martial bliss, he was advise of the right answer to the question of "When is that boat leaving the yard?", and it is now gone. Do you see that rounded structure to the right, that is a telescope dome. I met Steve when he requested a little help with installing a Raymarine weather receiver for the Grady White, although he was more than technically capable of doing this himself. 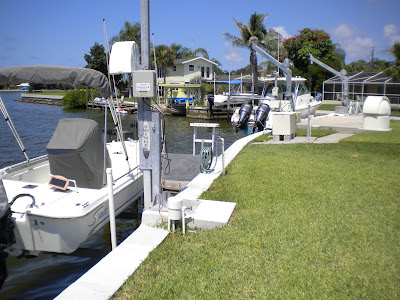 When I first visited Steve's house, and while walking up to the front door, my keen powers of observation told me there is something different about this house. 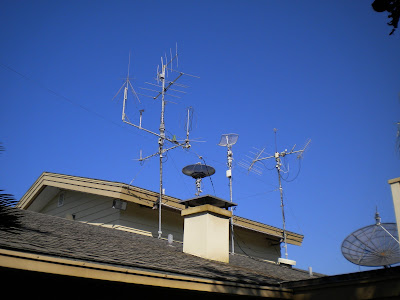 And also in his backyard, you quickly develop the opinion, that Steve is doing something more than trying to receive blacked out football games on the sly. 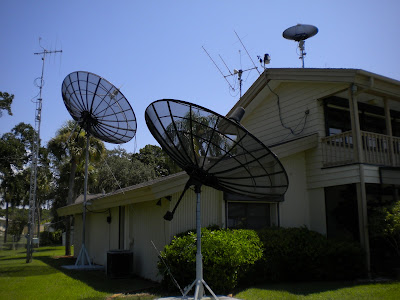 So here is Dr. Steve Padar, from Sarasota Florida, who in real life is a practicing neurosurgeon, and he graciously allowed me to see his metaphorical man cave, and what a technological wonder it is! 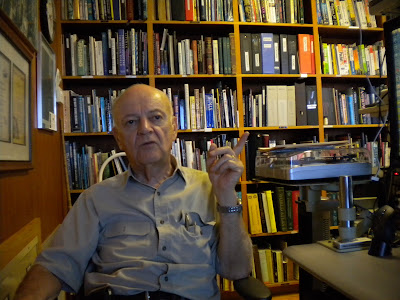 Everywhere you look, there is something to see. A full wall of floor to ceiling books, and racks of equipment everywhere. Behind this equipment wall is a long desk with two very large flat screen monitors, and a half dozen computers under it. 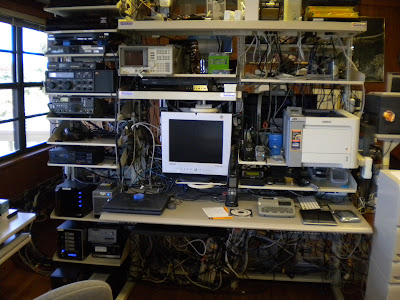 Another large desk is packed with lots of ham radio gear. 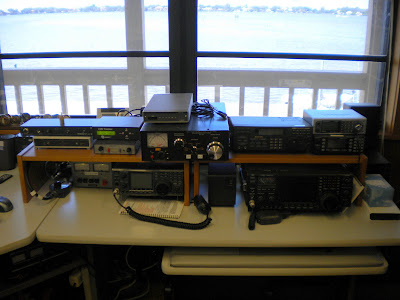 Wiring galore everywhere. These bundles are the feeds from the exterior antennas. 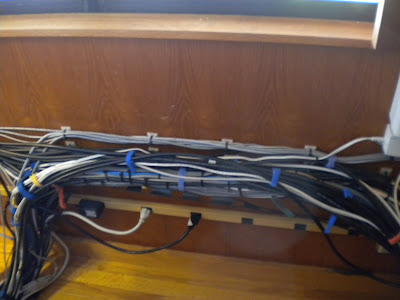 And lots of Ethernet connections tying systems together. 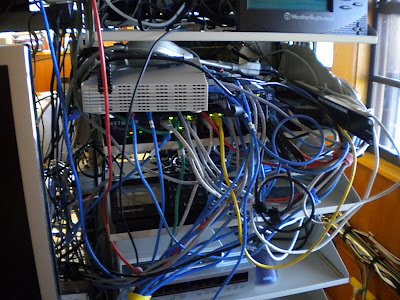 So what is this room all about? In addition to being a ham radio enthusiast, one of several of Steve's hobbies is the acquisition, and direct down loading of weather photographs from NOAA's satellites, and this is not a trivial task. The pictures below are from the GOES 12, and 13 satellites. These are geostationary  satellites parked over the equator at 75 degrees W (GOES 13), and 60 W (GOES 12), and they were being downloaded as I watched. 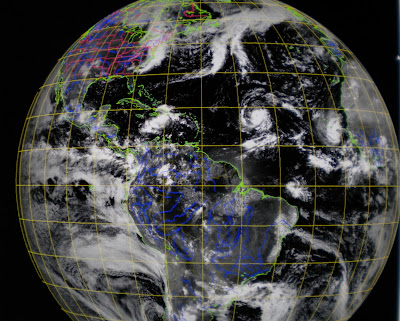 These photos were downloaded on Sunday, September 5th around noon EST. In the full frame picture, you can see hurricane Igor, and behind it, you can see the tropical depression, that will become hurricane Julia. My camera does not do the quality of these pictures justice. 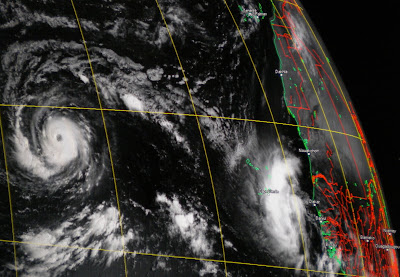 Above is a better view from GOES 12. You can see Igor clearly, and Julia to be, is just off the African coast. Although it takes substantial technical acumen to receive these photos from a geostationary satellite, Steve's equipment can also receive photos from weather satellites moving in orbit. This takes another level of technology. You need software that will provide you with Mr. Kepler's orbital data predictions, the antenna axes kinematics have to be programmed to intercept the track, and match it. The satellite signal has to be programmed into the system to receive the signal, and if this wasn't enough, as the satellite approaches you, and then moves away, the signal undergoes a Doppler effect that shifts the frequency, and the receiver has to compensate for this shift. This is a very simplified explanation of a very complex process.
Steve's equipment can receive frequencies from 50 kilohertz to 2.4 Gigahertz, although to be technically correct, he can't receive every frequency in this range, but he does handle a good swath of it. Amazing, and technologically stunning to say the least, and all of this hidden in plain sight in a lovely bay front home.
We're not through yet. As if this wasn't enough, Steve's other hobbies are travel, boating, diving, and photography, and he excels at all four. He has traveled all over the world with his camera, from the Antarctic peninsula, to the North Pole and many locations in between. Diving in Truk lagoon, the Galapagos Islands, the Australian Great Barrier Reef, and many other exotic locations, and taking magnificent photos along the way. 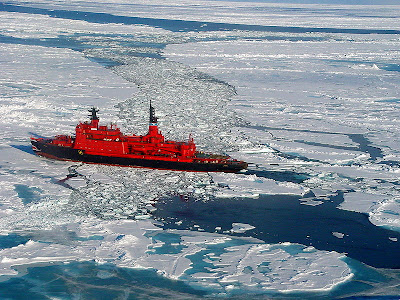 I mentioned that Steve visited the North Pole, something that most of us will never do. He traveled there on the Russian icebreaker the I/B Yamal. This is the pride of the Russian icebreaker fleet. It is just shy of five hundred feet long, and is powered by not one, but two nuclear reactors, and weighs nearly one million pounds. This ship will crunch some real ice, and real ice had to be crunched to get to the pole. Only about a dozen trips by ship have ever been made.
As a footnote to the story, I was looking for a picture of the I/B Yamal, and you are looking at it above. The picture was taken Aug 3rd, 2001 while in route to the North Pole. In the picture, of the not easy to get certificate below, there are three notable things about it. The location is 90 degrees north, you can only get it if you have been swimming at the North Pole, and it is dated August 5th 2001. So Steve is actually on the I/B Yamal at the time the picture was taken. 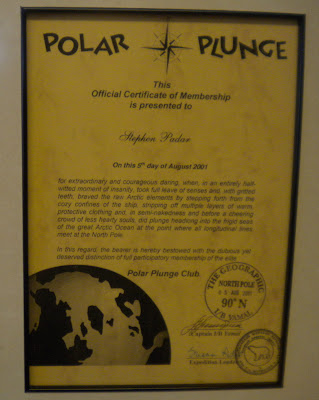 Now you have met Steve, doctor, neurosurgeon, boater, traveler, photographer, diver, and intensely curious about the world around him. I know he will demur, but he is a modern day renaissance man, and an extraordinary, and gracious person to spend time with. All of us have a bucket list. I think Steve's bucket is really a fifty five gallon drum and still mostly full. I am working on being a better listener, and thank you very much Steve for the time you spent with me, it was most enlightening, and pleasurable.
You can see some of Steve's terrific photography here. You may need to download the Photodex.com viewer to see the shows. Check out the Antarctica, and Truk Lagoon slide shows, but there is much more to enjoy here.
You can learn more about the Ice Breaker Yamal here.
The Photograph of the I/B Yamal is from Wikipedia commons, and was taken by Wolfratz
Posted by Bill Bishop - Parmain at 4:03 PM No comments: