Since I wrote the story  "PC" purgatory, I had looked everywhere, for a Crazy Mouse problem solution and had received a lot of advice, but none of it worked to date. I asked for help and got it. My friend Alan had forwarded several possible options, and among them was this  link as a subset of  a young fellows home page
. 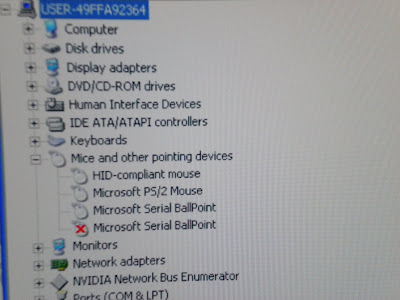 I posted the possible solution on Panbo's forum, and Henning Durr gave me encouraging words regarding the viability of the solution. I installed the registry patch today, and it worked perfectly. No more crazy mouse, with three serial GPS's plugged in. No more disabling serial ballpoints, it just worked. This was an XP system by the way, and although I think it will work with Vista, and Windows 7 tread carefully, and I think sobriety is required while doing this, we don't want an ARI (alcohol related incident)  to occur you know.
The solution is simple, and consists of  using Regedit in the PC to change two numbers. The changes are below:
[HKEY_LOCAL_MACHINE\SYSTEM\CurrentControlSet\Services\sermouse]
"Start"=dword:00000004 (the 4 was a 3 before)
[HKEY_LOCAL_MACHINE\SYSTEM\ControlSet001\Services\sermouse]
"Start"=dword:00000004 (the 4 was a 3 before)
If you want to go back, just change the "4" to a "3", and you can have the crazy mouse back. By the way, your serial mouse will no longer work, so get a USB mouse before you start this, if you need to. I just went into the registry and manually changed the values. It took about ten minutes to do. If you are faint of heart, find a 12 year old kid to do it for you. Why does it have to be so complicated?
Thanks JamieZX, clever patch, and a good problem solution.
Posted by Bill Bishop - Parmain at 4:52 PM No comments:

Searay redeaux, and the "Laws of unintended circumstances".

This is a make over story, that also illustrates the "Laws of unintended circumstances." The vessel below is an older, but well loved, and cared for Searay. The chartplotter you see below (upper left) is a old Northstar unit that finally bit the dust. The Furuno below it is an older, but fully operational GPS chartplotter, and radar. After discussing what to do with the owner, he decided to install a new Garmin 5212 touch screen unit to replace the now deceased Northstar, and since the older Furuno radar was still working well, he would keep it in place. 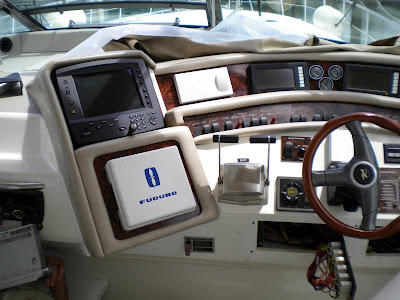 Searay, and many other builders, used burled wood looking plastic panels in their consoles. The exact match to the existing panels is no longer available, but the owner found a 2' X 4' piece that was a close match, and it was decided to use the new plastiic for the location where the new Garmin was going to go, and to replace the lower Furuno's panel with the same material. So out come the units, leaving two gaping maws in the console. 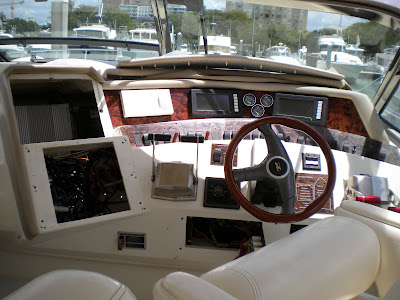 So far, everything has gone according to plan, the units came out, along with the old panels. The panels were delivered to Delcraft for fabrication, and unbeknownst to me, the "Laws of unforeseen circumstances" were just getting ready to go into effect. Behind the Furuno is what I call a "Spaghetti Bowl". These occur through the years as layers of new wiring, get laid over the old wiring. This was also exacerbated by the owner cutting a lot of wire ties, in an troubleshooting effort to identify the now defunct Northstar wiring. 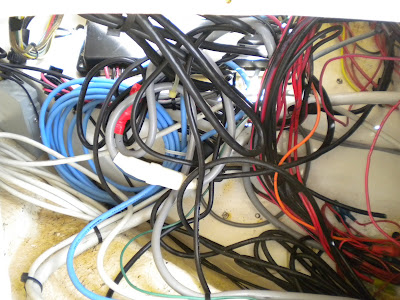 It's not that I have a social conscience, I was a salesman for thirty years, but when I saw the spaghetti bowl behind the Furuno, I couldn't just leave it that way, and I asked my young helper to pull the old Northstar wiring out, and clean up the mess. The boat was stinking hot, and along the way, I was told he found a red wire that wasn't attached to anything, and what should he do with it? I'm not surprised that you find extra wiring, especially in an older boat, and I just said "tie it up". 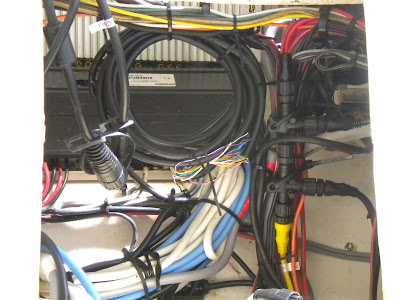 After the wires were tied up, the new Garmin 5212 was tested, the software was upgraded to the current level, and I was pleased with the appearance of both the new Garmin, and the two new panels. The work looked factory original, and I don't think a visitor could see the slight difference in the color of the new panels. 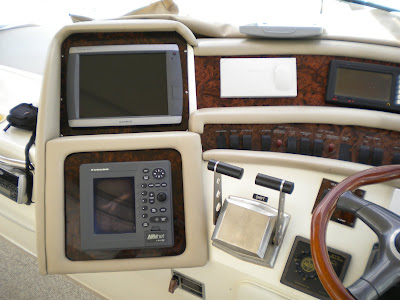 Anyone who repairs anything, whether it is a boat, car, or plumbing, is familiar with the phrase, "Everything worked perfectly on my whatever, until you fixed the whatever". "The "Laws of unintended circumstances" come in three less than tasty flavors.
The first flavor is "Bile." This wretched flavor comes from someone who knew it wasn't your fault the whatever is broken, and is just trying to see if you will fix the problem for free. Fortunately, I have only had this happen a couple of times, and these people are no longer clients.
The second flavor is vinegar. This flavor occurs when the client, thinks you broke it, but you really didn't. You changed the bow light fixture, and now the radio in the console is broken. These apparently unrelated events can link together, in an owners mind, in many weird, and wondrous ways. Lets see now, they both use electricity, I have a beard, Abraham Lincoln has a beard, so I must be Abraham Lincoln. You go to the console and pull out the rusted hulk of a ten year old car radio, and say really?, seriously?, really now, and hand it to the owner. The knobs won't turn, the antenna wire has corroded into oblivion, and you watch as water drips out of the chassis. Truth be told, this does not often happen, and the owner is not trying to intentionally screw you. He or she truly believes this is a fact, and with some minor efforts, the issues almost always resolve themselves.
The last flavor taste likes alum. You get this mouth puckering flavor, when the "Everything worked on my whatever, until you fixed the whatever", and it is your fault the "whatever" no longer works. In the case of the Searay we are discussing today, I blithely mentioned to my colleague to tie up that red wire mentioned above, and didn't think anymore about it. It turns out there were actually two red wires, and they fed power to the relays, that turn on the Caterpillar diesel's control panels. The engines ran fine, but had no instrument displays to tell you what they are doing. Sometime in the past something changed in the console. The two red wires were connected the the ignition switches, and were tie wrapped on top of the original harness. The wires then kind of dangled their way unsecured over to the relays. All of the other relay wires were bundled together, except these two. In pulling in the new cables for the Garmin, and removing the old cables from the Northstar, the two unsecured red wires got pulled off, and were tied up with all of the other wiring.
I should have looked more closely, when I was told there was one unidentified wire, but I didn't, and the following morning I was back on the boat puzzling out what had happened. It didn't take long to fix, and the owners very graciously accepted my apologies for the faux pas, and were happy with the work.
In an odd sort of way, I have learned to like the alum flavor, unlike the bile, and vinegar flavors, you are going to learn something when your mouth puckers up from the alum taste.
Posted by Bill Bishop - Parmain at 11:02 AM 1 comment: