"That ain't going to grow back, it's broke, it's done, no glue or goo will fix it, did you really look closely at it?, and that is my professional opinion." This is my pronouncement as I look at the transducer while the boat is on the forks of the lift. The damage is the result of an untimely meeting of the transducer, and the wood bunk of a storage rack. Ah the miracle, and power of misapplied hydraulics. The boat, a middle aged 30'esque Searay had a Raymarine system, and I instantly knew what transducer was needed. 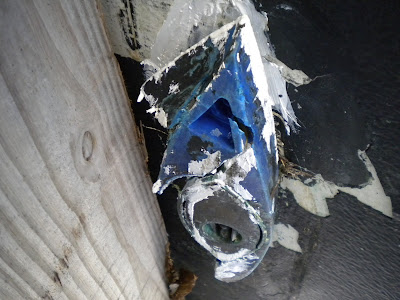 This unfortunate event occurred in a condo high and dry marina facility I often work in, and given the obvious mortification of the lift truck driver, I said I would do the replacement of the transducer at no charge, if the marina purchased, and paid for the materials. Karma is a wonderful, and cosmic thing. 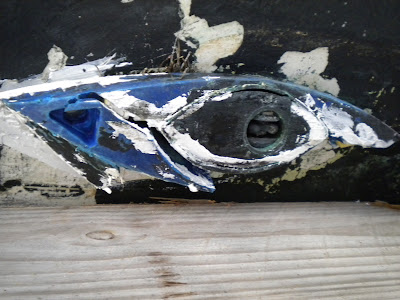 So a few days go by, and the new transducer shows up. A local mechanic friend is there, and he comes over to give me a hand. I open the engine hatch, and stare down into a compartment which is dominated by two huge engines. I squeeze myself into a space that was never meant for human occupation, and doing a sort of awkward half hunched kneeling thing, I reach down, and feel around for the nut of the bolt that holds the front end of the fairing block in place. Much to my chagrin, I can't find it, it's just not there, and I also feel a in-hull transducer mounted right next to the broken transducer.

I wriggle back out, dragging my wrist across a sharp edge of a tie wrap (Inset your favorite expletive here), and cut myself in the process. I take Plavix, (a price I pay for earlier lifestyle indiscretions), and any small cut instantly looks like a gunshot wound, and sends onlookers fleeing in horror. Out to the truck I go, and with some liquid bandage, and waiting the sixty seconds for it to dry, I'm back in business. I climb under the boat to stare again at the transducer, and realize I missed something when I first looked at it. Among all of the carnage, I didn't notice there wasn't a bolt installed in the front of the fairing block. Look at the picture above at the triangular area, and you can see it's missing, and worse, it was never there at all. 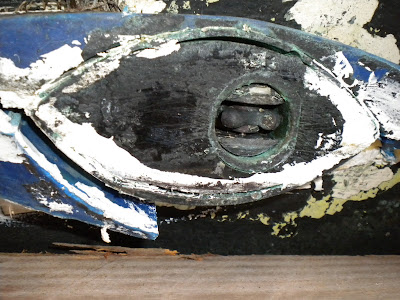 Who ever installed the transducer mis-measured where to drill the two inch hole, and the bolt would now be forward of the engine room bulkhead, in an inaccessible area under the fuel tank. The good news is they didn't drill the hole at all in that location. The bad news is the bolt's job is to stop the fairing block from twisting at high speeds, and causing it to leak. The installer's solution to the problem was to apply copious quantities of 3M 5200 everywhere to keep it in place.

The transducer still has to be removed, but the access to the big nut in the engine compartment is so limited, I can't break it loose, so out comes the angle grinder with a cut off wheel, and twenty minutes later it's history. A few minutes later all of the goo has been has been removed with an assortment of sharp implements. 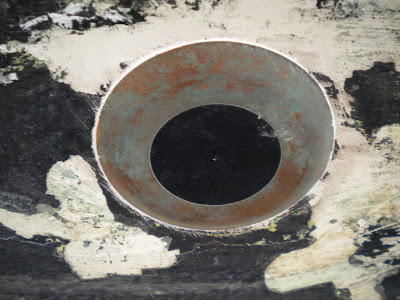 Now it's time to talk to the owner about the problem. I don't want to install the new identical transducer, for obvious reasons, and my solution is to replace it with a low profile tilted element transducer. No bolts, much harder for the fork lift operators to break, it will cost less, and all will be better for everyone.

A marina staffer dials the number, hands me the phone, and everyone retreats. Hi, I'm Bill, nice to meet you, this is the problem, and I think this is what we should do, no it won't have a paddle wheel, but you won't miss it, no SOG does not come from the paddle wheel in a Raymarine system, in the Raymaine system you only see paddle wheel "Speed" in a data box, and you don't currently have one set up, I'm sorry, but I didn't install it, this is really a better solution, no the transducer is made by the same company, and I can get one on Monday, you're doing a burial at sea on Sunday?, and you're  going on a trip Monday that has been planned for weeks?, can't cancel the reservations?, but you have depth from the other transducer, the problem is that you are running both transducers at the same time, and they interfere with each other, and on and on we go.

The owner is really a nice guy, on the phone at least, but I have not met him in person. In the end, I took an old Garmin transducer I use to test sounder modules, and installed it, to plug up the hole so the boat is usable. The owner will advise me when the boat is back from the long planned trip, and that boat had better be used on Sunday, and gone on Monday.

I write, I eat, I deal with marine electronics, and I'm hungry for more.
I install transducers in boats with "No Reservations".

The lines above are a small homage to Anthony Bourdain's "No Reservations" show on the Travel Channel. I love his writing style. The mix of both witty, and cynical ennui, with an almost childlike exuberance for all things pork, is most clever. His show is one of my favorites, and you can find his blog here.
Posted by Bill Bishop - Parmain at 12:52 PM 1 comment: