"Hi Bob, what's your script pitch this time?" "This a real winner Joe. I've given it the working title Wolfnado. It has everything you need to make a true Blockbuster. Vicious hungry wolves fall out right out of the sky and rip apart anything they see. It's got skimpy bikini shots for the teenagers, lots of guns, chainsaws, blood, fangs and no big words. I'm telling you right now Joe, this is really high concept stuff."

"Bob, that sounds great but how are you going to get it to rain wolves?"

"Joe, this is the high concept stuff I was talking about. There will be a huge storm that develops over Florida. Tornadoes will suck up thousands of hungry raging wolves. The storm then dumps them all over Miami Beach. There's plenty of cheap stock beach footage we can buy that will keep production costs way down."

"Bob, I don't want to rain on your wolf parade, but there aren't very many wolves in Florida if any at all, and the effects people are going to scream about the costs. Those fur computer graphics stuff ain't cheap and all those hemp wearing environmentalists will be on our asses also."

"How about sharks Bob? I mean who loves man eating sharks? Florida has tons of them swimming around and biting people? I don't even go to the beach because I saw that Jaws movie as a kid. We can make them out of rubber cheap, they can be reused and we can put fins on weighted skateboards and pull them around in shallow water." I'm thinking big. Big like "Sharknado." I bet you could write a script in about a week, and we could make it for chump change. Maybe around a fat million dollars. Hmmm... who could we sell it to? The Scfy channel maybe?" 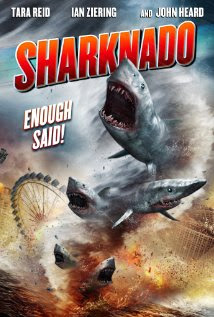