Morons at the gate. Just what were they thinking? 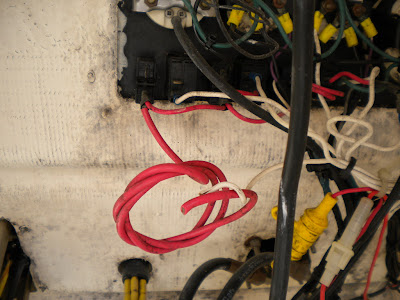 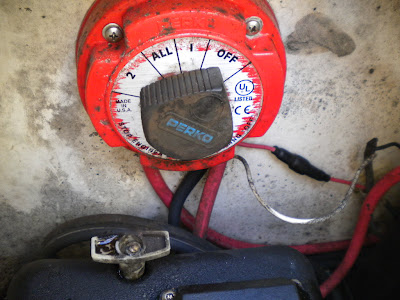 Just when you think you have seen it all, you find something new. This started when the owner wanted to install a new stereo in this center console fish boat. Sure, piece of cake, and it will take about an hour and a half. The owner also asked if I would look at the power feed on the boat to the console. He felt that there was some issue there, because things would turn off on occasion.
The holes get punched, the speakers and stereo go into them, and I climb into the console to hook up the wiring. Hmmm, no power block, and whats this on the breaker? What the dealer had done was to jumper onto the first breaker the power for the Standard Horizon VHF, Garmin GPS, Hummingbird depth finder, and a couple of other items. All of this was somewhat corroded.

Then I looked at the power feed to the console. In the upper picture, you can see the red #10 wire curled up that feeds the panel. That white #16 wire wrapped around the red wire was attached to it. The panel builder was expecting a #10 feed wire, but the boat builder used an under sized cheesy grade white wire to connect to the power to the panel. All of those other white wires you see are also 12VDC positive feed wires. I guess this builder had run out of red wire, and used whatever they had laying around.

In the second picture you can see the white wire coming out of the battery switch. Yep, the same cheesy white wire that feeds the panel. The panel was providing power for the electronics, bilge and baitwell pumps, fish box pump, nav  lights, and everything else. I think the total possible load would be approaching 20 amps, and all of it being carried on the cheesy #16 wire. At 3% voltage drop the wire should have been at least a #10. Funny, that's what the panel builder thought also, because that was the wire size they used.
If I hadn't made the point clearly enough, this was unsafe wiring, and could have resulted in a power failure, or in the worst case possibly a fire.
So in the end, I pulled in a new #10 feed, installed a fuse block for all of the accessories, cleaned up some corrosion issues, and life is now safer, and better for the owner. This was a very bad piece of work by this builder, and it appears they have no quality control, or just don't care, or both..
Posted by Bill Bishop - Parmain at 10:16 AM No comments: