The world is not flat

This should have been an easy job, and it would have been if the guy who designed this helm, had not been a frustrated artist, with a curvaceous fixation. There was an older chart plotter/sounder mounted in the hole, and the task at hand is to mount a Garmin 5212 into the console. But beware, the eye can fool you. 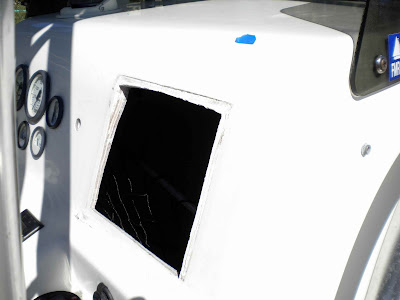 I put a piece of blue tape on the console to show you what you can't easily see in the picture above. The console gently, in a pain in the ass sort of way, curves forward leaving only about 7" of actual flat space to mount anything. This is one of those worst case examples of function follows form. Pretty, sort of, pragmatic no. 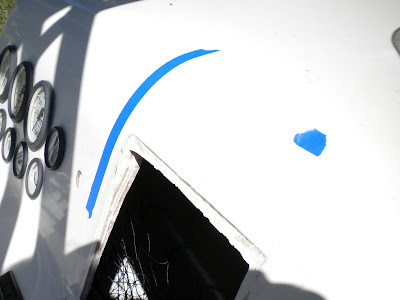 There is always a way, and in this case, the answer is a white acrylic wedge to fill in the inevitable gap that will exist at the top of the chart plotter. I have three words to describe making this wedge. Fiddly, fiddly, fiddly. 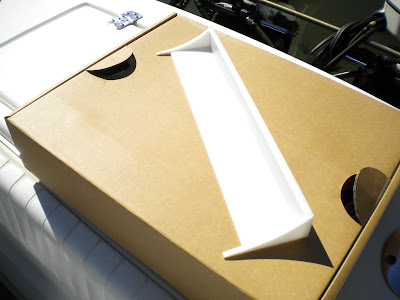 Annoying problem number one is to find a reference for level, and there isn't one, and I will come back to this later. So I started with a straight edge, and marked where the flat surface started at the bottom of the console, and where it ended near the top of the console. It turns out that this is about 7", and I need 9" and change. I took a piece of cardboard, and spiled it to fit the curve. The cardboard, now matching the curve, was taped onto the console, and using a straight edge, the flat console plane was extended upward with a pencil line on the cardboard. Laying the cardboard template onto the chart plotter template allowed me to measure the height of this little wedge fabrication, and to see where the bottom edge of the wedge was going to meet the undersides of the chart plotter. All of this work was just to make the small triangular sides of the wedge you see above. Fiddly was an understatement. 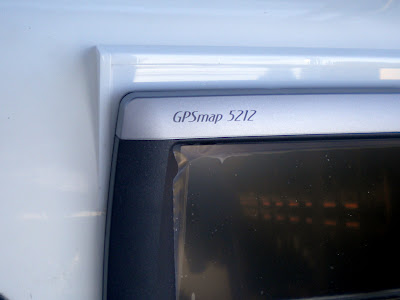 So clutching the template, I go off to Delcraft and spend half an hour drawing little pictures, and explaining to Bob what it had to look like, and a couple days later I have the part in my hands. 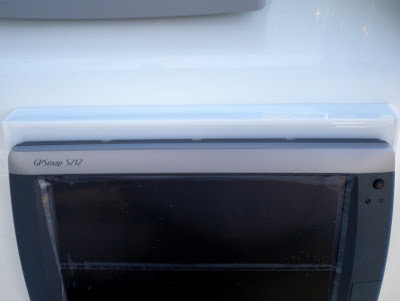 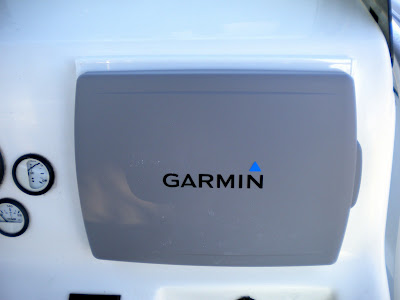 I epoxied the wedge onto the console, taped on the template, told the boat to turn its head and cough, and in a few minutes, the rotozip had done the cutout. This worked out really well, and looked great in the end, but a little bit of foresight on the part of the designer would have made this a short and sweet job. There was enough, just barely enough space behind the console for the unit to fit, which is another thing I would like boat designers to think about.
So what does the installer want the designers to consider? You need flat spaces to mount gear in, so please provide it. Leave plenty of room behind the console, deeper is better. Don't do that Cyclops Syndrome thing, and mount things right smack in the center of the console. There should always be room to mount the primary chart plotter directly in front of the helm operator. Another small gripe I have is with the templates I have to use. I think it would be a good idea to have bold, and straight reference lines both vertically, and horizontally on the templates to give both my eyes, and tape measure the best chance of getting it located correctly, especially when units have curved surfaces. I'm going to keep nagging until I see some real progress here in helm design and layout.
Posted by Bill Bishop - Parmain at 10:58 AM 1 comment: