The installer sits down in a lotus position behind the hull, lights incense, clears his mind of extraneous thoughts, slows his breathing, and enters a trance. He sees the hull sitting in the water, and starts to move it forward at a very slow speed. The flow of the water passing under the hull is smooth, and laminar. 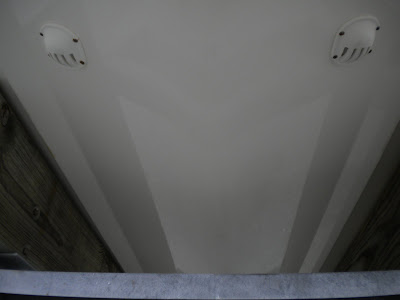 In his minds eye, he picks up the speed. The water flow becomes less laminar, and a turbulent boundary layer starts to develop next to the hull. This boundary layer is caused by friction of the hull as it passes through the water.

As water travels down the hull, it finds its first obstacle, a through hull fitting sticking out from the hull. As the water flows over, and around the fitting, an adverse pressure gradient is formed behind it. As the speed further increases, the water behind the object becomes increasingly turbulent, and is swept aft down the hull. The picture below is a computer model of a fluid passing over a sphere. Note that the flow is laminar at the front of the sphere, but becomes very turbulent at the back side. This is how water behaves as it passes over a hull water inlet, and your transducer doesn't like this. 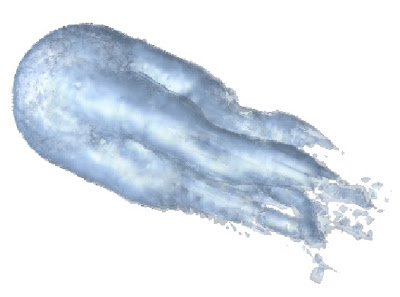 As the installer studies the water flow traveling down the hull he looks for a spot with the smoothest water flow to mount the transducer. It has to be clear of the turbulent flows coming from things sticking out of the hull, and the transducer bottom must be mounted lower than the boundary layer turbulence that is against the hull. 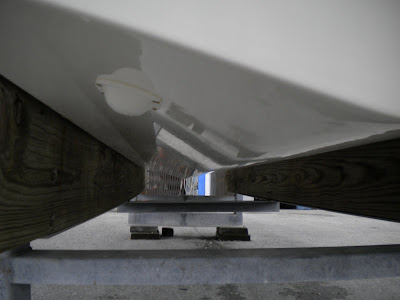 Looking at the port side he spots a large plastic water pick up. That's okay, it would be better if the transducer was on the starboard side anyway. 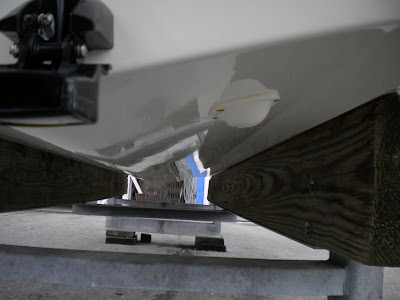 Doh! There is another pick up on the starboard side. The meditative trance abruptly comes to an end. Why couldn't the builder have put both pickups on the port side? There was plenty of room for both, and the water flow would have then been reasonably clean on the starboard side. There is this weird thing about the desire for symmetry, even at the expense of performance, especially in an area you don't normally see. This is a typical example of boat builders not thinking about what kind of equipment will be installed on the boat.

There is actually some art, along with the science involved in placing a transducer on a boat, and you really do have to try to visualize how the water will flow under the hull. The transducer bottom needs to be below the turbulent boundary layer next to the hull, and must be clear of upstream turbulence from inlets and the ilk.

Avoid placing the transducer behind protruding strakes, because they can carry air entrained turbulent water aft to the transom. You also need to make sure that turbulence coming from water flowing around the transducer doesn't cause propeller cavitation, or interfere with the cooling water flow to an outboard motor.

So the basic rule of thumb is to get the bottom of the transducer into the smoothest possible water flow, which translates to getting it as far below the hull as possible. In many cases, it is a Zen thing. The transducer will work okay on this boat, but I would have had an easier time placing it if the starboard side water pick up was on the port side.

Keeping the hull clean is important to transducer operation. The dirtier the hull, ie barnacles, and other icky growths, the more turbulent, and thicker, boundary layer becomes, and it will affect transducer performance at speed.

And a last gentle reminder, at 20 knots, when your depth finder tells you it is too shallow, it is to late. 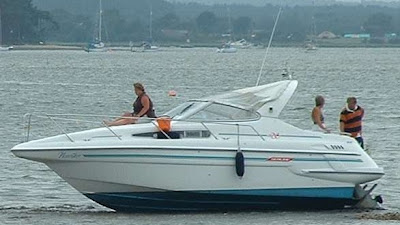 The photo of the computer model is from an article written by Claes Johnson, and Johan Hoffman, and is no longer available online. 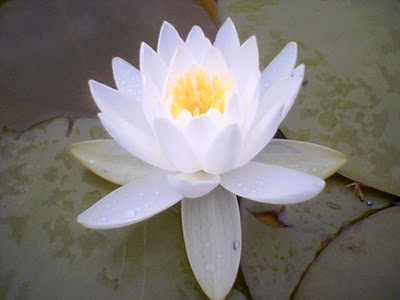