I am an avid fan of National Public Radio. The radio clicks on in the morning at 5:00AM tuned to "Morning Edition" (Kate and I still call it listening to Bob, sorry Steve and Renee, old habits die hard), and in the afternoons I listen to "All Things Considered", and other excellent shows. So milling through traffic one afternoon, I listened to a story on ATC about lock picking competitions that are held all over the world. An obviously excited participant described locks, as "clever mechanical puzzles that were fun to solve". This sounded like fun to me, and I went home to Google what these tools cost, and found out, not very much. About $30.00 dollars will buy a starter kit. I mentioned to Kate what I was going to do, and it elicited a verbally rich dialog that mostly contained phrases like, no, people will think you're a criminal, it's illegal, no, never, what are you thinking?.....
Serendipity is a wonderful thing, and a few weeks later on a Friday evening at my local watering hole (Gecko's in Sarasota), the subject came up again, and this time, all of Kate's friends, Duffy, Julie, Christine, and all of the other women at our large table simultaneously chorused a version of the verbiage I had already heard from Kate, and added some fresh new ones to boot. My friend Jeff leaves the table, and five minutes later he comes back with a lock pick starter kit, and presents it to me. Swearing up and down, that I will only use these tools, and my powers for good, and not evil, Kate relents, and says "okay", but she still eyes them with great suspicion to this day. Thanks Jeff, coolest little tools ever. 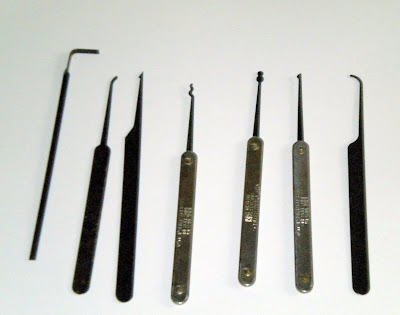 These are remarkably useful little tools. I have used them twice for their intended purpose. I left an owner's boat key in my pocket, which subsequently was washed, dried, and the key ended up in the drier's squirrel cage blower, and that's all I'm going to say about the event, other than it will be there forever. While waiting for the replacement key to arrive, I used these tools to open the boat, and finish the job. I also used the key extractor (third tool from left to right) to remove a broken key from a boat lock, and it worked a treat, on an other boat, I couldn't get it out, I need more of these tools.

Now on to the more eclectic uses for these little tools. The mangled pins you see above are at the bottom of a CF card reader slot, used on many chart plotters for chart data, and saving off user data. I have seen this scenario many times through the years. These pins are tiny, and even if you are careful, any misalignment of the chip while sliding it into its slot, can cause damage. On several occasions, this damage has been caused by an ARI (Alcohol Related Incident), where the owner has enthusiastically, and more aggressively than usual inserted the card. ARI's can, and do cause other problems for boaters, but now is not the time, or place.

I encountered this bent pin problem last week (not an ARI event) on one, of two Northstar 6100I's. The owner had bought $900 worth of platinum chart chips for a trip. The problem was that the software version in the machines would not support the platinum chips, and the system needed upgrading.

Northstar interconnected systems must be at the same software level, and this can only be done with a CF card. So send the unit in and get it fixed, or since it was already broken, and the trip was impending, I tried, and succeeded in straighting the bent pins. First a good magnifying glass and light was needed, and the little lock pick tool set. I mostly used the harpoon shaped key extractor, and the tumbler tensioner (far left). I could slide the the extractor into the card slot, and use the sharp point as a pivot, and then by rotating the barb, you could push the pin back into position. It wasn't easy, but after three hours, I got them straight enough to get the software upgrade chip into the machine, and it worked. To be honest, there was also some luck here, if any of the pins solder connections to the board were broken, I would have been SOL In this case, happy owner, happy software, and a warning to use that card slot, only in an emergency, and be very gentle. 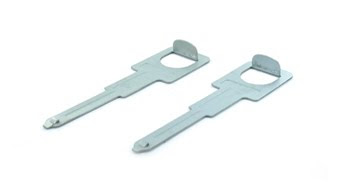 Replacing car style radios is a common event. They all come with with little key like devices that inset into the sides of the case, that release tabs that hold the radio in its mounting cage. Years later, they are not to be found. You can take the flat handles of these tools, and slide them down the sides of the case, and lift up the release tabs. Prior to this, I have used a flat blade screw driver, to wedge it out. When reason fails, force prevails.

So in the end, these are very handy gadgets. They are made of spring steel, are very tough, and about 20 thousands of an inch thick. Cleaning in between solder joints, reaching into some crevice, and a myriad of other applications come to mind. I keep them in my bag all of the time. I mentioned to Kate I was thinking about buying a stethoscope to practice opening safes. It will not sell this time, at all, never, it's illegal, people will think you're a criminal, you're killing me.....  But it might be handy at times. You never know.

Ira Glass, you don't have to call me, I promise I will send a check to my local NPR station, and you should also, or Ira may call you.

The photo is from Bent Card Pins.Com  They are experts in repairing CF card slot bent pins in cameras, and certainty have all of the tools, technology, and expertise to do this well. I was lucky this time. This is best left to experts like them.