Death hides in the bilge

Walking down the long dock to my clients boat, I kept getting whiffs of sewer gas, and I thought to myself, someone's boat needs to see the doctor. I step aboard the clients boat, open the sliding glass door to the main salon, and the stench bowled me over. My first thought was the holding tank had to have exploded, or at least sprung a bad leak. I turned on the air conditioning systems, and suspecting that maybe water had evaporated out of an S-trap, or loop, I flushed the heads, and let some water stand in them, ran sink taps, and showers, and then the odor then seemed to dissipate. I opened the hatch to the engine compartment, climbed in and, checked the holding tank, and the lower portions of the bilge, but the whole area appeared to have less odor than the the main salon initially did. At this point, I had already made several errors, but  I never realized it. I called the owner, and told him about the problem, and the owner contacted the maintenance company. A tech came out, and he had seen this problem before, and recognized the odor as hydrogen sulphide gas. 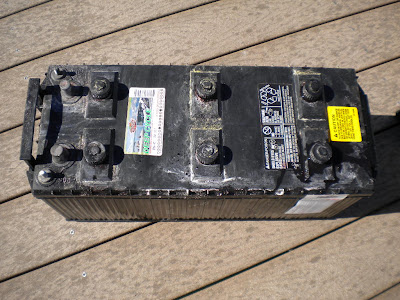 This boat is very well maintained. I take care of the electronics, and another firm does everything else. The boat had been checked a week earlier, and the batteries had been checked for water levels. This is a 24 volt boat, with two banks of four batteries each, and you can see one of the batteries above, with a now swollen case. There is a high quality charger on board, and only the starter battery bank, has a temperature sensor. Somehow, in a very short period of time, four identical batteries in the house battery bank, nearly boiled dry, and the side effects of this, are what this story is all about.
The lead acid batteries used in our boats, are a far cry from the one invented by Gaston Plante in 1859. Like most of us, I know there are lead plates, submerged in an electrolyte (sulphuric acid and water), that undergo some electrochemical reaction to create Mr. Electricity, and that is about where my real understanding stopped, until recently. Batteries have come a long way from Mr. Plante's simple roll of lead separated by linen cloth, and immersed in sulphuric acid. Todays batteries are sophisticated structures, and are made of a complex mixture of metals, and chemicals. 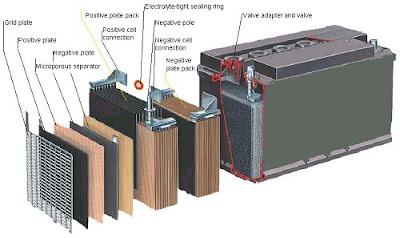 The primary ingredients we are going to learn about, are hydrogen, sulfur, oxygen, and antimony. Your battery, in its normal course of activities, creates both hydrogen, and oxygen while charging, and these are reabsorbed during the discharge cycle. It's when things become abnormal in your battery, that bad things can happen. If the electrolyte (water and sulphuric acid) levels drop in the battery, exposing the plates, sulfates that are now exposed on the lead plates, start to combine with the hydrogen gas created during charging, and hydrogen sulphide gas is created.
Two other gases can form, depending on the construction of the batteries. Lead by itself, is not a very strong material, and is generally alloyed with the element antimony to make the lead stronger. Another item, that can be present, in the lead plate's alloy mixture, is arsenic. So again, if the plates become exposed, the hydrogen gas atoms will also combine with antimony atoms, to make Stibine gas. And if arsenic is present in the alloy mix, Arsine gas can be created. Both of these are even more toxic than hydrogen sulphide gas, and also very flammable.

Hydrogen sulphide gas, sometimes called sewer gas, or rotten egg gas, does occur naturally, and is created by decomposing organic material. It does smell very much like the inside of your holding tank. So while I was running around inside the boat, thinking something was awry with the holding tank system, what I was really smelling, was hydrogen sulphide gas, and this is a dangerous, and toxic material. It is very flammable, heavier than air, and very poisonous. At low concentrations, you can smell it, but at slightly higher concentrations, around 100 ppm, it paralyzes the olfactory nerve, and the odor goes away. So when I went down into the engine compartment, and It didn't seem to have any notable, odor, my smeller had been shut down by the gas. At between 300 to 500 ppm, death is a possibility, and at 1000 ppm death is almost immediate.

I did a lot of digging around, and cases of pleasure boaters who have died from breathing hydrogen sulphide are rare. Less rare are explosions on boats initiated by hydrogen gas/hydrogen sulphide gas coming from batteries. In the end, your boat batteries are both a blessing, and if not properly cared for, a curse.

In this case, I am not sure what happened, other than somehow the four large flooded lead acid batteries, in one of two battery banks, in a very short period of time, had the majority of the electrolyte boiled out of them. This created a very dangerous situation, either from explosion, or breathing the associated gases. New batteries were installed, and everything now appears normal. But the reason the problem occurred in the first case, needs to be found. Charger problem? Installation problem? Alternator problem? Shorted battery?

The typical gas sensors on a boat are not designed to sense these gases, so no warning was available, other than the very strong odor, which goes away with exposure. I have to be honest, I was a more than a little startled about both my specific lack of knowledge, and my potential exposure to the gas.

I will do my best to discover the cause of the problem. It had to have had a source, and I will do a second story soon, when I find out what actually did happen, and learn even more. I will also include some do's, and don'ts when dealing with your batteries, and some thoughts about battery types to use.  I am a lot smarter now, and I hope to get even smarter.

If you have had any personal experiences with hydrogen sulphide gas, and or battery related explosions, I would like to hear about it. You can use the comment, or the email links below. Thank you, Bill

I have a few links below to review.

The diagram of the battery is from the The Association of European Automotive and Industrial Battery Manufacturers website
Posted by Bill Bishop - Parmain at 10:02 AM 10 comments: