Ripped out, ripped off, and other meanderings

Yep it's gone. About the only thing you can say about this install is whoever did it apparently couldn't read, because the directions tell you not to use the sealants they did, and at least two types were used. The second layer was smeared on no doubt to stop the leaks found after the first layer was glopped on with a precision that could only have only been done by a drunk organ grinder's monkey, or maybe just a drunk organ grinder. And I don't even want to know what that disgusting black stuff was in the lower corner. Okay, I won't contest the fact that this is the only place on this boat for a in-hull transducer to be mounted, and that it is damnably difficult to access. So what makes this so irritating, is the previous owner ripped it out before he sold the boat, thus ripping off the new owner. 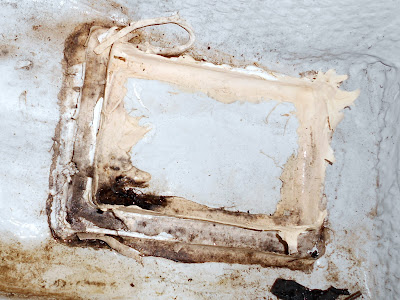