Bob and Carol, and Ted and Alice buy a boat. A short Goofus and Gallant story, with apologies to Highlights magazine 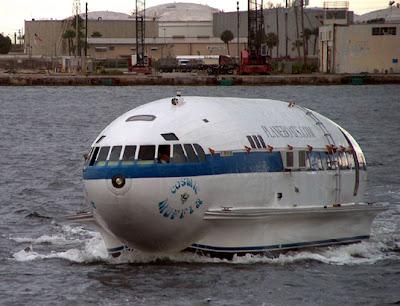 Sometimes I just start a story, without knowing exactly where it is going to take me. More often than not, they end up in my Museum of Shattered Dream's vast collection. We will just have to see what path this one wends down. The vessel above proves that there is the right boat for everyone, out there some place.
Bob sells his company in Tucson, and with his wife Carol, they buy a canal home in Florida. The big truck comes with their stuff, and they get settled in. Sitting out by the pool, with an adult beverage, Bob looks down the canal at all of the neighbors boats. The house across the canal has a Boston Whaler Outrage, the young couple to their left have a long sleek fast colorful powerboat, and the couple to the right have a 52' Searay sedan bridge. Bob stares at his empty dock and thinks, all the neighbors have boats, we should have a boat also, or we won't fit in. So he turns to Carol, and says "we should buy a boat." Carols, says, "but dear, you don't know anything about boats.", to which Bob states, "whats to know, its like driving a car."
On the next canal over, Ted and Alice have just moved in, and are also enjoying an adult beverage out back, and Ted looks down the canal at all of the boats and thinks to himself, a boat might be fun. He mentions this to Alice, who says, "But Ted, you don't know anything about boats." Ted says, "you're right, but why don't we look into it."

The next week Bob and Carol, having decided they are going to buy a boat, start to discuss what kind of boat they want. Bob wants it to be fast and sleek, with lots of colors, and a refrigerator for the adult beverage mixers, and ice. Carol wants one that is big and comfortable, with a bathroom, square bed, leather furniture, and air-conditioning. So with all the important boating criteria having been decided on, off to the boat show they go.
Ted and Alice spend some time talking with friends about boating, and decide to join a local boat rental club. They try many different types of craft to see if they really like boating enough to make an investment, and they also take together several Power Squadron boating courses.

Bob and Carol go to the boat show, and after an hour of extensive research at the boat show, and much to the dealer's delight, they purchase the new 2010 Magnifico 50' cruiser. It has everything they want. A bar, lots of leather furniture, two huge 1000 hp diesel engines, a 40" plasma TV, and just imagine, they can even watch TV on the chartplotter thing while driving. Won't the neighbors be envious.
Ted and Alice are enjoying boating, but are still a little unsure about what they want. They have two small children, and need some room, but they don't want to start with something large right off the bat. They opt to buy a 26' foot cruiser. It has all of the basics to weekend on. They have a decent chartplotter installed, double check that they have good safety gear, and off they go. 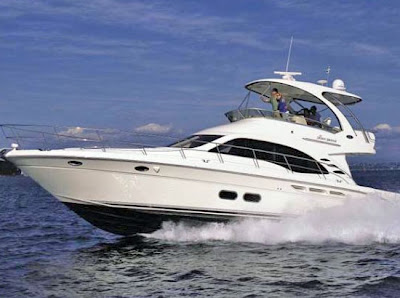 Bob and Carol take delivery of the boat, and the dealer has a captain give them an orientation. There is a big package of manuals for the boat, that Bob stows under the settee, because Carol doesn't want that stuff laying around, and off go Bob and Carol. Bob is a little fuzzy on the concepts involved with the red and green signs that are stuck out in water, and he can't quite figure out that map thingy on the console. Even worse he can't find out how to turn on that nice lady's voice that tells him when, and where to turn. In less than twenty minutes, he is on a sandbar, with props that now look like tulips. Much to his chagrin, the vessel is hauled back to the dealer, and new props are installed complements of his Visa card.
Ted and Alice love boating, and use the little 26 footer at every opportunity. It leaves the dock stuffed with water toys, kids, fishing poles, and provides much pleasure. What was once awkward boat handling, is now graceful and competent. 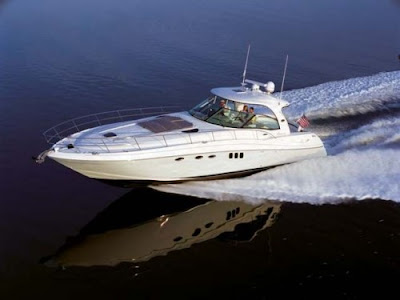 
Bob and Carol still have the boat, and it is now for sale. Bob hires a captain to take them out occasionally on nice days, (Carol gets sea sick easily) and it takes more effort to maintain, than he wants to put into it. They do use the barbecue on board, and the grandchildren love to sleep on it when they are in town.
Ted and Alice used the 26 footer for a year, and traded it in on a 34 footer. The new boat has more room for the kids, their stuff, and the adults. It is used often. They are now thinking of getting something larger, and maybe with sails.
Some of Bill's rules for boaters:

1. The bigger the boat, the less it leaves the dock. If it gets big enough, it will never leave the dock.
2. The more people watching you dock from the marina bar, the worse you will do.
3. Only amateurs have new looking boat shoes.
4. Always have paper charts on board. A blown fifty cent fuse renders all your expensive electronics useless.
5. A place mat from a seafood restaurant is not a chart, ever, and even if it looks like a chart, it's not!
6. At thirty knots, if the depth finder tells you it's to shallow, it's to late
7. If anyone tells you they don't need a chartplotter, because they know these waters like the back of their hand, hang on to something solid.

Tracking the elusive shifting sands of the pass, or Hansel and Gretel go into the woods

A little while back, the angry wrathful sea gods threw a lighting bolt at the Sarasota County fire boat, and wrought severe damage to the electronics, including the Raymarine radar, C-80, and Raystar 125 GPS. Verado electronics, radio's, and many other items were also barbecued well done in the incident. All of the Raymarine's data was lost when it meet the evil half cousin of Ready Kilowatt. The fire boat is a sturdy Boston Whaler on steroids, made by Brunswick's government division, and does not draw a lot of water, making it a good choice for Sarasota's "thin waters".
This bring us to the story of how important "Tracks" on your GPS can be for all boaters. The fire boat had to do a night run recently, to check out a report of flares seen in the Gulf. This was not a pleasant night to be out. The weather was cold, winds were high and the Gulf was unsettled. The boat went made it out of New Pass okay, but the approach back was more difficult, especially at night. They got in safely, but they went over part of the bar with a little more than few feet of water under them. Captain Greg Garrison (left below, Mitch Thorne to the right) decided this would be a good time to do some retraining on the electronics, and especially in using tracks. 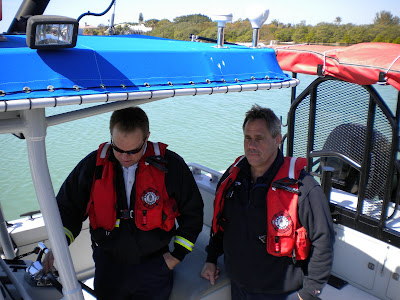 Not to belabor the point, but using, and making "Tracks" with your chartplotter is one of the most valuable things you can learn how to do, and one of the very first things I teach boaters how to do on their nav systems. The passes in our area are poorly marked, rarely maintained, shift constantly, and have eaten many a prop. So having a good safe "Track" through them is very important. The training session on the fire boat this day, was on how to make tracks, save tracks, name tracks, and use tracks. 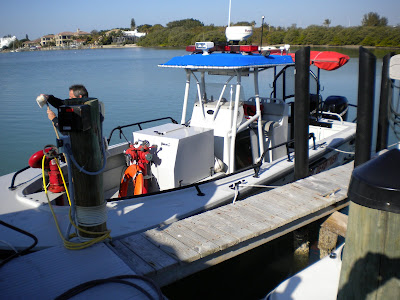 Since we were using the Raymarine C-80, I will use C-80's approach to this, but Garmin's and Furuno's operations are very similar. The general approach to doing a good track through the a pass, is to pick a nice calm day, with good water visibility, preferably at low tide if possible. Always start on the land side, and do this going out the pass. I also like to use a split screen with sounder on one side, and chart on the other. It can be useful to see the bottom depth trending up or down while you do this.
Start in safe water, and on the Raymarine, press "Navigation Options", then "Tracks", and then "Start Track". Don't see "Start Track"?, just press "Stop Track", discard the active track, and then press "Start Track". Now slowly go out the pass using the deepest safe water path you can find. Be careful to give markers, and the ilk as wide of a berth as possible, so it is more difficult to hit them on a dark and stormy night. Make the course out as straight, and clean as possible. I like to go out about a quarter mile out into the Gulf to insure I can safely approach the track from any angle coming in with no obstacles.  You then stop the track, save the track, and name the track. I also make a waypoint near the start of the track to "Goto" to locate the track. 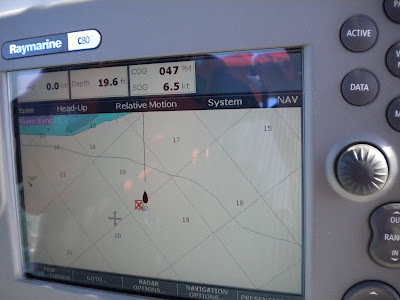 You can see above the waypoint, and the bow of the vessel pointed at the track. Once you have your track nailed down, you have the option to covert it to a route that you autopilot can follow. Remember when I said try to keep the track as straight and clean as possible? When you convert the track to a route, the chartplotter has to take the curvy track you made, and convert it to a bunch of straight line segments that closely fit your track. The more curvaceous your path is, the more waypoints it takes to convert it to a route, so steer small damn your eyes. With Mitch at the helm being ever vigilant, a good track was laid down, and the fire boat has a good path in. Next job kids, is to do the other passes, and save off the info onto a chip, so the angry wrathful sea gods can't get your data again.
Going out to dinner on the boat? Turn "Tracks" on before you leave the dock. If you got to the restaurant without hitting anything, you can follow your track back home in the dark, but remember to check the tides before you leave, at both ends of your trip
Posted by Bill Bishop - Parmain at 8:21 AM No comments: