Somehow over linguistic time, the acronym NMEA has ended up being universally pronounced, such as acronyms can ever be pronounced, as Nee ma. This verbal utterance has become so pervasive, that the marine populous, has actually changed the spelling of the acronym NMEA to NEMA to reflect how we actually say the acronym. If you search "NEMA 0183" -NMEA, Google finds over 24,000 references. I did some snipping off the web of examples, and noted that even the Installer himself has screwed this up at times, and boy I'm not alone. I have purposely not changed it as a personal reminder to myself. 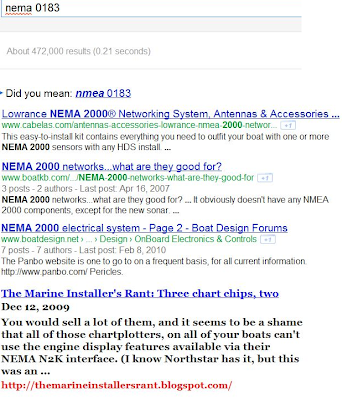 The rate of change from NMEA, to NEMA has been increasing rapidly over time. There are a few references in the eighties, even more in the nineties, and in this decade using NEMA in place of NMEA is almost common place.


So there are are three options available, do nothing, and continue to pronounce NMEA as Knee ma, change the name of the National Marine Electronics Association to the National  Electronics Marine Association, or change the way we pronounce it to "NA Me Ah.  My vote is to be diligent about spelling it correctly, and to continue to pronounce it Knee ma, or Knee maw if you live in the south. Tomato, tomahto, potato, potahto. Nmea, (it is a word, sort of) that is a cool electronics network on your boat bro. 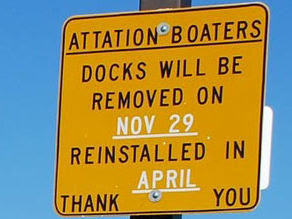 By the way this was all triggered by attending the NMEA conference on Sanibel Island (almost). I am just about done with the piece.

The photo above was taken by Canadian Phil Boisse.
Posted by Bill Bishop - Parmain at 8:58 AM 5 comments: