The postman swings next to owners mailbox, and deposits an onerous looking official document from the Coast Guard. The document is the result of a formal complaint filed by a zealous local bridge tender, that resulted in paper work from the USCG requiring that the vessel become compliant under aspects of CFR's Title 33, Sec 117. Translated this means that there were things on the boat that could be lowered before requesting a bridge opening, but for a variety of reasons we will discuss, they weren't.


This is our starting point, a boat too high. Two 18 foot antennas, and a set of outriggers that were just as tall. 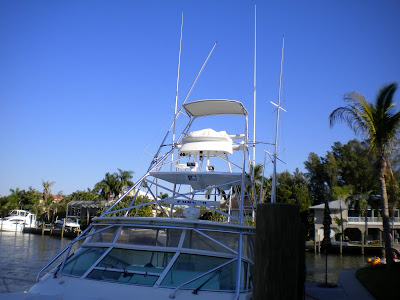 What I suspect the bridge tender was upset about was the outriggers, which could be lowered, theoretically speaking, and I will get back to this later, but were not. The high antennas didn't help much here either. So here is the "Official" language, and I will parce these sentences for you. The important part of the following section is the definition of what an "Appurtenance" is (sounds dirty doesn't it?), and it boils down to anything that is not needed to safely operate the boat, and sticks out someplace from the boat. The outriggers certainly fall into this category.

Sec 117.4 "Appurtenance means an attachment or accessory extending beyond the hull or superstructure that is not an integral part of the vessel and is not needed for a vessel's piloting, propelling, controlling, or collision avoidance capabilities."


I underlined the key words above. The next section says:


Sec 117.11 "No vessel owner or operator shall signal a drawbridge to open if the vertical clearance is sufficient to allow the vessel, after all lowerable nonstructural vessel appurtenances that are not essential to navigation have been lowered to safely pass under the drawbridge in the closed position."


The crux of the owners problem was that although the outriggers could be lowered, it takes two people to do it, and once lowered, there was no way to keep the outriggers from falling out, and away from the sides of the boat. They wouldn't fall into the water, but boy would they stick way out to the sides, making it impossible to pass through the bridge. I'm not an expert in outrigger design, but given the rules about lowerable appurtenances, you would have thought the boat builder would have thought about this?  They do lower, but now what do you with them when they are lowered?


In the real world, this was not a difficult problem to solve, and the solution was simple and elegant. A local machine shop fabricated a nice set of stainless steel brackets that could be mounted on the hardtop, and a trip to West Marine yielded sturdy Velcro webbing straps to secure the lowered outriggers. The inside of the brackets were lined with some additional Velcro to keep the bracket from scratching the aluminum outrigger tubing. 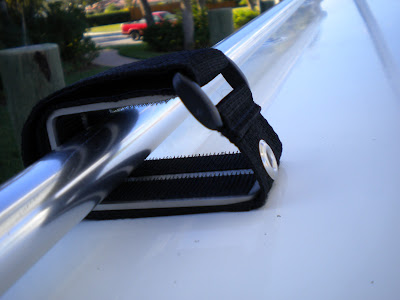 Now on to the antennas. There were several issue involved here. The first question revolves around whether an antenna is really an "appurtenance", and I think the wording in the regs is ambiguous to say the least. I would think that a VHF radio would be "needed for a vessel's piloting, propelling, controlling, or collision avoidance capabilities", if for no other reason then to talk to the bridge tender, and if so, then it is no longer an "appurtenance".


The rebel in me wanted to say it was not an appurtenance, but the fact was that some clever installer had throughly sealed the bottom of the antenna bases with silicone, and used some form of pipe thread sealant, insuring that the water that did get into the antennas, could not escape. The mast was filled with water, and the wiring was shot. The easy answer was to replace the 18' antennas with 8' Shakespeare 5225XT antennas, and pull in new wiring to the radios. 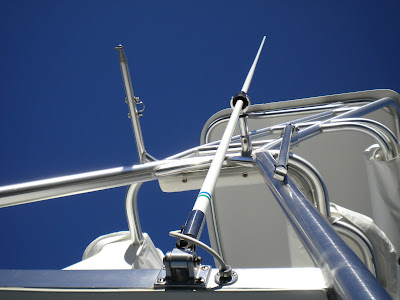 The boat, again theoretically, now adheres to the needed requirements. In the picture below, you can't see it, but there is a small satellite phone dome, which is definitely not an appurtenance, on the upper hardtop, and the VHF antennas are just a few inches higher than the dome. The boat looks okay, but there is a caveat to all of this. 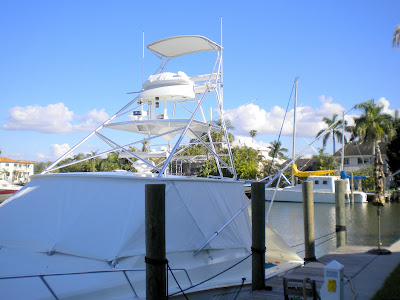 The entire outward loading of the outriggers are now being carried on a 1" aluminum tube being held by a 2" clip. This is fine because the loads are not very large, as long as the boat is not being aggressively rocked, and rolled. But I would not recommend leaving them down in rough seas while traveling at speed.
I don't often get to see O Henry style "Irony" in real action, but in this case it has manifested itself. The bridge tender that filed the complaint works a bridge with a clearance of 21', and as you can see below, the measured height is now 23', so the bridge still has to open. 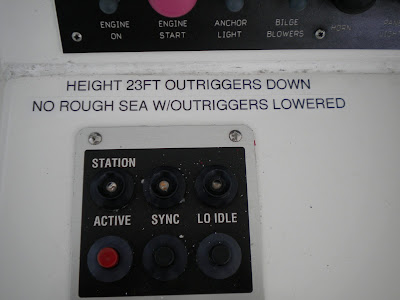 Bridge tenders are nether friends, or foes of boaters. In the overwhelmingly vast majority of cases they are very professional, and helpful, but on occasion you do run into the occasional miscreant, and in researching the issues for this missive, it is not hard to find both good, and bad comments  about them.
The real problem is the direction given to bridge tenders by their employers. Bridge tenders in Sarasota county are provided by a contractor, that is no doubt the low bidder, and local municipalities, often see boaters as an inconvenience. There are a zillion cars, and much fewer boats, and so the emphasis is always on keeping the car drivers happy, and I get it, sort of. On more than a few occasions, I'm stuck waiting for a bridge to open, and close. My solution to this problem is to shut off the truck, and walk over to the side of the bridge to see what boats are coming and going, and the view is always nice. I guess the alternative is to sit in the car, and fume about the how those "sail botes" are making you late for the early bird special.
Bridges are a big deal where I live. If  you take about a 50 mile trip on a sailboat from Tampa Bay, to Charlotte Harbor via the ICW  it involves having ten bridges open for you, and all with disparate schedules. So I will leave you now with the opening times for a local bridge.
The draw of the Hatchett Creek (US–41) bridge, mile 56.9 at Venice, shall open on signal, except that, from 7 a.m. to 4:20 p.m., Monday through Friday except Federal holidays, the draw need open only on the hour, 20 minutes after the hour, and 40 minutes after the hour and except between 4:25 p.m. and 5:25 p.m. when the draw need not open. On Saturdays, Sundays, and Federal holidays from 7:30 a.m. to 6 p.m. the draw need open only on the hour, quarter-hour, half-hour, and three quarter-hour.


Funny how the bridge opening times above, reminds me of a Warner Bros cartoon titled "Fool Coverage." Daffy Duck sells Porky Pig a policy for $1 million coverage. This is only paid out for a black eye as a result of a stampede of wild elephants running through his house between 3:55 and 4 PM on the 4th of July during a hailstorm, and oh yes, also a baby zebra. Needless to say, Porky got his money.


Wikipedia's take on Fool Coverage
Posted by Bill Bishop - Parmain at 11:34 AM No comments: