It's not op art, only a cheesy replica of a radar screen image I get to see on occasion. In reality it's pretty close to what the screen actually looks like. This image has two likely sources. If it's a reasonably clear image the array is not turning, and you're seeing an image from one direction only. If the image is noisy another possible scenario is you have a lot of condensation on the inside of the radar dome. 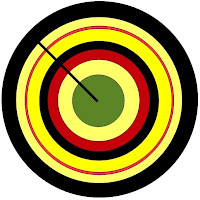 In this case the little domed Furuno array was not turning. Opening the dome and seeing the drive belt disconnected immediately conjured the insight that if the belt was put back in place, the array would turn, and the problem would go away. This proved to be the case, for a few seconds at any rate.

Pretty picture, oops concentric circles again. The dome gets re-opened, and I take a closer look. The belt is off again, and when I looked closely at the little DC motor drive gear, I found it was loose. 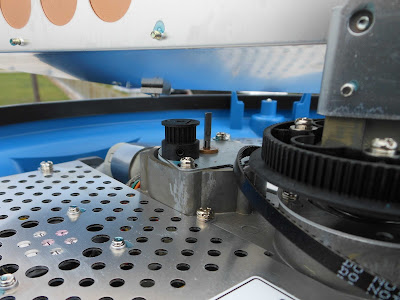