The grand opening of the new West Marine Flagship store a couple weeks ago in Sarasota was quite the production number, and is close as we will have to a real boat show this upcoming year. Their large parking lot was overflowing with boats of all types. This included Boston Whalers, Andros Boatworks, "Panga" style center console fishing boats, Searays, and many others. 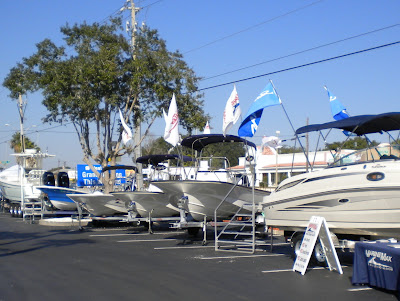 The Team Donzi Yellowfin was impossible to miss, and as you might imagine, it is a poster child for Simrad's full product line. Simrad also had a table top display in the store with sales staff to chat with. 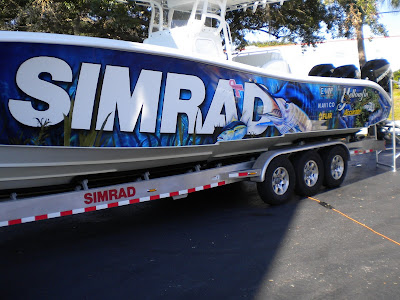 Raymarine, and Mastervolt brought in their mobile showrooms, with a full complement of staff. Garmin, Standard Horizon, and many other electronics, and product vendors had staff present also. 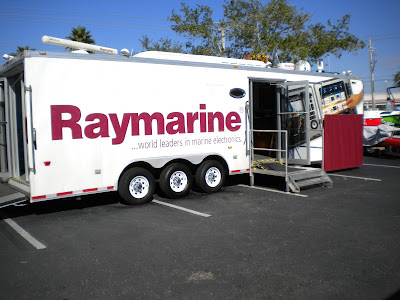 Since I grumble occasionally about fishing boats that never seem to be up to the tasks they are sold to do, I was tickled to see this Andros Boatworks vessel, that had enough rod holders to satisfy even the most demanding fishermen. I started to count them, and gave up after 60. If you put a rod into each one, this boat would look like a sea urchin. 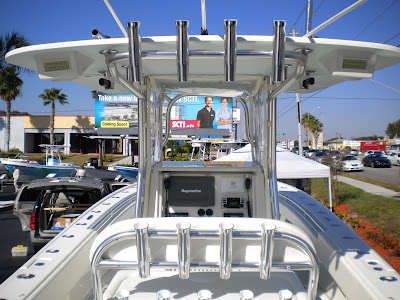 I couldn't resist putting in this picture of the new Power Pole shallow water anchoring system. It's so cyborg, and sci-fi looking. I could imagine adding another degree of freedom to each side, throw in some simple controls, and having it walk you across the flats. I think it's a novel idea. You just can't take the robot perspective out of me. 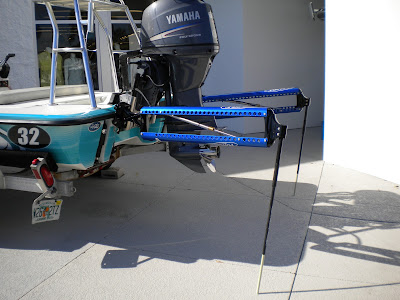 Because I can, I am giving this salty little vessel, a Ranger Tugs R21 the "Best in Show" award. A two foot draft, huge aft cockpit, and enough amenities to spend the night out. I don't think I would want to take this little vessel on a Great Loop trip, but for local excursions, and day trips in SW Florida, its perfect. I would however take their R29 on a Great Loop trip in a heartbeat. Good quality construction, efficient layout, and a diesel engine that just sips fuel. They are built in Kent Washington, and the company has been around since 1958. You can learn more about Ranger Tugs here.  The Sarasota area dealer is Gulf Island Sails. 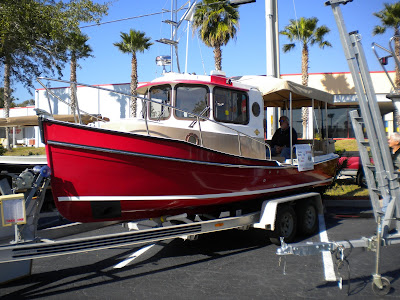 And now to the highlight of the whole grand opening event. West Marine sponsored a "Casting for a Cause" charity benefit, and this was huge fun. Tickets were ten dollars, and included adult beverages, and lots of excellent food. There was live music, silent auctions, raffles, many marine equipment technical representatives, and lots of other activities. The event answered that question that has been pondered by many a sage, and that is "How many people can you fit into a West Marine flagship store?", and the answer is well over a thousand. To be honest, it was a thousand over a three hour period, but the store was seriously packed. 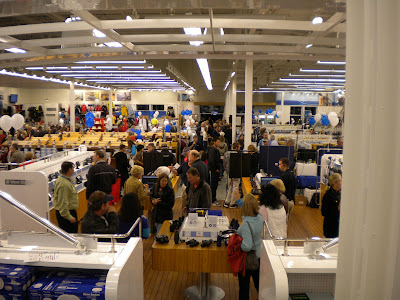 West Marine's CEO Geoff Eisenberg, and Port Supply's Jim Bandy were personally greeting guests at the front door. Geoff is indeed a very gracious, and pleasant person to talk to. You too Jim, but I see you regularly. 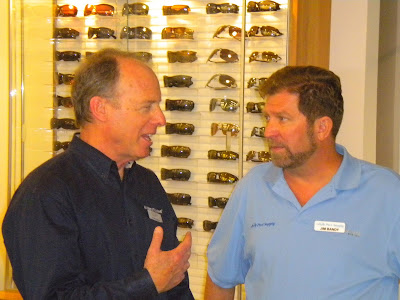 Gecko's Grill and Pub provided the catering, and below are Lia Santos, and Byron Diamond tending to the adult beverages. Gecko's is my favorite local watering hole, and at two blocks from my house, it is geographically very attractive, and has been for over 16 years. 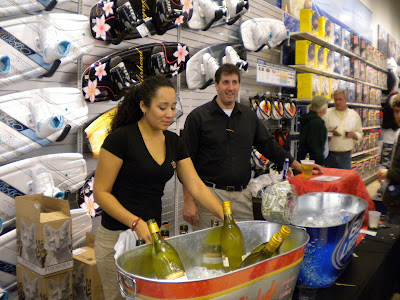 Hors d'oeuvre stations were set up at various locations throughout the store, including a seared tuna carving station, my personal favorite. 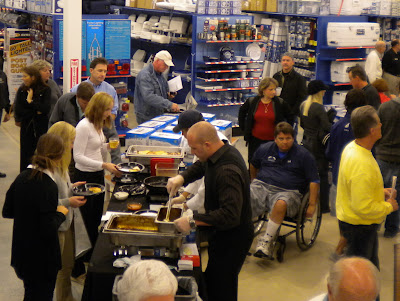 In the picture below, you can see the infamous "Deadliest Installer" in the center. On my left is Travis Lofland, deck hand on the Wizard, and on my right is Edgar Hansen, deck boss, and engineer on the Northwestern. Both of these "Deadliest Catchers" had to stand in a long line to get their picture taken with me, because hundreds of attractive women heard I was there. Ha, I wish. I wouldn't survive one day doing their job on a cold Bering Sea day, but I don't think they would like mine on a stinking hot August day in Florida either. 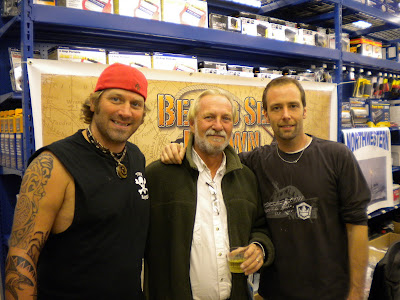 Prior to the grand opening, there was a large store staff meeting, to get everybody pumped up, to meet the grand opening sales goals. As you might expect, some employee wanted to know what he would get if the store made its goal, and then apparently someone else suggested that management should shave their heads, if they made goal. As you can see the goal was made, and fortunately a compromise was negotiated. I have it on good fashion authority, that "Pink" is the new "Black", and any scuffed up, boat shoe wearing marine installer knows this. From left to right are assistant managers Lydia Diaz, and David Plank, followed by district manager Bobby Greenwell, and general manager Wayne Seel, all temporarily pretty in pink. 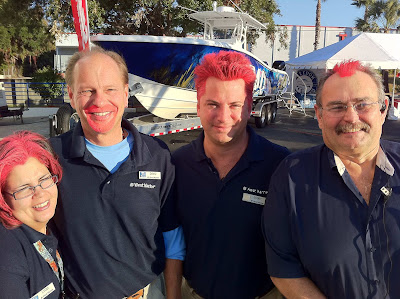 So the store empties, and captain Bob Nichols is seen with a dust mop, cleaning up after all of the reverie is over. I liked the picture. It reminds of the the little guy that used a broom to sweep up after Fractured Fairy Tales was over, on the Bullwinkle and Rocky cartoons. 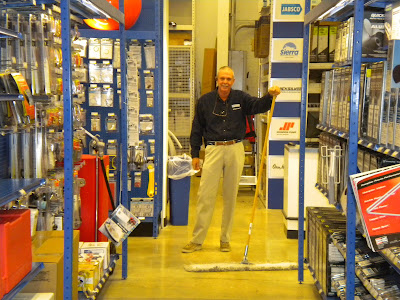 The real purpose of the event was to help our local charities out, and it was a great success. Over $18,000 was raised in the three hour event, and the majority went to supporting youth sailing, and children's needs programs in the community. Nothing is better than having fun while you're helping others.