Jeremy has been with me for many years now. He is the son of a very old friend of mine, and I have memories of Jeremy as a little pink infant in diapers. When a younger Jeremy first started working for me, he had the nickname of "Cabin Boy". The "Cabin Boy" soon morphed into my "Helper", and now he is a good friend, and very skilled professional colleague. 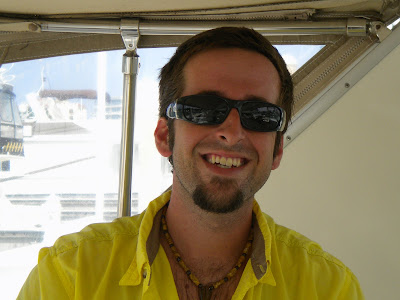 But alas, the marine electronics business is not his first choice of a profession. Although very talented, he does get seasick at the drop of a hat, and does not like the bosun's chair at all. You can see in the picture below the only time that Jeremy "White Knuckles" Johnson was in the dreaded chair, and although he completed the task, he was not a happy camper about the event. 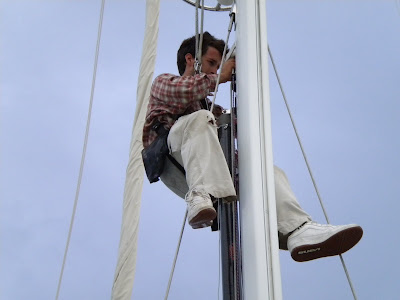 I also can't understand why climbing into a 120 degree boat in the dead of a Florida summer, copiously sweating, while terminating tiny NMEA wires in a dark place only a contortionist would fit into, wouldn't be your job of choice, but in Jeremy's case it wasn't. For the last couple of years, Jeremy has been volunteering at Myakka River State Park, and taking all sorts of specialized courses in controlled burning, and the ilk. Last week Jeremy started his new career as a State of Florida Park Ranger. My loss, is Myakka River State Park's gain. He is a hard worker, very smart, has a tool bag full of specialized equipment. There is little difference between the RV power pedestal, and a marinas power pedestal.

So Jeremy, both Kate and I wish you the best of luck, you will do well, and there is always a 120 degree boat around for you to work in, if you change your mind.

Ranger Johnson's steely eyes survey the 38,000 acres of his new domain, and he issues his first command. "All critters shall now wear Tyvek booties to keep the woods from being tracked up by dirty paws."
Posted by Bill Bishop - Parmain at 11:28 AM No comments:

No worries mate, we are precisely in 176.2 feet of water

The owner of this boat called me and said his depth finder wasn't working correctly on a short "Shake Down" cruise from Sarasota, to Egmont Key and back. This was about a 70 mile trip up and back, and he said the Furuno depth finder acted weird on the whole trip. Since we were in about 10 feet of water, the Furuno RD30's depth of about 176 feet, did seem to be a wee bit on the high side. The Nobeltec sounder right next door does have the correct depth.  Look at the picture closely, and above the depth number on the Nobeltec system, you can see the the wording "200 khz "Cruising." 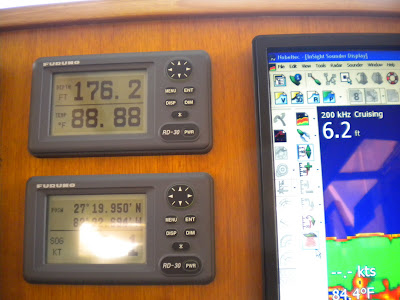 So playing the game of "What's different between these two pictures?", we can now see the Furuno RD30 is  reporting the correct depth, and the Nobeltec sounder is also. The difference is the Nobeltec sounder is now using the "50 khz Cruising" setting. So by now, a lot of boaters have figured what has happened, but for those who need some enlightenment, this is what is going on, in Americanized English. 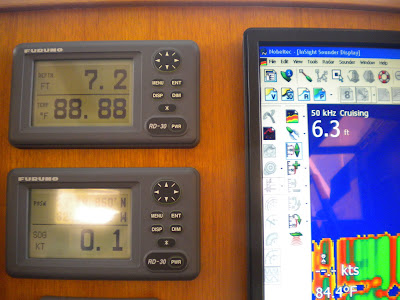 The piezoceramic devices in the two transducers are pinging out sound waves, and listening to the returning sound waves as they echo back from the bottom. They are designed to send out a certain frequency sound wave, and hear that frequency when the sound wave bounces back from the bottom. In this case, since both transducers are using the same frequency, they are hearing each other, and the Furuno unit is getting confused. I suspect, but I'm not dead sure, that the Nobeltec sounder module, has a more powerful transducer (I did not climb into the engine room to verify this, it is what it is), and the lower power Furuno transducer just gets overwhelmed. In other words, the Nobeltec transducer is not adversely affected by the Furuno's transducer, but the Nobeltec's transducer bugs the heck out of the Furuno's transducer, if they are operating at the same frequency. Both transducers are made by Airmar, and I hope I got this dialog generally correct Ms. Robb.
The owner now knows, that if both sounder systems are operating at the same time, they must be set to different frequencies, if you don't want to be in 176.2 feet of water all of the time. There are transducer technologies, that can overcome this issue available, and the link below to Airmar will provide wealth of transducer information.
Airmar's FAQ page will answer about 99.1% of your transducer questions.
Posted by Bill Bishop - Parmain at 10:27 AM No comments: