That fish box is strong enough, most of these guys just use them to keep the beer cold anyway.

Nothing better than a good fish story, especially when the fish is so big, you can't spread your hands wide enough to show people how big it really is. The fish is a Warsaw grouper (hence forth referred to as Gigantor), caught in about 650' of water about 140 miles off the coast of Sarasota, and the best guess is that it exceeds 200 lbs. It took three people just to get it into the boat, and as you can see, it dominates a 6' fish box. I will add the actual weight in the comments box, when I get it later today. 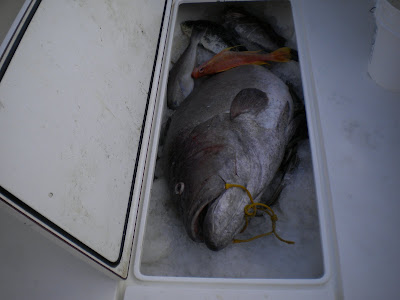 The boat is a popular, and higher end center console fish boat, and in general, is a well constructed vessel. The owner loves to fish, I mean really loves to fish, and he does a lot of tournaments. The boat is crammed full with fishing gear, coolers, lot of extra gas containers, and bean bag chairs for over night expeditions. 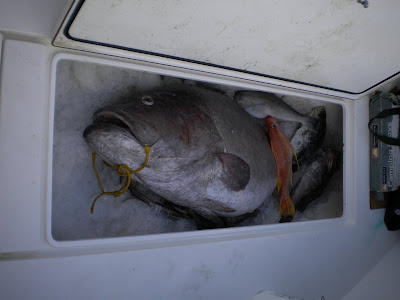 So enough of Gigantor, see that black crack in the picture below, at the edge of the fish box? That is not where the fish box should be. The back of the box has fallen down about three inches, and now water, and or ice can slosh out of the back end of the box into an area, I suspect was not supposed to have water at all. 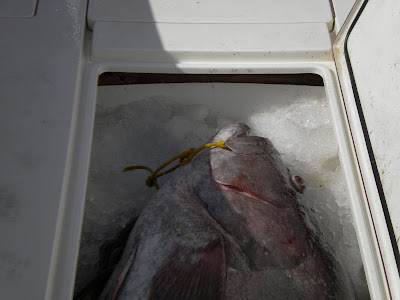 It was hard to tell exactly what had happened, because the box had Gigantor the grouper in it, and numerous spectators were hovering around, but the aft center of the box didn't appear to have anything fastening it. 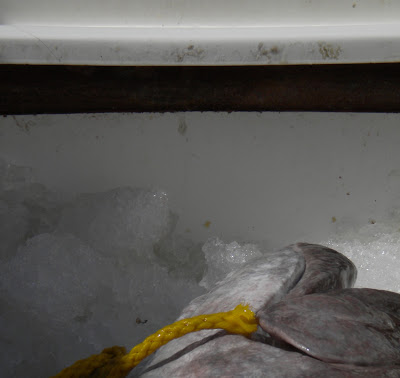 The box seems at first blush, to have been just tabbed with fiberglass in the corners, and under the weight of the fish, and ice, the tabs just failed. The seas were calm, so I ruled out the fact that pounding in 4' seas, with Gigantor in the box could have exacerbated the problem. The attachment was just not adequate, and you can see the torn fiberglass in the corner below. Bad design? Bad manufacturing? I don't know, but this builder can do better than this. The repair will be interesting, because all of the fish box installation was done prior to installation of the deck. I'm sure that this builder will take care of the problem, but it shouldn't have happened in the first place. If you want real fishermen to buy the boat, the fish box has to be able to support real fish. Gigantor has had the last laugh as payback for his untimely demise, and all the beer was kept in real coolers. 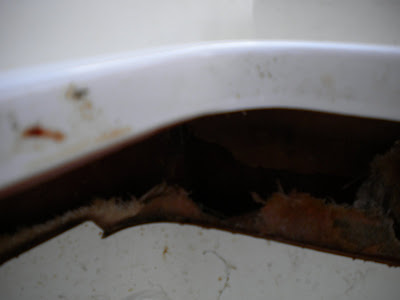 Just as a side note, I will amend this blog tomorrow with a couple additional photos of the grouper on the scales. The final measured weight is 206 lbs. It is worthy of the name "Gigantor", and boy did it produce some fillets.
Jason Boyll, from the fishing team" Get'n After It!" emailed me a picture of Gigantor hanging on the scales in Cortez Fl. It is impressive, and these guys are are fishing monsters. 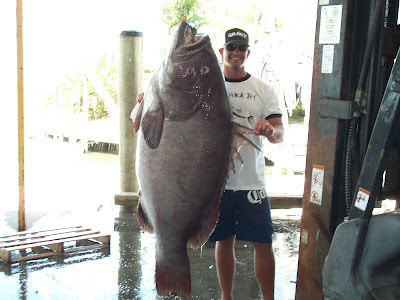 Posted by Bill Bishop - Parmain at 1:02 PM No comments: