These are two intertwined musings about melting electronics, and access to put out a fire. Below is a controller for a marine device, that was installed at the boat builder's plant. It was located inside the console, along with almost everything else on this boat that was electrical in nature. It was installed according to the manufacturers wiring diagram, and instructions, with the correct wire gauges being used, and as far as I could tell, the installation of this little black box was done to all current standards. I strongly suspect, that in a blackish grey sort of way,  that it is no longer operational, since it seems to have caught on fire. 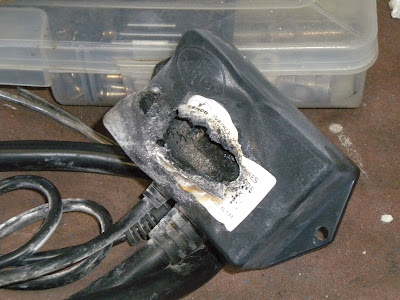 As you can discern below, the wiring harness is fine, and shows no evidence of damage. The box appears to have had some sort of a internal melt down that caused the fire, with out tripping the fuse. It wouldn't be appearing here, if I hadn't seen another slightly different control box from the same company slag down in a like manner. In both cases, it is likely, if they were left unattended, a real fire could have well occurred. 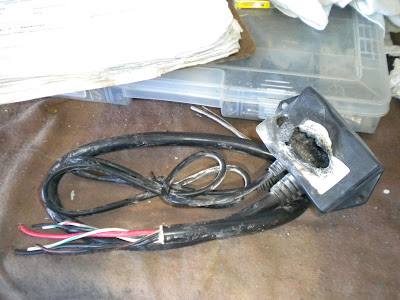 In the case of the box above, the owner, while underway noted black smoke coming out of the console, and knew where his fire extinguisher was. It was fully charged, and its contents were quickly emptied into the console's interior. The smoke stopped, and the boat returned to port. Things were done quickly enough, that, short of cleaning up the mess the fire extinguisher made inside the console, there was no other damage, short of the burnt offerings you see here.
A similar (in function) box I installed, had the same thing happened also, but I was there at the time, and removed it, albeit not gracefully, but quickly from the boat. It didn't look quite bad as the one above, but in few more minutes it would have. I think twice is not the charm, and I am concerned about the amount of power that these boxes control, in such a small package. Maybe stuff happens, or maybe there should be some design improvements to make things more robust. I also found some additional comments online about this issue.
Although the story ends well, and nobody had their eye shot out, it led me to musing about access to console interiors, and asking myself the question, "Have I seen boats where access to the console interiors is difficult?" The answer is yes, many times. A fire can occur in many places on a boat, but an electrical fire is statistically  more likely to happen in a place where most of the wiring is, and on many boats, the consoles are one of those areas.
In the case of this boat, there were several ways to get quick access, and a front access hatch was used. But I have been on many boats, where if a fire occurred in the console, it would take time and tools to get to a point where you could use a fire extinguisher to put out a fire, and maybe, by then it would be late.

I was in my local West Marine store, and I told my friend Wayne Seel (Store 63 Manager) about this story I was assembling, and I asked him if I could look at the Beckson-esque deck plates to get some ideas for console access for a fire extinguisher. Wayne got all excited, and said "follow me", I have exactly what you need. Down the aisle we went, and "Lo and Behold" he produced this thing called a Fire Port, made by Marine East. What a nifty gadget this is. A quick hole saw cut, and you have instant access for a fire extinguisher anywhere. It's about 3" in diameter, and is reasonably resistant to water access, and inexpensive. The clear window allows you to see into the area, before you do anything abruptly, and it won't let a lot of oxygen into the area when you push the fire extinguisher nozzle through the port. What a great idea, thanks Wayne, you know your inventory, and you can teach this old dog something.

So the next time you go on board your boat, think about this little story, and see if you could put out a fire inside the console, or other locations. Then find your fire extinguisher (I think it  is under the console cover inside the head, or maybe I put it under the seat somewhere), and make sure its  little needle points to the happy green color. Remember that Darwin always culls the weak and infirm from the herd.
Posted by Bill Bishop - Parmain at 11:21 AM No comments: