My sonar is chirping, what up?

This is my modest attempt to illuminate the readers about the recent advent of "chirp" fish finder systems in the marine market place. This is impressive technology, and if you really want to find fish, this emerging technology can do it for you. So lets start this off with the basic math involved in understanding "Chirps" and in particular, the linear chirps that are being used.
In a linear chirp, the  instantaneous frequency   f(t ) varies linearly with time:

where f0 is the starting frequency (at time t = 0), and k is the rate of frequency increase or chirp rate. The corresponding time-domain function for a sinusoidal linear chirp is:

So with this in mind, we can now move on to intelligently discuss the DSP (digital signal processing) and some of the techniques involved including Fourier transforms, and I'm suddenly not feeling very well. I'm afraid. Dave, my mind is going. I can feel it. My instructor was Mr. Langley, and he taught me to sing a song. If you'd like to hear it I can sing it for you. Daisy, Daisy....
At this point I am going to dumb this exercise way down to a level that I hope most will understand, and that certainly includes me. So begin by clicking here, and playing this active sonar ping, and then come back. Good to see you back. What you heard was a representation of the type of sound, or pinging (also called a tone burst) your depth sounder's transducer makes. Now click chirp, (you might have to download it first) and pop on back. Instead of a single frequency being pinged, the chirp sweeps across a band of frequencies. The chirp transducer might send out a chirp that starts at 130 kHz, and ends at 210 kHz. The picture below is a graphical representation of what a chirp looks like starting with a low frequency and chirping up to a higher frequency. The starting frequency, and the ending frequency define the bandwidth of the chirp, and hence the term "Broadband" sonar. 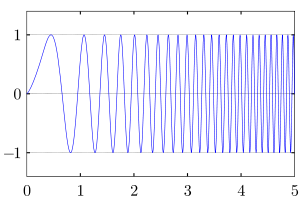 So what's the big deal here? Your current transducer, and sonar works well, but it has some limitations caused by those so called laws of physics, and they are difficult to overcome. Even congress can't change them, but keep an eye on them, they might try. The shorter in time your ping is, the better the target resolution, but the less distance it can travel through the water. The longer in time the ping is, the further it travels, but you end up with less target resolution. So in the end, physics always win, and you get a compromise between power needed, ping duration, resolution, and yes cost.
"Chirping" has been around since the fifties, and an early application of this technology was for radar systems, which have the same kinds of issues a sonar system has. Chirp sonar systems have also been around for a while, but due to the cost of the technology (much less expensive now), it has mostly been available only to research organizations.

When you emit a long chirp, it has a very clear acoustic signature, unlike its cousin the single ping. The return echo can then be matched, and compared to the originally sent chirp signal. This allows for more precise target discrimination, and since the sweep is over a greater range of frequencies, targets that might not be seen well at one frequency, may be seen by another frequency in the chirp. Since the chirp has a long duration, it penetrates further (deeper) with less power required (the loophole in those pesky physics laws). These systems can potentially chirp simultaneously on both low, and high frequencies, to provide even greater detail and information when processed.

This is not simple technology, and it takes some serious, and dedicated computer processing to achieve. It also requires a special transducer to do this, so don't go thinking you can use your existing transducer. In addition there is a correlation between the power of the transducer, and its performance, especially in deeper waters. The good news is that the resolution improvement is four to five times or more better than current technology. This is a software and hardware solution, and given some time, I would expect these systems to get even better, and less expensive. There are also scenarios where these systems can identify specific fish species.

So pay attention to this stuff. Simrad introduced the first pleasure/fishing boat chirp sonar covered by Panbo, and I suspect at the upcoming Miami boat show, Garmin, Raymarine, and the other manufacturers, will be showing off this technology. If they are not quite there yet, they will be hot on Simrad's heels. I would also expect that although somewhat pricey now, as this technology is adopted, the prices will drop. Check in with Panbo.com to see what Ben finds out about this emerging technology during, and after the Miami boat show.

Many thanks to Simrad Yachting, Airmar, and the others for letting me pester them while trying to understand how all of this works, I'm smarter now, but my brain is still reeling. This was an odious little task, and it's time for a bourbon now.


The active sonar ping is from the Free sound project
The Chirp, its graphical image, and the equations are from Wikimedia.org/
I did crib a couple of lines from 2001, a Space Odyssey


and.... If I made any bad technological errors, let me know. Bill