It seemed like such a good idea at the time. 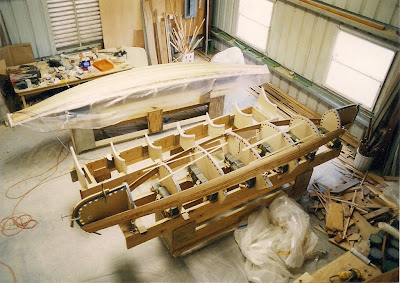 A friend of mine, Mark, got a "Stripper" canoe kit as a gift one year from his wife Cathy. The kit consisted of a pile of bead and cove strips, precut rails, a few assorted pieces of wood, and about 10 pages of instructions. He was clueless about how to actually build it, and asked me for some help. I carved out some space in a building that my dad was using to build a 35' John Marples Searrunner trimaran. My dad never wanted to use the boats that he built, and rarely did. He was a civil engineer, and just loved the intellectual exercise involved in building boats.
I had never built a Stripper craft, so as I reviewed the plans, I noticed the instructions said you were to use small brads to nail each strip to the frames to hold them in place, and when the hull was done, you pulled the nails out, and filled the holes with toothpicks. I thought this was a stupid way to do this, and you would end up with a hull that would have hundreds of obviously filled holes in it.

So when I lofted, and built the construction frames for the hull, I drilled holes along the edges, and used small C-clamps to hold the strips in place instead of nails. The first few strips were glued in place, but it was hard to get a good fit in between the strips where there was no frame to secure it to, so I  milled small U shaped pieces of wood. These pieces of wood would fit on top of a strip, and had a string attached to it, with a brick at the other end. This weighted down the strips while the glue was drying. Construction moved at the blistering pace of about 8 strips per day.
Now, I don't want you to think at this point that I was actually building this little vessel. I lofted the frames, gave instructions on how to do it, and my friend Mark would come in and actually do the work, while I studied the problems encountered, and his progress. So along the way, I had a slowly dawning epiphany that there might be a better way to build this type of boat. The things that I didn't like about the construction technique were the problems in getting a good fit in between the strips, and when the hull was done, you had a polygonal (lots of flat surfaces) structure that had to be hand faired into a curvaceous shape. Although this wasn't hard to do on the outside of the hull, it did expose any gaps in the the glue, and these gaps had to be filled, and again sanded, and sometimes you had to remove a lot of hull material to get a good shape to the hull. On the inside of the hull, there was little you could do with the polygonal shape, except sand off the excess glue, and the pace of construction was glacial
After thinking about this for a while, I tried a little experiment. The canoes strips were a 1/4" of an inch thick by 3/4" wide. I took a plank of western red cedar, and cut a bunch of strips that were 1/8" thick by 3/4" wide. I made a small curved mold, and attached a bunch of screws around the edges. I took the strips, taped together into a small sheet and laid them out on the mold, and used string to lash them into place. I put a piece of four ounce fiber glass, on top of the strips, rolled on epoxy, and then lashed a second layer of strips on top. I covered the layers with plastic, hooked up a vacuum pump, and went away for a few hours.

After the epoxy cured, I came back to look at what had happened. The two layers of western red cedar had shaped themselves to the shape of the mold. The surface was fair inside, and outside. I then epoxied four ounce glass on the inside, and outside. The result was outstanding. Strong, tightly fitting planks, good looking, and the exact shape of the mold. "Strip Molding" was born. You can learn more about Strip Molding, at the link to the right, titled "Strip Molding 101". This is a scanned article from Boatbuilder magazine, I wrote in 2000. 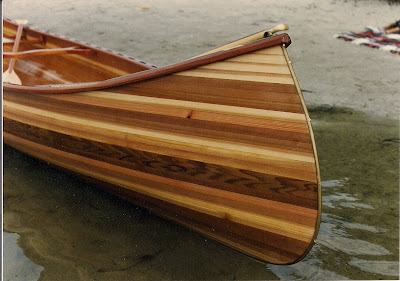 In a great burst of enthusiasm, I decided to embark on an adventure in boat building, and started to build canoes, because you only needed one mold to make a symmetrical, mirror image vessel. I studied the materials carefully. Aerospace grade epoxies, clear acrylic aliphatic urethanes with UV inhibitors, cast bronze fittings, western red cedar, and Honduran mahoganies were all the materials of choice. The results were stunning. No fasteners, perfect hulls, beautiful woods, strong, light, and with clear, sun resistant coatings that would last for many years without maintenance. 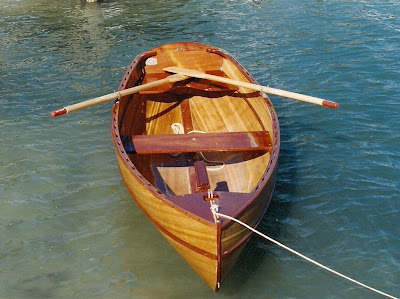 I built molds for John Marples' Gull and Daffy dingies, with sail kit options, and I then went back and started to play with canoe options. One of the first things I added, was a trolling motor option. A removable oak bracket could be attached, and a Minn Kota electric motor could be attached. 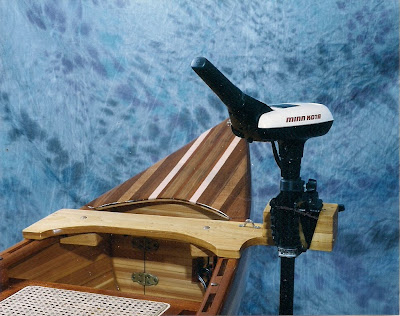 To power it, wiring for batteries was embedded under the keel strip connecting the fore and aft compartments, and compact AGM batteries could be placed the the fore and aft compartment. A trolling motor outlet was installed, along with a 12VDC outlet, used for charging, and other needs. The little vessel had a range of about 12 miles, at about 4kts. If you slowed down, the range increased. 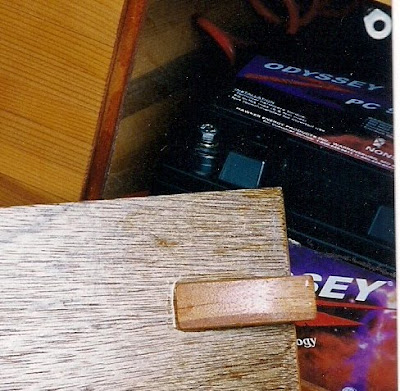 You gotta have drink holders for the adult, or otherwise beverages. 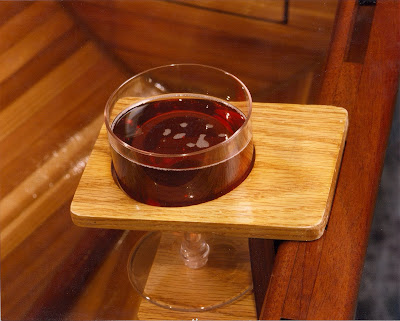 Since you have 12 volt power, you can have Orff's Carmina Burana blasting out of the speakers while underway. It still sends shivers down my spine. 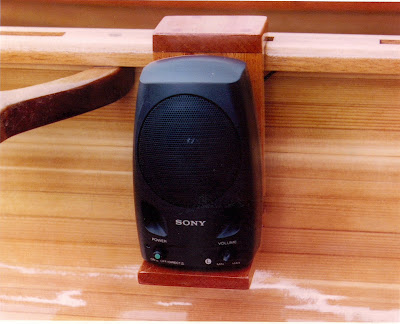 As long as you have batteries, you might as well charge then while underway, and a mahogany framed solar panel was added. The panel was not adversely affected by shadowing, and had a clear plastic coating, so it could double as a table, and the caned seat backs were made reversible 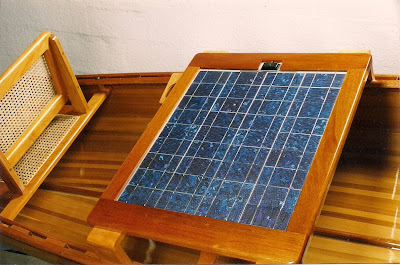 So out of these improvements, came the "Piece d Resistance" the Solar Electric canoe. With the solar panel, the range increased to about 15 miles on a sunny day. I took one on a three day camping trip, 26 miles down the Peace river, and never once touched a paddle, although I had them. The solar panel was able to shove enough extra charge into the system, over the three days to give me power to spare for the trip. 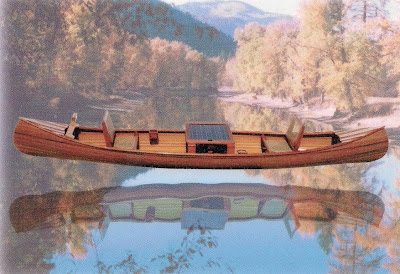 All of these boats were beautiful, and cost competitive. The solar electric canoe sold for $5500. As a comparison a new wood Old Towne canoe with a clear finish now sells for $7800. But for love or money, I couldn't sell enough to make a profit. I did boats as furniture, spent thousands on brochures, advertising in the New Yorker, and Wooden Boat magazines, and did boats shows, but to no avail. I sold a lot, but never quite enough to make a profit. In the end, I did find a outlet selling them in high end art shows, but the life of a nomad with a big truck full of boats was not what I desired. After three years of trying to make it profitable, I again had a slowly dawning epiphany. People buy expensive high technology boats, and keep them outside in a highly corrosive salt water environment, and by waiting for a few weeks, something will break, and the owner will call you to get it fixed.

So I shut down, the boat building business, and started to repair boats, and install marine electronics, and I instantly started to make money. Okay, so why couldn't sales and marketing genius boy make a buck with such a cool product? I have had a long time to think about this. The first is geography. Southern Florida, is not exactly a hot bed of small wooden boat enthusiasts. I think, had I been doing this in the right northeast location, the reception would have been better. The second reason is you had to see, and touch the boats, to buy them. Despite all of the advertising, only a few boats were sold from it, and the third reason was they looked so good, people were afraid to use them, and I know for a fact, that most of them are hanging in the summer house as an "object d art".

It seemed like such a good idea at the time.
Posted by Bill Bishop - Parmain at 8:46 AM 2 comments: