The installer's steely blue eyes stare steadily forward over the endless rolling seas. His weathered finger touches a spot on the display, and he commands the helmsman to "bring her about to 091 degrees, and steer small damn your eyes". The installer engages the autopilot, and tells the helmsman to take her to 20mph, and hold for a moment. Now take her to 30, now 40, now 50, now 60, and hold her there. A small smile of satisfaction briefly flashes over the installer lips, as the sleek vessel surges through the 3ft seas at break neck speeds. He is still alive. 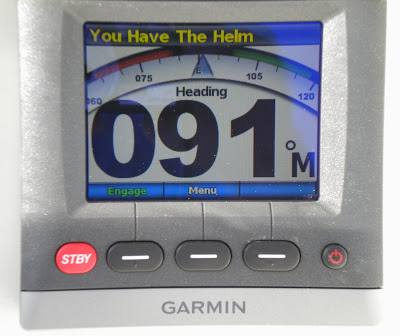 To say, I was impassive during this exercise, would not be quite the truth. Although I wasn't exactly screaming on the inside, I have to admit to some degree of trepidation as we approached 60mph in 3ft seas with a 10 mph head wind. I have installed many autopilots throughout the years, and have never been moving so quickly under autopilot control. I have also seen some erratic behavior from autopilot systems that were not properly set up, or had other issues. A sudden veer, at these speeds, could cause precipitous events to occur. By the end of the day, the autopilot had run the boat out, and back for a total of about 120 miles, and for a brief period the boat had reached 65+ mph and the average speed was 60mph. The limiting factor here was the sea conditions. I reminded the owner, that the autopilot can't steer the boat when it is out of the water. Had the seas been a bit calmer, I am confident that the pilot would have worked well at the boats max speed of about 75mph. I also know of a boat with this pilot, that ran at 83 mph. Amazing technology, to say the least. 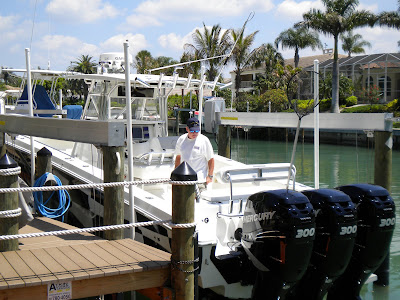 The GHP 10 is an outstanding autopilot for this boat. One of the things that gave me the confidence to travel at these speeds, is the fact that the autopilot is monitoring engine rpm's in real time. The rpm's feedback to the pilot, controls the amount of motion allowed by the pilot, and a sudden loss of rpm's by an engine will cause the pilot to immediately disengage, and trip alarms. The other nice feature of this pilot, is the shadow drive. You see a crab trap float ahead, you take the helm, and steer around it. The shadow drive, senses you have taken command, and disengages the autopilot. You let go of the helm, and the pilot re-engages. The Garmin GHP 10 autopilot is the son of the Nautamatic TR-1 which was purchased by Garmin. Hah, I knew it was the first pilot approved for use on the Verado engines, I installed many of them. 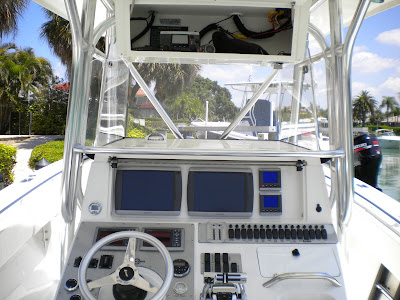 The down side of traveling at these speeds, is the relative wind speed. For someone standing in the boat, it's like being in a hurricane. I was standing to the side of the console, and was being buffeted by 65mph to 75mph winds. The winds were literally trying to rip my clothes off and forget wearing a hat, or sunglasses. The bouncing at those speeds required a "White Knuckled" grip on some solid stationary object. It was definitely one of those "Mr Toads Wild Rides." The good news was that in an hour, we had arrived at a destination that would have taken most boats a couple of hours or more to get there. 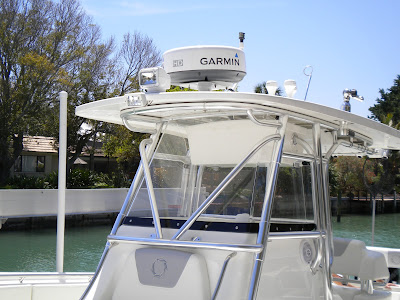 Taking a segue now the reason for this trip was the owner learned that I had never been fishing. That's not really true, because I fish at Publix all the time. For most all of my life, I have lived near the water, with the exception of about 6 years when I lived in Minneapolis (Does the Mississippi count?). Although I have boated for as long as I can remember, I have never gone fishing, and my friends will tell you I often say "I can't afford $50.00 a pound Grouper". There is some truth to this statement, as many fisherman realize when they refill their fuel tanks at the end of a trip 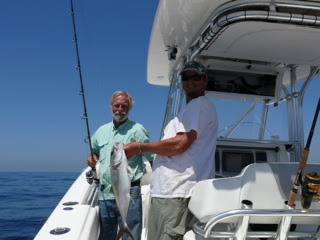 So in the picture above, is your wind burnt, and disheveled writer in the green shirt, proudly displaying the very first fish he ever caught. It was an Amber Jack, which I caught with some excellent tutelage from charter captain extraordinaire Brian Martel from Sarasota Fl. I have learned that when most boaters tell me, "They know these waters like the back of their hand", I better hang on tight to something sturdy. In Brian's case he really does know the waters like the back of his hand, and if you want to catch fish, this captain knows where they all are. Brian's e-mail address is (midniteson56@aol.com), if you are in the Sarasota area, this is one of the very best captains here.

The Garmin GDS 22 sounder module can see a metaphorical quarter on the bottom, and you could clearly see the Amberjack in a column, bait on the bottom, and much larger fish on the 5212 display. On the very same day, Ben Ellison (Panbo.com) was on a similarly equipped boat in the Gulf, and he has a screen shot of the Garmin GSD 22 sounder info displayed on a Garmin touch screen MDF. This will give you an idea of how well this fish finder works. I caught a 4lb Red Snapper, but go check out the "Bad Ass Snapper" Ben caught, and the Garmin sounder screen shots. Follow the link here to read Ben's piece about Garmin gear, and fishing.
http://www.panbo.com/archives/2010/04/garmin_visit_3_wfo.html#more 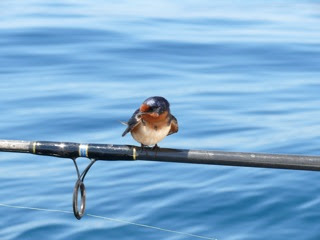 After catching about a dozen Amberjacks, and one Red Snapper, I needed a break. Apparently this little guy, who was sixty miles from land needed a break also, and hung out on my rod for a while.
Posted by Bill Bishop - Parmain at 8:27 AM 2 comments: