Death revealed in the bilge

Sherlock Holmes said, "When you have eliminated the impossible, what ever remains, however improbable, must be the truth." This is part II of Death hides in the bilge, and we will apply Mr. Holmes' logic to this discussion.
Let's start with a base line. These four batteries, are arranged as two pairs of 12 volt batteries wired together in series, then the two pairs are wired in parallel together to make one 24 volt bank. The 24 volt positive input from the charging systems goes to one pair, and the ground is on the other pair. It is wired as it should be. 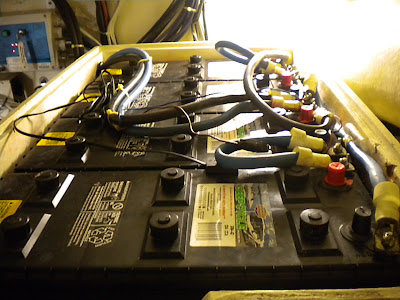 The batteries were about two years old, and are used as the house bank. There is another identical battery bank that is used for engine starting. 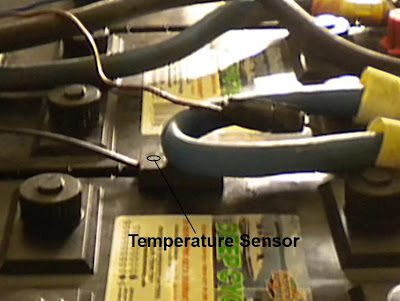 This is what we know. The batteries had been checked a week earlier, and were full of water. The batteries boiled out, creating a lot of hydrogen sulfide gas, and had become toasted into oblivion when they were looked at a week later. The batteries were replaced, and the cores were disposed of before any forensic analysis could occur. Four new batteries were installed, and the system is now operating normally. The charger voltage output to the batteries is as expected, and the temperature sensor is operating correctly. So the trick here is to try to develop a scenario in which this could have happened.

In general, the way battery chargers work, is they measure the voltage of the battery in between charge pulses, and adjust their output voltage accordingly. The lower the voltage in the battery, the harder (more voltage) the charger works to charge it. If the battery is fully charged, the charger just puts a little bit of current into it to maintain the charge. The actual technique is more sophisticated, but this is basically what is going on. Your alternator is doing the same thing. Now for the geeky stuff. The average 12 volt battery is made up of 6 cells, each of which generates 2.1 volts. These are connected in series in the battery case. So 6 times 2.1 volts equals 12.6 volts, and voila, you now know how your boat battery is put together.

Okay, lets take a scenario where one of the cells gets shorted. The battery will still work, but now instead of having six operating cells, it now has five, and the fully charged battery voltage is now 10.4 volts. To the charger, it now looks like it needs serious charging, and it cranks up the current. The reality is that the battery is at full charge, and pumping in extra current, when it is not needed causes the battery to heat up. The extra heat starts to evaporate the water at a faster rate, and the plates in the battery get exposed. When the plates get exposed, the hydrogen gas combines with the sulphates on the plates, and bad gases are made. By the way, these gases are why you see that white or blue stuff growing on your battery terminals, and a sign that something is going awry.

So what's the safety back up? The answer is the temperature sensor. In this case, if the temperature sensor reached 140 degrees, the charger should have shut off, and it eventually did, but it took a while for this to happen. There could be several reasons for this. If the sensor was not making good contact with the surface of the battery, it wouldn't provide an accurate reading, meaning the reading would be lower than the battery's real temperature. I have seen these sensors pushed into blobs of silicone goo, and the goo insulates the sensor from the battery if you use too much. The other thing that could have happened, is the sensor was not attached to the battery that actually shorted in the bank. It could have taken some time for the non-shorted batteries, to finally get hot enough to trigger the sensor. In the end, extended overcharging of batteries creates heat that boils the water away, causes a battery's early demise, and creates explosive gases.

So in the end, the problem was caused by a shorted battery, in the engine room, with a poorly attached temperature sensor, or one that was not on the shorted battery, or both. Colonel Mustard gets off the hook, this time. When you look again, at the second picture, the temperature sensor is now straddling, and glued to two of the batteries in the bank, and is additionally pined down in place by a battery jumper cable. This insures good contact, and now two of the four batteries are being measured.

I have to admit that this was an unusual, but not that unusual of an event. Batteries can be dangerous if not properly cared for, and even if you do, sometimes bad things can still just happen.  So here is some advice from the Installer:

I think AGM (Absorbed Glass Mat) batteries are better options for a boat than the lead acid versions. They are much less prone to out gassing, and cell shorting. Both can happen, but but it is much less likely. They also do not require water, so if your batteries are in a location where it is hard to fill them, human nature says they won't get checked, or filled as often.

If you smell "Rotten Egg" gas, leave the boat immediately if you can, and turn off the engines if they are running. Shut off the battery charger, by throwing the shore power breakers, and allow plenty of time for the gas to dissipate. Remember the rotten egg smelling gas is very explosive, and very poisonous.

Allow gas to dissipate before re-boarding. Turn off all DC/AC power breakers, and battery switches prior to dealing with the batteries to reduce ignition risk.

When changing out damaged batteries, wear safety glasses, and take off that long gold chain with the Atocha coin, and any jewelry that could cause a short.

I view lead acid batteries with some suspicion after two years on a boat. I know they can last much longer, if properly used, and charged, but I would load test them at two years old or so, to see how they are doing, and then yearly after that.

And I just want to mention, showing an abundance of caution, that on the vast majority of boats, it is a bad idea to run the battery charger via the generator, and engines at the same time. Each charging system can fool each other, and unpredictable things can, and will most likely happen.

Batteries are heavy, powerful, full of dangerous chemicals, and require sobriety, and respect when you deal with them.

Some humorous thoughts about batteries, and chargers from "Bruce the Surly"
Posted by Bill Bishop - Parmain at 11:32 AM 5 comments: