The droning, the incessant buzzing. It never stops. Day in, and day out it's alway there, burrowing through my ears, and into my head It's driving me crazy. Oh please, I beg you, make it stop. My fevered brain searches for a solution. Wait a second, gasoline, and lots of it, I'll burn them out, no, no, dynamite, that will do the trick, uh yes Kate? I didn't hear you. No, I haven't called the beekeeper, but I will do it right now. 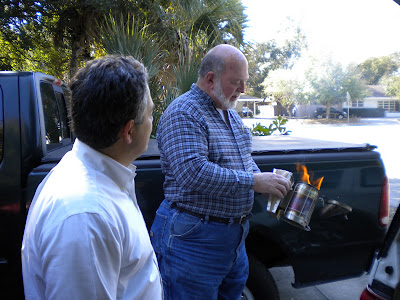 Meet Kevin Lausman, an apiologist, and master beekeeper. Here is my problem. A hive of bees has moved into a small boxed in section of my bedroom ceiling almost directly above the bed, and they have been busy. You can hear the droning, and it is time for them to go, permanently. Kevin, and his "in training" associate Tory Uccello are going to do this sweet job. Their goal is to capture the bees, and to relocate them to a new home, which will be located some place other than my bedroom ceiling, far away. 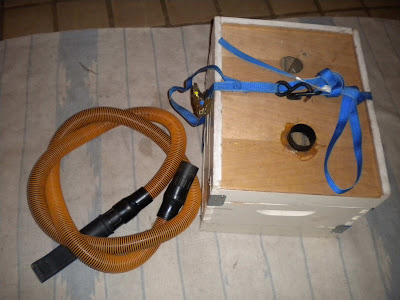 I know there is a tool for every job, but my horizons have been expanded, after being introduced to the bee vacuum cleaner. A shop vac hose plugs into the top of the box, and the bee collection hose plugs into the bottom side of the box. Inside is a mesh screen that the bees can't get through. They get sucked up, and end up in the box without being hurt. 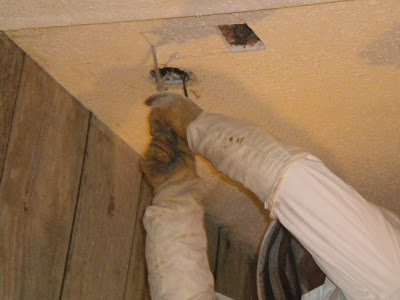 The process of hive removal is fairly straight forward. Using a stethoscope, and a laser thermometer, Kevin quickly sizes up where the hive is, and and starts to cut a hole by the back of the hive. The reason for this is that the more aggressive guard bees are at the entrance of the hive. 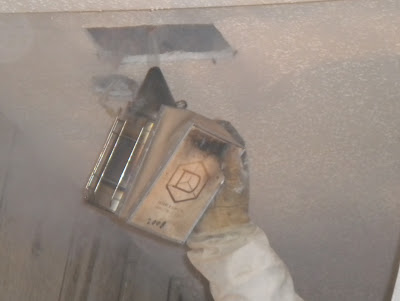 A little smoke is wafted into the hive to help quiet them down, and the hole is enlarged enough to do the extraction. 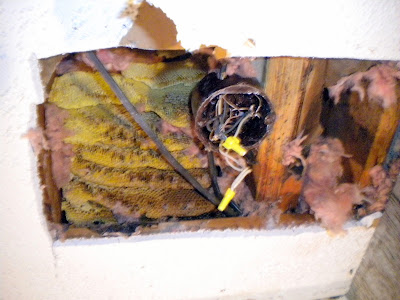 And there is the hive, looking like something out of the movie "Alien". It actually extends further back (or down in the picture). It was in an area about 18" x 2'  and about 10" deep. 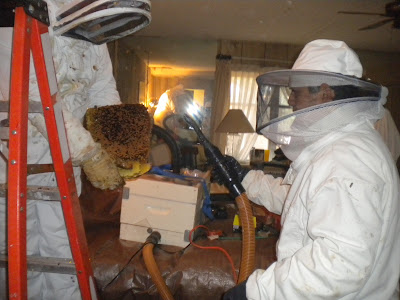 Tarps have been laid down, and Kevin takes a knife, and going from back, to front, starts to cut out the combs. As he does so, there are bees covering the combs, and Tory vacuums the bees off. As the combs are being cut away, Kevin is sorting them. The honey combs go into one bucket, and the combs containing bees in progress, and other things, I guess, go into another. This continues until all of the combs are removed. The amazing thing about this is I'm standing within a couple feet of all this, with no bee suit, and they didn't bother, or sting me at all.

After the combs are removed, Kevin sprays an almond smelling solution in the space that won't hurt the bees, but keeps them away from the hive remains. The bees that were flying around loose in the room all migrated to the light from the windows, and they were vacuumed up off the screens. In about four hours, about 15,000 bees were caught, and will go to a new hive, where they will do hard, but useful labor for the rest of their life. The queen's hive was found, but no queen was seen, although she might have been vacuumed already, or according to Kevin, the hive may have recently swarmed.
I was left with about 15 lbs of honey comb, and instructions on how the extract the honey. The last part of this exercise was to at least temporarily close the hole. I did this with a piece of smoked plastic from a Searay remodel, although looking at Kate's face when she saw it, I instantly realized that opaque anything would have been a better marital solution. I will tape some paper over it. Expanding foam was used to fill the entrance crack on the outside of the house. 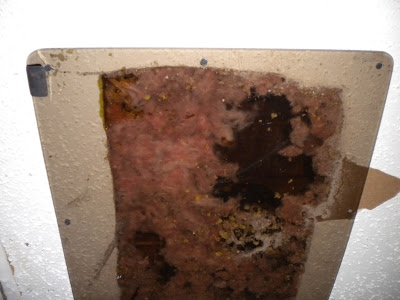 The boating tie in is that Kevin removed a hive from a trailered catamaran last week. In this case, the bees were using the transom drain hole as an entrance, and it was fortunate that there was an access plate in the hull to allow hive removal. The problem with this type of infestation, is the hive must be removed, or malodorous things will happen. Dead bees, lots of honey, and wax will result in a bunch of other things moving in to dine on the rotting feast.
There was a scenario where I could have killed the bees with insecticide, and theoretically removed the bees, and hive myself, but Kevin's solution of saving the bees, wax, and honey was more elegant, educational, and very satisfying. This is a job best left to experts, with bee suits. When Kevin first looked at the problem, we were standing outside the house, looking at the bees come and go from the entrance, and I asked him if the bees were africanized. He grinned and said no, because if they were, we would have already been "tagged". I have already discussed rats in boats, and at some point in the future it will be the Black Widow spiders and wasps turn. So much pestilence, so little time, especially when you live in Florida.
Bees are important, and useful little insects. They play a critical, and important environmental role in the pollination a huge variety of plants, and crops, and their role can't  be replaced by human effort. You can learn more about the role of bees in our lives below.
Wikipedia on Bees
Kevin Lausman, master beekeeper can be reached at Suncoastbeekeeper@verizon.net
Posted by Bill Bishop - Parmain at 7:14 AM No comments: