An Everglades 35 with some very clever dockside bondage work.

I always like nice rope work, and I can do the basics, but although functional, it never looks as good as this exceptional example does. This is my friend Mel Glickman's 35 Everglades, and it lives in the Tripp and Davis marina in South Dartmouth MA. I have a special relationship with this boat. When Mel bought it new, he wanted electronics for it. Although the boat was not geographically attractive to do the work myself, I designed its systems, prepared a bill of materiels, did wiring diagrams, and installation notes, purchased, and shipped all of the gear to Mel, who had it locally installed. It has twin Garmin 5212 12" touch screen displays, HD radar, 300 VHF AIS, sounder module, and a 1000W transducer. With only a couple minor tribulations (you had to read the wiring diagrams) everything worked out ok, and my long distance relationship with the vessel continues to this day. So when Mel sent me these pictures I was amazed, to say the least. 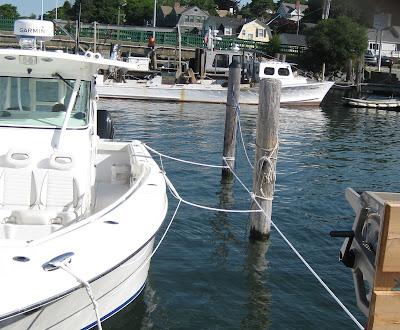 Although it looks complicated, this is elegant simplicity at its very best. A line was stretched from the dock, around the pilings, and snugged up with a come along. The height of the piling line is the middle of the average high and low tidal heights, relative to the length of the dock lines. Dock lines were spliced into the piling lines at the correct pre-measured locations, and then a tag line was spliced in to the the dock line's eye splices, that connects all three lines together. You can see below a cleated dock line with the tag line spliced into it. 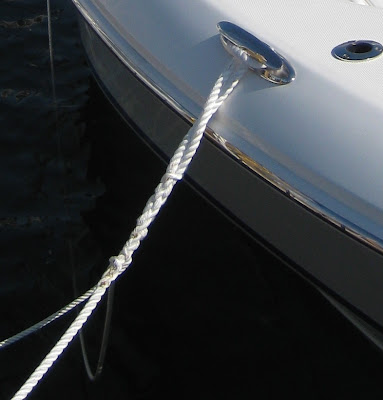 And here is a picture of the boat tied up, and now for the elegant part of this system. When Mel comes into dock, he favors the windward side. All he has to do is grab the tag line anywhere and slide his hand to the amidships dock line and cleat it off. He then uses the tag line to access the other two lines to cleat them off. He does the same thing on the other side, and job done, in a literal  minute. Badda Bing, Badda Boom. No boat hooks, no casting aspersions on the crews skills, no final adjustments, or tape marks on the lines, just grab the tag line, anywhere, and it's easy, with the added bonus that your wife will like you even more when you come into dock, and she has to manage the lines.

It gets even better. In this slip, when you cast off the dock lines, they hang clear of the water, and the spring lines are also in effect built in, so no crossing of lines over the outboard motors that will get caught up, and or chafe the motor's covers. By the way, you can do this with larger boats also. 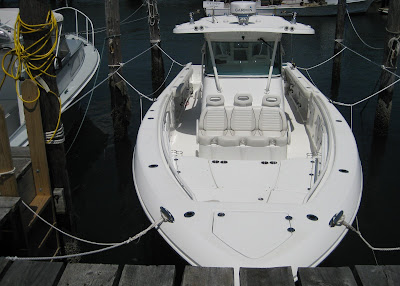 But what I truly liked the best, was the wonderful attention to detail, because even the hose is attached to the tag line with a spliced in snap hook. And... 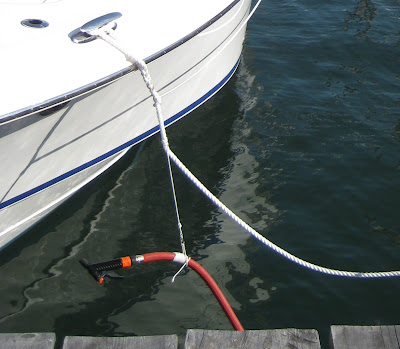 The hose is on a reel, and already turned on, so when Mel gets off the boat, after rinsing it off, with his 40 lb Striper, he just cranks in the extra hose, and he is done. Okay not quite, he still has to fillet the huge Striper, and talk boats with his colleagues. 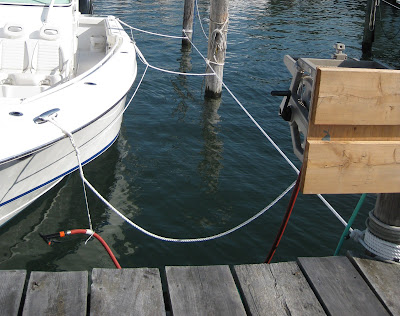 I could not have done this type of work, But South Dartmouth based Captain Steve Camera can, and did. Steve is one of those consummate captains who has spent a lifetime on the water, in more boats than I could ever count. Mel says, "He knows where the fish are, every time", and after having spent a most enjoyable hour with him on the phone, I believe him. Steve charters out of the South Dartmouth area, and organizes several fishing expeditions a year to locations like Costa Rica, and is planning an Alaskan fishing trip next summer. So if you are interested in one of his trips, or need some advice on how to do this type of rope work, Steve says call him, and he will try to help. His number is 508-989-4852. You will find him to be a most engaging, professional, and fun person to talk to. Thanks Mel and Steve, it was fun.
Posted by Bill Bishop - Parmain at 11:46 AM No comments: