Much has been going on behind the scenes with the Signal K project which has culminated with NMEA's formal recognition of Signal K that appeared on their website yesterday,  and the most excellent article about all of this by Ben Ellison on Panbo.

So I thought I would post some FAQ's about the project and provide a glimpse of what a system would look like on a boat. There are three pieces to the system. In this beta installation I'm using a Raspberry Pi-2 as the interim server. It has a Ethernet connection to the Netgear router, four USB ports, a SD card slot and will be powered by a dual USB charging port. The yet to come NMEA 2000 Signal K gateway will be installed behind the panel. The router power is going to be reconnected behind the panel. The SS clam shell will be painted black so it doesn't stick out like a sore thumb.

The point is a Signal K installation doesn't require much space, doesn't have to be ugly, won't cost much and the bonus is you get a wireless access point on your boat. I'm finishing a piece on this install which will pop out shortly. 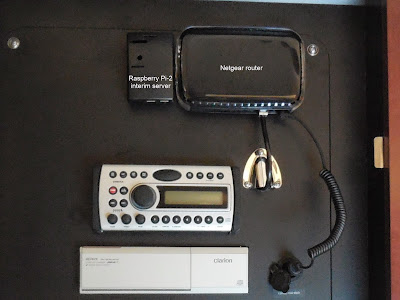