It's Just Ducky it's a LARC V

The LARC V (Lighter Amphibious Resupply Cargo-5 ton) was designed in the very late fifties, and went into production in the early sixties. The LARC V was the smallest of the LARC family with a 5 ton payload. There was also a LARC XV (15 ton), and a LARC VX (60 ton). An earlier version of the LARC LX was called a BARC. About 900 LARC V's were built, and about 600 were sunk as a means to dispose of them as the US pulled out of Vietnam. That left about 300 vehicles. A few LARC V's are still in active service, both in the US, and abroad, but not many are left today. 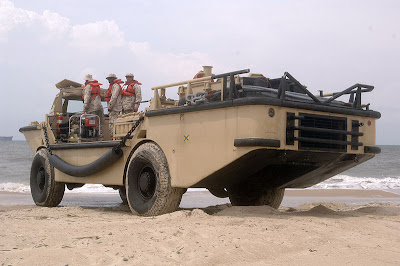 This is one of the few remaining LARC V's, and don't confuse this with the DUKW vehicles that were used in the WWII, and are still used today for "Duck Tours" in many locations in the US, and elsewhere. Lets take at look at captain Leonard Stewart's "J. B Dolphin", whose keel was laid in January 1966. This is one of the few businesses where you need both a captains, and a commercial drivers licence. 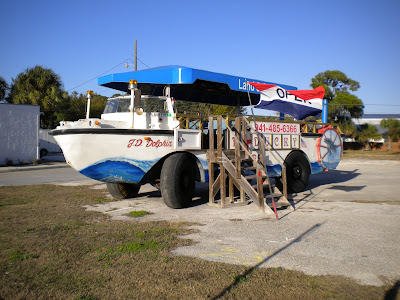 It is actually both a decent boat, and not a bad vehicle on the ground, but to get the functionality of both, there are always compromises. The LARC V is all wheel drive, and on land it can do little less than 30 mph, but it has no suspension. You would really have to hang on tight on a bumpy road at 30mph. 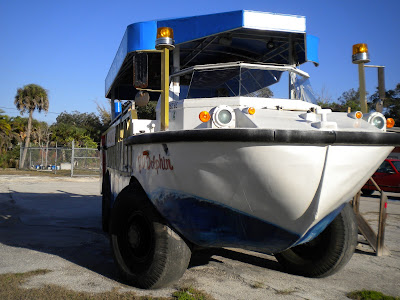 Propelled by a single screw, its max water speed is about 10mph. It certainly would be classified as a full displacement vessel. Turning the steering wheel, turns the rudder, and the front wheels at the same time. The large front tires help to turn the LARC V. 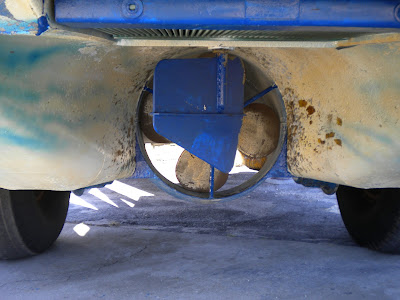 The LARC V is actually a very sturdy vessel, and I would deem it to be more seaworthy than it might appear at first blush. Unlike its older relative the DUKW which is a WWII vintage craft, the LARC V has an excellent record in this type of tour operation. Three LARC V's were used in very high winds, and seas to rescue passengers on the Nella Dan which ended up on the rocks at the sub antarctic island of Macquarie. 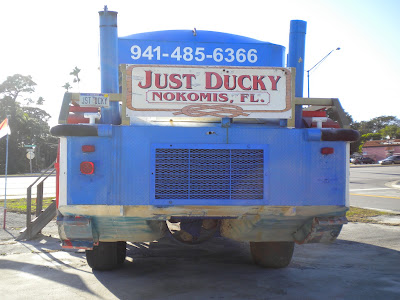 The "Just Ducky" tour starts in Nokomis Florida, and drives through Venice to the old train station where it enters the water, and travels north in the Intercoastal Waterway back to Nokomis. This is a tough vessel to ground, especially when you consider it can just drive over a sandbar, and back into the water again. I have some clients that could use this type of technology. 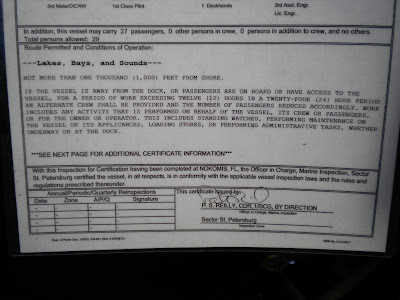 Very safe, a lot of fun, and a real local piece of boating naval history. It was fun to spend some time on it, and many thanks to Captain Stewart for taking the time to talk with me.
The first photo of the LARC-V is from Wikipedia commons.
Posted by Bill Bishop - Parmain at 12:53 PM 1 comment:

It has been pointed out to me by marketing staff, that employees are not doing an adequate job of sealing conduit pull locations, and we must improve this vital function. Because of this, we have retained the renown installer Steve Stickus who is a past winner of the prestigious S.M.I.T.E awards to provide special training classes for all employees on adhesive sealant application techniques. 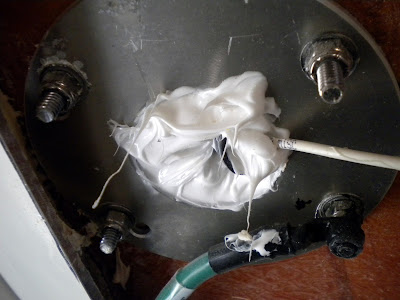 To achieve this end we have also purchased new, state of the art high pressure sealing systems with 1000 psi compressors, and high flow volume application guns to insure that all employees have the right equipment to perform this critical task. 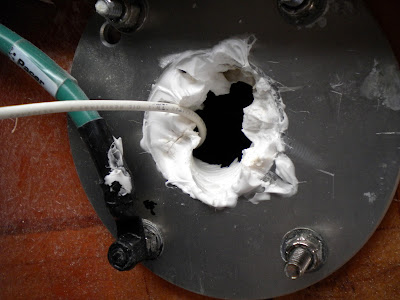 Our goal is to provide the worlds finest yachts, and if each end of conduit wire pulls need to be very well sealed, then we should do our very best to insure this happens. We certainly wouldn't want anything to get into these pulls after we ship the yacht. 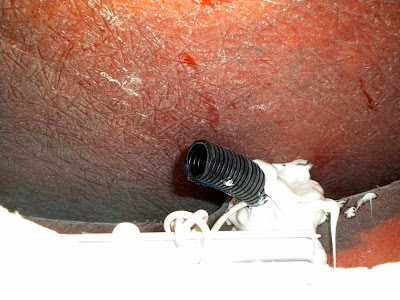 Corporate training staff will send each department a schedule for the employee sealant training next week. These will be four hour courses, and a certificate for completion will be awarded to each employee. The Sales and Marketing departments are excused from taking this training due to the corporate planning meeting scheduled in Las Vegas next week. 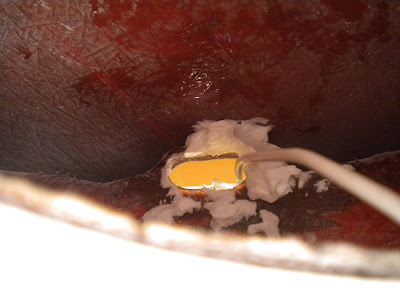 Thank you for your cooperation in this important endeavor. J.P. Grunion, President - Magnifico Yachts 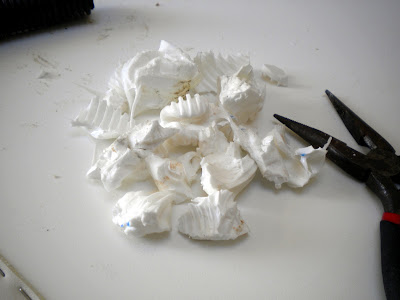 It just beats the crap out of me why they would do this. This was part of the pull from the hardtop to the console. The one place where water could get in was not sealed at all. The place that water could not get in at all was sealed to the max. It took about a half an hour of hacking and slashing to get this rubbery goo out of the pull ends. The cables I had to pull were radar power, radar data, N2K, VHF antenna, and XM audio, and you know they would have all fit through that small 1/2" piece of split loom, right?
Posted by Bill Bishop - Parmain at 8:47 AM 1 comment: