Combinatoric permutations of Shackleton, his whiskey, and the NZAHT

"I thought you'd rather have a live donkey than a dead lion."


Ernest Shackleton's comment to his wife Emily, regarding his failure to reach the south pole. 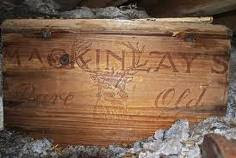 I couldn't resist starting off with a hundred year old case of scotch whiskey discovered frozen under the floor of Ernest Shackleton's Cape Royds hut in Antarctica in 2006, but this is only a small, but fun part of the story.  I will return to the whiskey a little later. The real story is about the early Antarctic explorer's bases, and the historical restoration that is occurring, in this remote, and getting less remote part of the world. As the title indicates, the subject matter will move around as it suits my whims, and I'm going to leave a good trail behind for you to explore further. 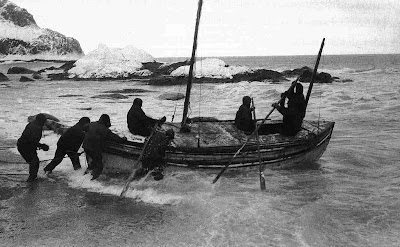 I have chosen Ernest Shackleton as the focus, because many boaters are familiar, in particular with his audacious 800 mile small open boat journey in the "James Caird" (actual picture of the launching is above), with five crew members from Elephant Island (just off the coast of Antarctica) to South Georgia Island where a whaling station was located, and thus saving all of the crew from the ice trapped Endurance. This and Captain Bligh's 3600 mile small boat trip, are two of the most epic events of this type ever recorded.

Okay now, just bear with me a little longer, and we will have some fun. Who owns Antarctica? The answer is a lot of countries have territorial claims, but in essence no one. The continent is open by treaty, to legitimate scientific investigation. There is no mining, industrial, or military activity allowed on the continent.

For over 50 years now New Zealand has taken care of the historical Antarctic sites located in the Ross Sea area. In the late fifties attention was drawn to the condition of the early expedition outposts, and some attention started to be paid to these historic sites. By 1960 a more formal plan had been drafted to undertake restoration. The New Zealand Antarctic Society had primarily managed the historic  restoration efforts, but never quite had the needed resources. The New Zealand Antarctic Heritage Trust was founded in 1987, and has managed the restoration activities to date. Since then Shackleton's hut has been mostly restored (work will always be ongoing), and over 5000 artifacts from the site have been added into the Shackleton collection. Activities are well underway at other sites, including Scott's hut. I don't need to remind you that work at these sites is part time. I understand the winters are a tough time to work outdoors, and the summers don't always have to be kind. 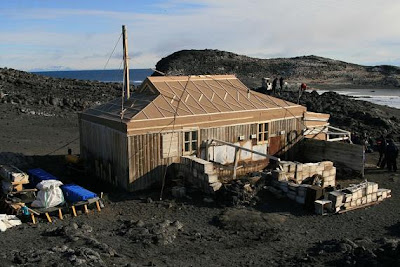 Above is a more contemporary view of Shackleton's hut, after a great amount of effort.

Okay, lets have some fun now. It's Whiskey time! This is a very small part of the conservation effort, but the massive publicity over finding a case of 100 year old Whiskey, in the Antarctic of all places, had to have provided a welcome boon to the NZAHT's conservation efforts. A documentary film is being made, and who doesn't like a good story over a whiskey, or about whiskey? I averred to one of the conservators that it is their story to tell, and here you will find a terrific bog written from the "Whisky" conservator's point of view, and with great photo's titled The Great Whisky Crate Thaw. On the same  subject, I tried to dig out some information from Richard Paterson, who is Whyte & Mackay's master blender, but he was somewhat reticent to discuss how he could recreate the whisky, if he had a sample. It is not clear that he will get one, but I know he sure wants one. You can get more information about this subject at Whyte & Mackay's "Master Blender" page. Yes the company that sold Shackleton the whiskey is still around, or more correctly, Whyte & Mackay owns the label (Mackinlays Rare Old Highland Malt Whisky).

These early ventures were truly scientific ventures, and a great amount of expense and effort went into planning and outfitting these expeditions. Remember when I mentioned that the Shackleton Nimrod expedition reminded me of the Apollo moon missions?  Both Shackleton, and the moon astronauts took cars along on their expeditions. Shackleton's car never performed up to expectations in the harsh Antarctic condition's, but it was the first auto on the continent. 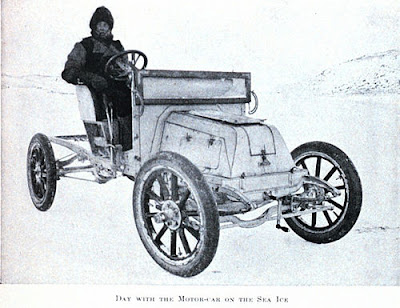 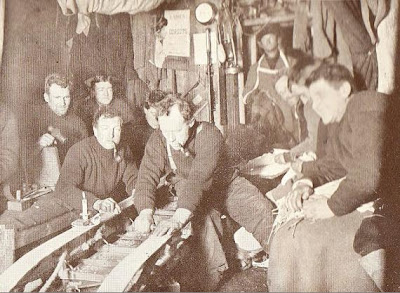 Above is a photo of Nimrod expedition explorers in the hut.

I'm not the only one to spot it, but you can see next to the clock, a large advertising flyer for ladies corsets with a young lady pictured sporting one. No doubt in my mind, this is the same type of "Pin Up" that is in my mechanics garage, except his is far more scantly dressed, if at all. I wonder if the flyer it is still around? It is listed on the Nimrod expedition "Provisioning" list link above. 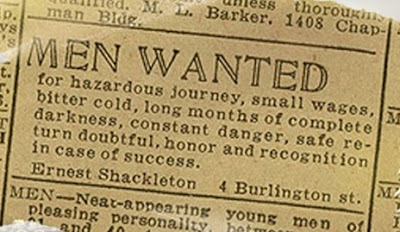 Another fun Shackleton tidbit is this ad that has been floating around for years. Many scholars have researched it, and it is a fake. 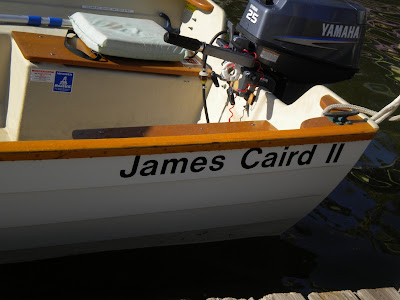 I spotted this cute dingy a couple of days before I started to assemble this story. I asked the owner why it was named the James Caird II. He stopped, smiled, and said "Because Shackleton owns the James Caird I".

A last couple of thoughts. I think the NZAHT should give Richard Paterson a wee few drams of the whisky, for a price, and a cut of any sales generated from selling Shackleton's/Mackinlay's whisky. Shackleton won't miss it, and the revenue stream from sales can be put to good use on other projects. Also, if you give him a sample, do a real analysis on the contents. Richard can nose it, but good sample analysis should be done, and Richard, if I have had anything to do with getting you a sample, send me a case of the new Shackleton whisky, I will pay the NZAHT royalties portion, and the freight.

And for the historians, what ever happened to Shackleton's car? I could only find a few obscure references that mention it being donated to a museum. Could it still be in Antarctica, hidden in a snow drift?

Want to see Shackleton's hut? about 900 people a year do, and an expected 80,000 people will visit Antarctica this year, and this is one way to get there.
The New Zealand Antarctic Heritage Trust An excellent site worth spending time at, and they always need help, fiscally at any rate.
The Canterbury Museum The "Whisky" conservation is being done there.
Want to see what Shackleton's hut looks like right now, visit the Penguin Cam at Cape Royds
Lots of Antarctic links here
Posted by Bill Bishop - Parmain at 8:01 PM 1 comment: