The "Yogattorney" and the Kerala houseboats of India.

Nancy, is a yogattorney. Yes it's spelled right, sort of, because she is both an attorney, and a Iyengar yoga instructer. The yogattorney makes frequent trips to India, and on her last trip, she had the opportunity to take a trip on one of the famous Kerala house boats from Cochin to Kovalam Beach in the Indian state of Kerala. So playing the game of "Where in the world is Nancy?", I have constructed a little map to show you where Kerala is.

The state of Kerala, is located on the very southwestern coast of India facing the Arabian sea. It's bounded to the east by the Western Ghats mountain range, and then transitions to low coastal plains, and the Kerala backwaters areas on the coast. The climate is tropical and it lies just north of the equator (8 to 12 degrees north latitude). Millions of tourists are drawn to Kerala for its lush tropical backwaters, biodiversity, and 370 miles of beaches. 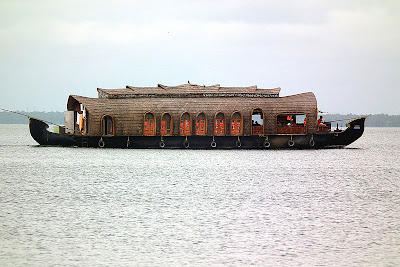 The houseboat Nancy traveled on is in the local parlance a kettuvallam, an ancient form of watercraft that has been plying India's waters for centuries. The kettuvallam is historically a double ended cargo vessel used to transport goods such as rice, and spices up and down the coasts, and into the more remote backwaters. They are by design shallow draft, and can also be poled when needed.

With the advent of the modern world, the automobile, the backwater areas became crisscrossed with roads, and bridges that steadily reduced the areas the kettuvallams could access. This coupled with less expensive transport of goods by truck made shipping by kettuvallam less viable. Over time the numbers of larger kettuvallams, especially the sailing versions were dwindling away, and more importantly the pool of skilled artisans who knew how to build these vessels were diminishing with them.

What's so fascinating about these very graceful, and elegant watercraft is that they can be upwards of 100' long, and they are literally tied together, hull and all, using a rope made from coconut husks. These boats are completely made of local indigenous raw materials, using simple hand tools, and techniques that have been used to build them for over two thousand years. 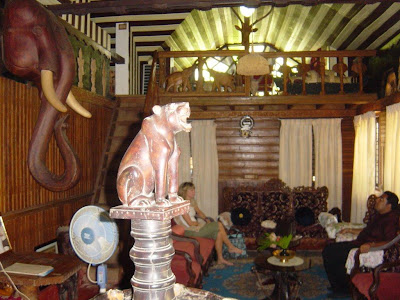 In the late eighties Babu Varghese, an Indian entrepreneur and tour operator spearheaded an effort to take the traditional kettuvallam, and transform it into a houseboat suitable for ecotourism, and at the same time reviving the art of building them. The first "Kerala house boat" was launched in 1991, and ever since this specialized floating tour business has flourished, with hundreds of these vessels built, and directly, and indirectly employing thousands of workers. 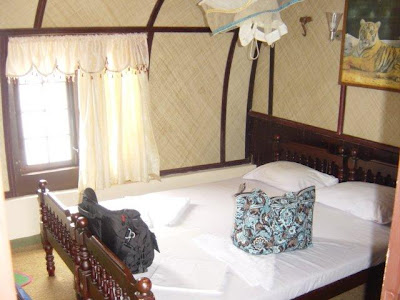 Despite the simple tools, and lack of mechanized boat building technologies, the Kerala kettuvallam houseboats are beautifully executed, and finished. They have all of the amenities one would expect to find on a modern boat, but with a traditional, and hand crafted elegance, that comes through the clever, and skillful use of all natural materials. Unlike the original kettuvallams, most of these house boat versions are now engine powered, and still, in many cases often oar steered. In some locations in the backwaters, poling is required to maneuver in some areas. 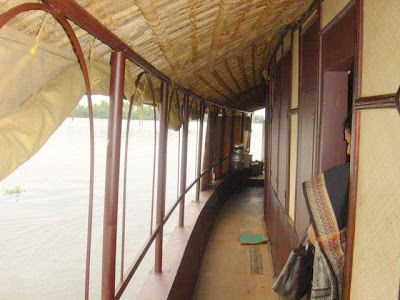 The Kettuvallam's primary building materials, are all local, and sustainable consisting of white coir rope, and brown coir (both from coconut husks), bamboo, anjili wood for the hulls, palm leaf thatching, and a caustic water proofing oil derived from boiling cashew shells. With these few simple materials, a gorgeous boat is built. 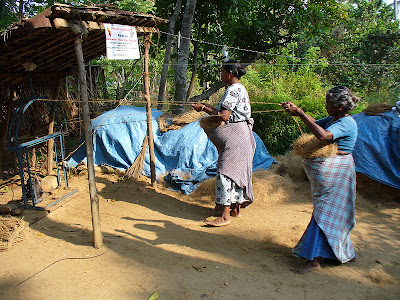 Coir rope is made by soaking the husks from immature coconuts (white coir) for many months in a process called water retting uses micro-organisms to dissolve the plant matter around the fibers. The remaining husks are then beaten to loosen the fibers which are separated by hand. The fibers are spun into a yarn used make rope typically with the aid of a spinning wheel.


The mature coconut husks (brown coir) are treated in a similar way, but it does not require the very long retting periods of the white coir. Brown coir is used for floor mats mattress stuffing, and other utility purposes. Coir is relatively waterproof, and is one of the few natural fibers that is resistant to damage by salt water, making it ideal for boat building use. 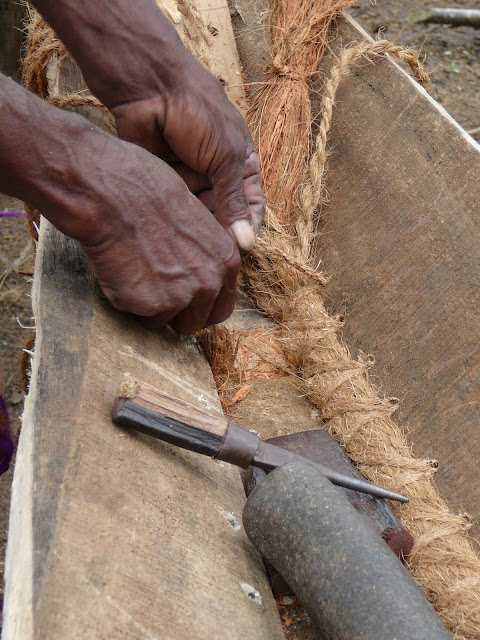 The word "Kettuvallam" comes from the Malayalam word kettu, meaning to tie, and vallam, meaning boat, and hence the literal meaning "tied boat".

The unique aspect of kettuvallam construction is the hull planks are physically tied together. Planks are spiled, and shaped just like all wooden boat builders have done for centuries, but the difference here is the hull planks have holes drilled in them at the edges allowing them to be stiched together. Larger vessels have plank edges cut in a tongue and groove shape to provide additional interlocking strength to the joints.

White coir rope is used to lash the planks together encapsulating a bundle of brown coir that is being hammered to reduce its volume as the coir rope is being tightened. The brown coir acts as the hull plank crack filler, and serves the same role oakum does in traditional western boat building.

The stitched seams (kettu) are then coated with a paste of charcoal powder, lime, and fish oil for water proofing, and the hull is then over coated with cashew nut shell oil/resin, and charcoal powder. The charcoal powder gives the hull its distinctive black color, and the caustic cashew resin coating makes the hull resistant to wood boring molluscs. There are regional variations in the recipes of these natural coatings that vary somewhat from builder to builder.

The vessel you see being tied in the photo above is a smaller kettuvalam referred to locally as a "1/3 load" kettuvallam, that is used for mud collecting, sand mining and the ilk. (See the link to Dr. Ransley's project synopsis below to see how important this function is). 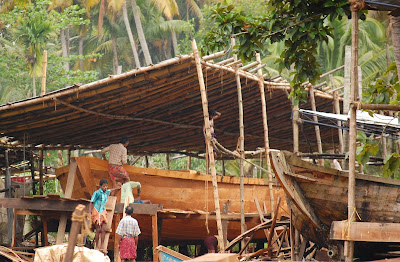 The end result of all of this activity is a hull that is fair, strong, and very durable. Kettuvallam house boats typically have substantial spine planks (keel), stems (fore and aft), and gunwales.

In the photograph, you can see the gunwales are made of scarfed planks that have been secured with large copper rivets, and or roves. The same system is being used to secure the primary framing structures to the inside of the hulls. We are looking at the sterns of both boats. I think I see a drive shaft hole on the left kettuvallam, and I can clearly see it on the right one. 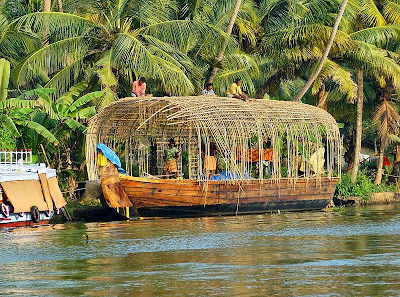 The finished hull gets decked, and a curvaceous frame of split bamboo is tied together with coir rope to make the superstructure. Thatched/woven palm leaves are tied onto the frame, and additional split bamboo frames are again lashed over the structure.

Although the superstructure appears to be flimsy, you can see in the photo there are now three people now sitting on the partially finished work. When completed the structure will be very strong and waterproof. Interiors are finished with locally available natural materials, fabrics, and carpets. In the end, it's striking how such graceful, durable, and watertight vessels can be constructed out of such very basic materials, and with so little modern boat building technology being utilized. These vessels are truly testaments to the skills of their artisans and a time proven design. 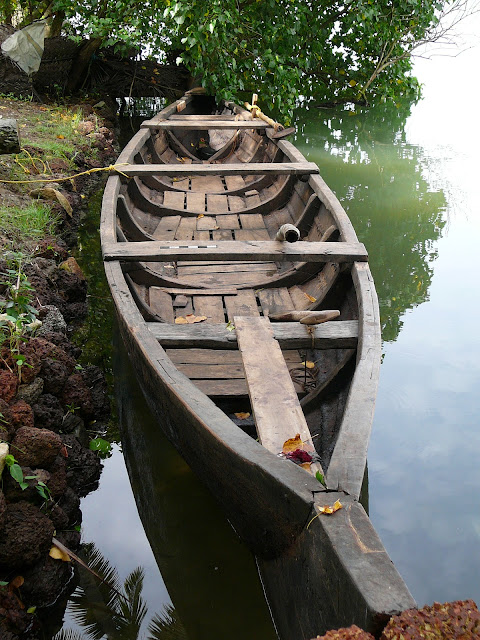 I want to leave this little vignette with this photograph and a few thoughts that struck me about this smaller kettuvallam. The first is that if you rolled the clock back a thousand years, the ancestor of this boat would likely be very similar to this one.

Looking closely at the construction details as a boat builder myself, I recognize many of the construction elements and I believe much of today's modern wood boat building techniques owe their beginnings to this ageless craft, and the many generations of talented artisans who have crafted them. Although this boat building approach has been used in India for many centuries, we didn't get around to adopting it until 1964. We were a little slow out of the gate. 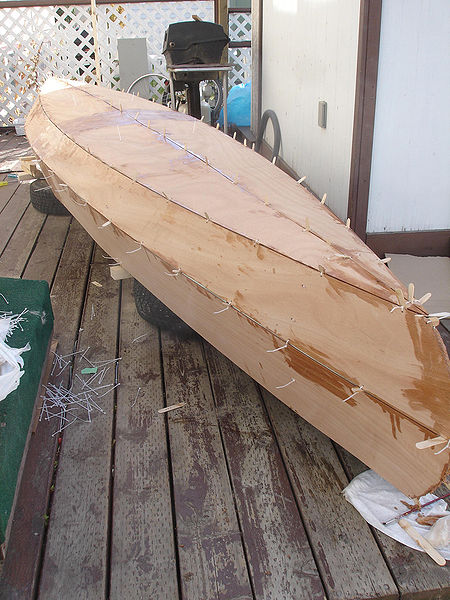 Many thanks to Dr. Jesse Ransley, Archaeology, University of Southampton, UK for the use of her photos showing the tying of a kettuvallam hull as well as the one above and her cultural insights. You can find her project synopsis "The Back Water Boats of Kerala (2005-2009)" here.


The first kettuvallam photo is from Wikipedia, and was taken by user Ramesh NG.

The photo of coir yarn spinning is from Wikipedia, and was taken by user Bricaniwi.

The photos of the kettuvallam bamboo framing, and hull construction are from Wikipedia, and was taken by user Challiyan.

The photos of the "stitch and sew" canoe is  from Wikipedia, and was taken by Kevin Saff.


All other photos courtesy of the Yogattorney. Her Iyengar yoga organization website is here.

The map is by the Installer.

This is a good video of a kettuvallam being repaired, and showing the hull "stitching" technique.

If you're interested in a Kerala houseboat trip, Tourindia is a good place to start.
Posted by Bill Bishop - Parmain at 7:51 PM 4 comments: