Monday, July 5th 10:42 am: We were working a bunko, when I got the call about a suspicious arson death. I hurried over to the scene before the beat guys tromped all over the evidence. It wasn't a pretty scene. The body had been moved, leaving a charred spot, and the coroner was in route. I interviewed the boat owner, and he said he just turned around, and saw the fire, he also said Mr. Electricity was hanging around at the time. He pulled the plug, and the fire went out, but continued to smolder, and Mr. Electricity went on the lam. The stench from the fire was gut wrenching, and I worked at controlling my gag reflex. I've been around, but this was as bad as I have seen. 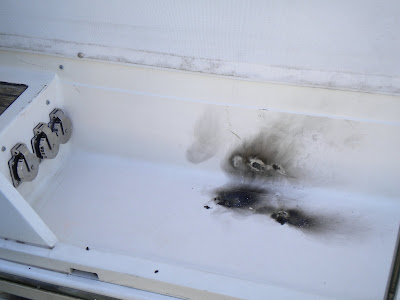 Tuesday July 5th 12:01 pm: The coroner showed up to take the victim to the morgue for an autopsy, and shook his head. "This body is is in bad shape, I may have to work hard to find the cause of death." I spoke to a couple more witnesses, and one said, he had "seen Mr. Aqueous hanging around before the fire, and he looked suspicious". I said,  "Just the facts sir". I  made a note on my pad to grill him later about the incident. Wednesday July 5th 8:05 am: I went to visit the coroner, to see if he was able to determine COD. The body didn't look good. The burnt skin had been cut off, and what was left, wasn't for the faint hearted. The coroner said "Mr. Electricity had definitely been involved here, but I think he must have had some help." 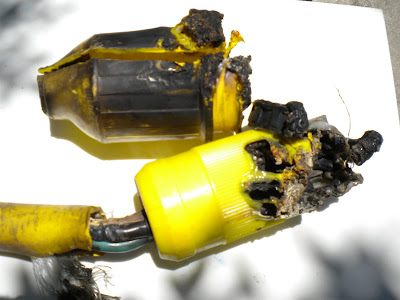 Wednesday July 5th 6:53 pm: I found Mr Aqueous at a local hangout, and took his statement. "Yeah, I was around, it ain't against the law, it's a free country you know. Mr. Electricity is who you need to talk to. I was just minding my own business, when he started to get angry, and all sparky like. He was getting out of hand, and I left, and hey, I don't have to talk to you copper, get a warrant." 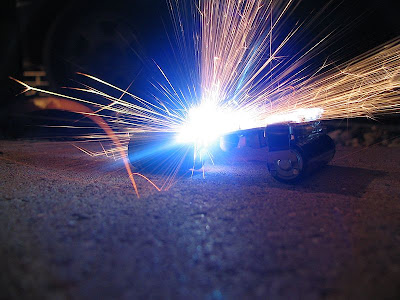 Wednesday July 5th 11:21 pm: You throw a party and that certification gets in the way. All of a sudden there isn't a straight man in the crowd. Everybody's a comedian. "Don't spark too much," somebody says, "or the man with a certification 'll run you in." Or "How's it going, Circuit Tracer? How many fuses did you pinch today?" Mr. Electricity was having way too much fun, and I arrested him, and booked him under section 301 C, felonious sparking. In the car, I asked him if he had anything to say, and sneering he said, "OK, so I helped with the sparking, it's what I do! Now throw me in the bucket!" I sent Officer Johnson over to pick up Mr. Aqueous, and booked him under section 567 D, aiding and abetting a sparking.
There are over a dozen men in this city who know that being a marine installer is an endless, glamorless, thankless job that's gotta be done. I know it, too. And I'm damned glad to be one of them.
The coroner's summary goes something like this. The shore power cable was a fifty amp cable that went from the pedestal to a thirty amp splitter that was plugged into the inlets on the boat. The connections, although reasonably watertight, were not designed for immersion. It turns out that the boat had a slight list to starboard, and after a rain, the connectors were laying in about a half inch of water. We had about a solid week of rain, and although the fire started on first dry day after the small monsoon we had, the damage was already done, but not yet apparent. I think the cable had been shorting for a while, via the rain water, and was already damaged.
The owner just happened to be there, when the final meltdown started, the connector caught fire, and he was able to quickly remove the power. The ground wire was disconnected from the plug pin, and was spot welded somewhat to the black L1 wire. The copper was good in the cable, and all of the heat was being generated, at the shorted location. The odd thing here was that neither the vessel's, or pedestal's breakers were popped. As you can see in the first picture, had someone not been there, a real vessel fire was very probable.
You don't often see things, when they are hidden in plain sight. The pictures below are examples of less than perfect shore power connections. I did a story a while ago, about a little box Stephen Rhodes, and Captain Abner Pires thought, up and implemented. This clever idea lifts the shore power connectors off the ground, and covers them to keep the connections dry. I thought it was a good idea then, and even more so now. You can find the story here. 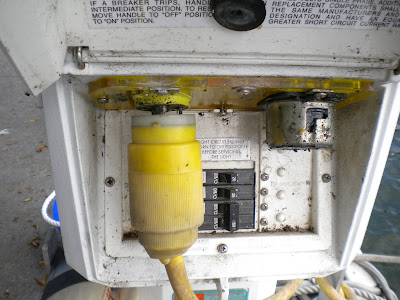 This is a no no! The cable is plugged into the standard household three prong outlet, and then into a thirty amp inlet on the boat. This outlet is for buffers, not thirty amp power. 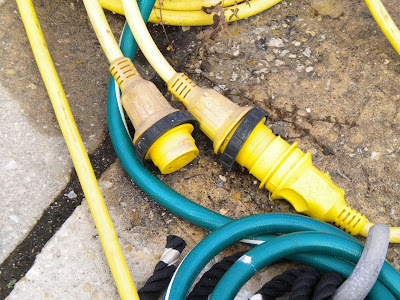 An uncovered thirty amp cord from a splitter. Note the wet ground around it, a hose has been leaking. 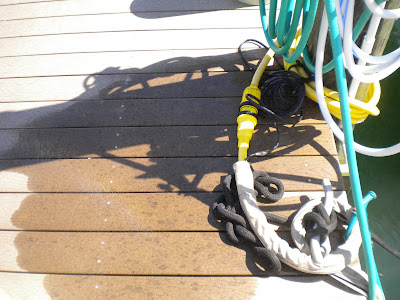 What you can't see well in the picture, is the fact that the boat is being washed, and water is spraying on the shore power connector, which is directly under the hose bib. This connection has some issues, including the exposed ground connection, positioned so rain water can run into it. I don't know what the tape is all about, but it can't be there for the cosmetics.
I wandered through three marinas, and found about three dozen connections, that ranged from, it could be better, and thus safer, to outright hazards, all hidden in plan sight. Mr. Electricity, and Mr. Aqueous, go where they want, unless you book them, and throw them into the bucket.
Thanks Sgt Joe Friday for some of the lifted dialog.

Sgt Joe Friday: The subject was booked under Section 601 - in danger of leading an idle, dissolute, or immoral life.

I had forgotten, especially now in retrospect, how much fun the dialog from Dragnet really is, and some links are below:
IMDB Dragnet Quotes
More Dragnet Quotes

The picture of the "Sparks" is from Wikimedia commons, and was taken by Tim McCormack.