Good idea, epiphany of the week

This is Steven Rhodes' clever idea.It lifts the connectors above the dock keeping them dry, is easy to see, and thus harder to trip over, keeps the rain water off, makes it more difficult for the cables to end up in the drink, costs very little, and in sum smart. 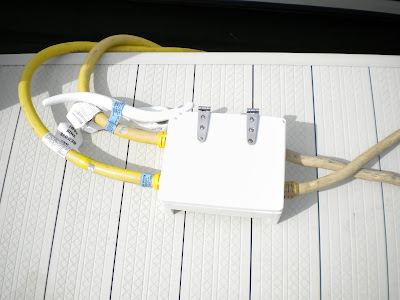 I think someone should make these. Anyone have a plastic injection molding machine? 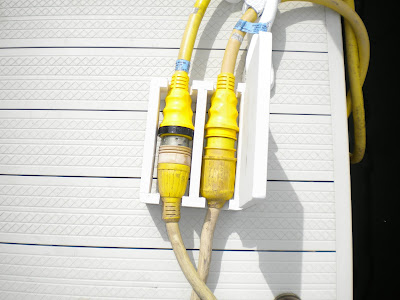 Posted by Bill Bishop - Parmain at 2:53 PM No comments:

These are a few recent upgrade surgeries we have performed, and as always, you can "click on the pic" to get a better view.
Below is a two year old Boston Whaler 22 Dauntless, that the owner just purchased. The transducer had been broken off by a marina storage bunk, and the owner didn't want the existing electronics consisting of a small GPS, and a separate small fish finder. We were asked to install a Garmin 5208 touch screen, GSD22 sounder module, new transducer, along with a reverse image camera so the driver could watch skiers behind the boat on the Garmin display. So we ask the boat to turn its head and cough, and out goes the old gear. 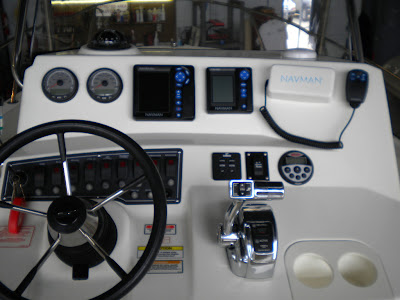 I do not know what the black goo was that was sealing the underside of the GPS engine, but it was very tenacious. When reason fails, force prevails. 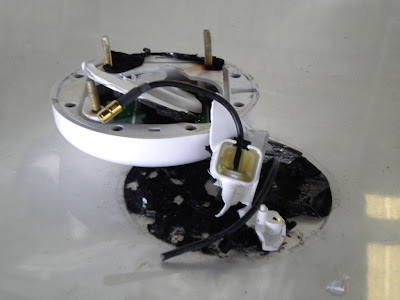 The end result turned out well, and looked very close to "new from the factory" in appearance. The camera gives a good view of the stern, and the new GPS engine covered  the black goo that did not want to come off. The boat is on its way to a new home in the Turks and Cacaos. 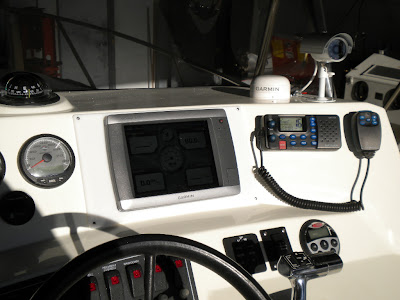 This is a Mainship trawler, and has one of the nicest interiors I have seen on one of these boats. Kudos to the decorator, it's warm and comfortable with out turning the interior into a hotel room. The upper helm had a Raymarine C-80, and an old C70 radar system on the starboard side. The problem was a new Raymarine C-90 wide had been installed at the lower helm, and there was no connectivity between the systems. The upper C-80 also had a SR50 weather module attached. The task was to install a new C-90 at the upper helm along with new digital radar, and to replace the SR50 weather module with the compatible SR100 weather module 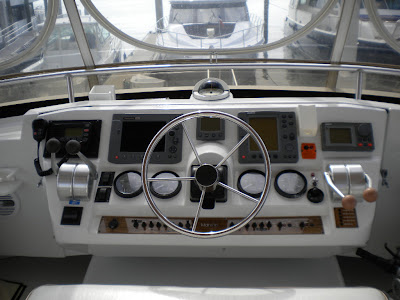 The new C-90 fit, and just fit. It's always better to be lucky than smart, but I did measure twice. There is a 1/8" reveal on each side of the overlay plate. Where the old RL70 radar was, is now a new white plate to accommodate new toys.  A network cable was pulled to connect the systems together, and we now have the Christmas miracle of full integration and capabilities at both helm stations, and it all looks better. 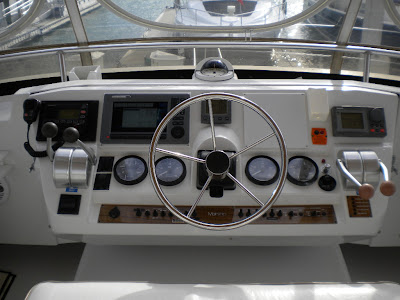 This is the console of Steven Rhodes' immaculately kept, and well founded Viking. This is a very early Garmin 5212 installation, and consists of 4 5212 displays, weather module, and open array radar. The N2K cables and toys were not yet available so the integration was done with the Garmin marine network, and hardwired NMEA 0183 interfaces, Steven bought the new Garmin 300 VHF with AIS, and there were two problems. First, there was no N2K backbone, and the second problem was because these were very early 5212's, and they required a hardware modification to receive the AIS data. Garmin did do the upgrades at no charge, and did pay for the freight in both directions. With the backbone in place, and new 5212's installed  the AIS is now working properly. A GSD22 sounder module, and in hull transducer were installed, and because the N2K backbone is now there, a GMI10 NMEA display was added at both helm stations. You can see the handset for the Garmin 300 AIS hanging next to the 5212, and the new GMI 10 is on the upper right of the console. Your running out of room Steven, if you keep buying new toys, you're going to need a bigger boat 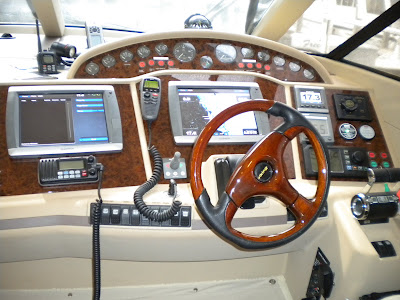 Posted by Bill Bishop - Parmain at 2:22 PM No comments: