Bob and Carol visit the Gulf of Mexico oil slick, an unfortunate series of events occur. 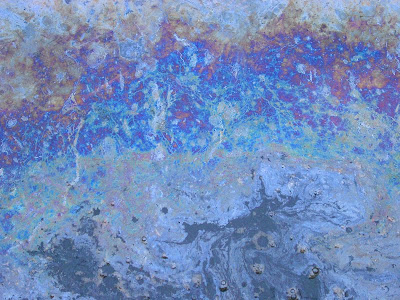 Bob and Carol were watching their favorite news channel, and listening to stories that were saying the oil slick wasn't that bad, and drilling for oil was "Good for America". We remember this insensitive, and not so bright couple, Bob, and Carol from the story about buying their new boat. So Bob, in a very rare display of initiative, tells Carol, "lets load up the boat, and go out and see what this oil slick business is all about". Bob, Carol, and the kids make sure they have all of their important marine gear. The kids grab Ipods, and video games, Carol makes sure there are plenty of chips, and dip on board, Bob gets a back up case of beer, and off they go on their Magnifico 50' yacht. It doesn't take long for Bob and Carol to see the first signs of the slick from the bridge. Bob says "this isn't that bad", and Carol says, "look at the pretty colors, but it does smell a little funny". 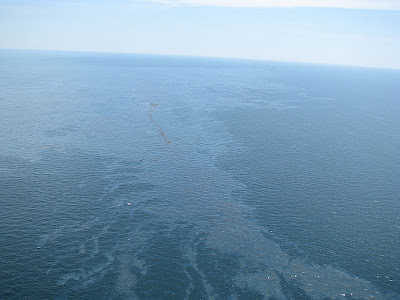 Bob and Carol, comforted by the fact that things don't seem that bad at all, carry on. Bob wants to see where the oil leak is, because he saw on TV cool pictures of things burning there, just like it was the Fourth of July. After a while, the kids emerge from the dark cool cabin complaining that it was getting a little warm. Bob says "well stay out here in the fresh air, it will do you some good". The kids wrinkle their nose at the odor, and disappear back below. Bob yells out after them, "just turn the thermostat down". Bob thinks about this for a few milliseconds, and decides the strainers haven't been cleaned for a while, and he will have his boat maintenance guy check it when they get back. 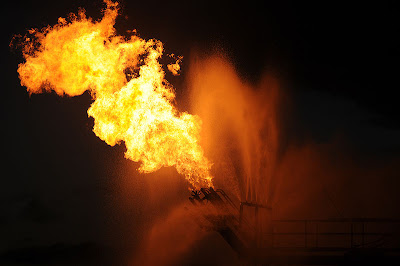 Bob is watching his favorite TV news show, on his chartplotter thingy, and isn't paying attention to the engine gauges. The temperature gauges, on both engines have started to climb slowly up. Bob asks Carol to get him another beer. Just as Carol hands him a new cold one, Bob feels a thump, and the generator shuts down. Seconds later the port engine shuts down, and alarms start squealing on the bridge. A moment later the other engine shuts down, in conjunction with a very loud clanking noise. Carol says "Stop all that high pitched noise, I'm trying to read my Cosmo". Bob turns off the engine ignition switches, and all of the alarms stop, except one. Bob frantically scans all of the gadgets on the bridge, and sees an outline of his boat, with lots of little red lights on it. The one that is lit, is marked "High Water Alarm". The kids come running up to the bridge screaming, "the floor is wet in our cabin". Bob runs down, looks into the companion way, and sees two inches of water over the carpet in the forward cabin. He also smells some exhaust fumes in the cabin.

Bob now has an inkling there may be a real problem now, and he should get some help. For the first time on the trip, he turns on the VHF radio, and starts to yell "Mayday, Mayday". The Coast Guard answers, and starts to ask questions. One of the questions is, "where are you?". It takes Bob some time to figure how to get the TV off of the chartplotter thingy, and get it on a chart page with his position. He tells them the position, and seconds later, all power on the boat disappears. Bob thinks maybe they need those orange floating jacket things, but he doesn't know where they are, and besides, Carol wouldn't get into that black greasy water anyway. One of the kids suggests that the raft in a fiberglass box behind them would be useful. They all rush to the back of the bridge and stare at it. A cord is spotted, and one of the kids jerks it, and it explodes open just in time. The water is now at the bridge, and they all pile into the orange raft, just as the vessel gracefully sinks away underneath them through the thick black goo. 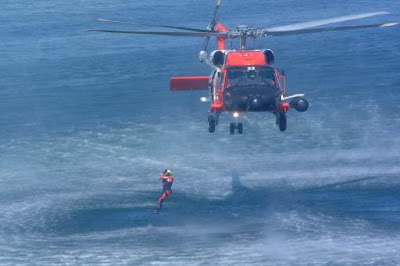 A helicopter shows up, and Bob, Carol, and the kids, are saved, but the Magnifico 50' yacht has now been added to Bob's "Museum of Shattered Dreams" vast collection.
This scenario is possible, although most likely not as Bob and Carol experienced it. I'm not going to turn this into a science fair project, but I will  layout in general terms what is in the oil slick, and what impact it could have on your boat, should you encounter it. I will also add some links for further discovery, if you are so inclined.

The goop in the water can be generically described as "Sweet Louisiana Crude" A crude oil is described as "Sweet", if it has less than .05% sulfur content. Crude oil is a hydrocarbon soup, that is processed into fuels (gasoline), solvents, and many other products. In its raw form, there are many materials naturally present such as Butane, Methane, Ethane, and many more "ane's" are on this list. All of these hydrocarbons can attack, and damage materials that are not designed to withstand contact with them.

So what does this have to do with with your boat. The chemicals present in the oil slick can attack gasket materials, and hoses that are not specifically designed to resist these hydrocarbons. Go to West Marine, and check out the cost differential between 10 feet of fuel line hose, and 10 feet of water line hose. There is a huge difference in price (400%), because materials designed to withstand degradation from hydrocarbons are much more costly to manufacture.

In Bob and Carol's case, I blamed the air conditioning system for sinking the boat, although I can certainly add many additional contributing causes. As the AC cooling water was pulled into the boat, the oil in it started to stick to the strainer basket, slowing the water flow, and hence the less cooling. The oil caused the raw water pump impeller to soften, and the hoses attached to the pump softened as well, and started to swell. With enough time, and pressure, the softened hose from the AC pump burst open, and the system starts to pump oily raw water into the bilge. This would run for a while, until the AC systems start to shut down, due to slow water flow, and the relays automatically turn off the pump. But by now the damaged impeller allows water to bypass it, and water still flows, but at a slower pace.

The generator suffered from a similar scenario, but in this case, the strainer just got plugged up with oil, and it did a high temperature shut down. It survives this time, but the entire cooling system will have to be flushed out, and the impeller replaced, at the minimum. This could be lot worse, depending on the type of cooling system it had.

I didn't talk about the head system, but if salt water was used for flushing, the oil can eat , or damage gaskets such as the joker valve, and hoses.You should also hope that manual heads had a vented loop above the water line, or this could have sunk the boat just as easily.

Now for the engines. In almost all cases, oil in the cooling water can go from just plugging things up, causing shutdowns, to destroying the engines. This goes for gas, diesel, and don't forget outboards. There are a myriad of scenarios here. In Bob's case, remember he smelled exhaust gas in the cabin? It could have come from a failed rubber exhaust elbow, that oil laden cooling water was passing through. It's tough enough job to keep cooling water away from the insides of engines, and transmissions with out worrying about all the gaskets that do that job, failing because of hydrocarbon degradation.

Can it get worse? Sure it can. How about coating your zincs with a nice thick film of oil, rendering them useless. Your ground plate for the single side band radio will also suffer the same fate. The pretty vinyl boot stripe won't like the oil, the hull can stain, and how about the water lubricated dripless stuffing boxes. I'm not sure, but I suspect cutlass bearings most likely won't like the oil either. The list here is almost endless. It's hard enough to keep a boat operating in a highly corrosive salt water environment. Add this nasty hydrocarbon goo to the mix, and you will really shorten your vessels life, and spend a lot of extra money. Did I mention the potential for a fire? A burst hose, or failed gasket spraying crude oil laden water inside a hot engine compartment, does not bode well if an ignition source was available.

The birds, and marine life aren't surviving it, and your pleasure boat won't either! 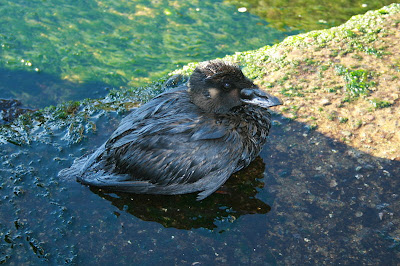 For ev'ry skimmer that ever there was
Will gather there for certain, because
Today's the day the BP Oil has their picnic
.
(With apologies  to Mr. Hall for stepping on "The Teddy's Bear's Picnic)


Want to help? Here are some sources
What is crude oil, and what's in it.


A small postscript about the story.


I received a flurry of comments today after I posted this. They range from they liked the beginning, but not the technical end, they  hated the beginning, but liked the technical end, they liked it, and they hated it, it was too political, it will discourage boating, and it just made some people uncomfortable. I have fooled around with this story on and off today. It is what it is, and it will now stay this way.


This is a simple story. Bob and Carol, are the foils. They are the Eddie Haskell's of the world, and provide the set up for a general discussion of how the oil slick could affect a vessel. If the subject matter makes people uncomfortable, I'm ok with this, it should. I live In Sarasota Florida, a place with world renowned beaches, and a community whose primary income depends on these pristine beaches, boating, and fishing. It is also a community in denial. No task forces are looking into what to do if the oil gets to us. No planning is going on. We are advertising the fact that we don't have a problem, come visit, but no one is looking forward into the future, and we should be.


Tens of millions gallons have already spilled into the Gulf, and if you accept the the more conservative number of 35,000 barrels a day now being released into the Gulf. Thats 42 gallons in a barrel * 35,000 barrels = 1,470,000 gallons per day (NOAA estimate). Now lets just assume that the relief wells won't cap this problem until mid August, lets say 60 more days. The total gallons of crude oil released just over the next 60 days would be 88,600,000 gallons, or around ten times the Exxon Valdez spill. We can argue about the numbers, but they are staggering at any level. Now if you don't think this problem is going to impact Sarasota, and communities in the down stream flow of the Gulf Stream, including the eastern US coasts, you must have your head in the sand. Just ask someone from the coastal areas of Louisiana, what life is like now. Was it a bit political, yes. Did I try to make it a bit pointed, yes. Did it make you a little uncomfortable, I hope so. "