A little to close for comfort, ahhh, my retinas, and my pacemaker has stopped worki....

I am uncomfortable with the Garmin radar installation below because of the nearly eye level installation, and the about 6 foot proximity to someone sitting at the helm. If the unit had been mounted lower, I most likely wouldn't have looked at it twice. This photo took me off on some research to verify to myself that this radar installation was either safe, or unsafe. 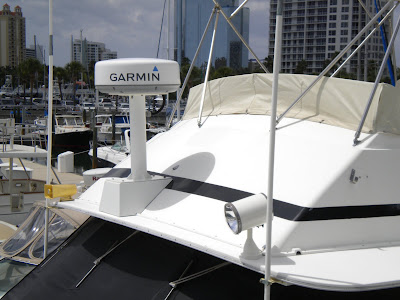 The first thing I looked at was what the manufacturers said about the dangers involved in being to close to the beam of a marine radar. Most of them say about the same thing. For example, Furuno's radar manuals say, "The radar antenna emits electromagnetic radio frequency (RF) energy which can be harmful, particularly to your eyes. Never look directly into the antenna aperture from a close distance while the radar is in operation, or expose yourself to the transmitting antenna at a close distance." It sounds a little ominous doesn't it? It could be really dangerous, or the legal departments of these companies are "showing an abundance of caution", or maybe it's a bit of both.
On the other hand, there is a fair amount of information that says the radiation levels of a rotating pleasure boat marine radar are actually very low, and hence the hazard level is also very low. I parsed my words a bit here, because high powered, non-pleasure boat radars can be dangerous, and the rotation of the array means the radiation exposure is limited to the time the array is facing you.
So after several hours of reading on the subject, this is what I think. It would not be good for you to get as close as possible, at eye level, to an operating radar array, and stare at it for an extended period of time. I also think, that marine radars, that are installed according to the manufacturers installation instructions, will not adversely affect personnel on a boat. Everything in-between these two extremes is somewhat subjective. Will the installation above smite the owner's pacemaker, or blind him? Most likely not. Would I want to sit at the upper helm while the radar was running? Nope, not if I could avoid it.

Murphy's Laws say that if a piece of toast falls off the table, it will land buttered side down. The odds of winning the Florida lottery are about 23,000,000 to 1. I wonder what the odds would be that a radar could malfunction, and have the array stop while pointing at the owner, and still be transmitting? This would be a long shot, is it possible?
Ben Ellison's Panbo link below has an excellent discussion on this subject, by many more knowledgeable than I, and is a good place to start learning more about this subject.
Panbo discussion about radar safety
Posted by Bill Bishop - Parmain at 1:33 PM 4 comments: