The boat is a zinc'er

The boat is eating itself alive. It's almost like it has a case of aluminum flesh eating bacteria. Purchased about a year ago, the owner had this 1999 cuddy cabin single outboard sent in for a new bottom job, and it was then was moved to the owners slip. A few months later, the owner's diver noted that the engine zincs needed to be replaced, and they were. A few months later, again the engine zincs need replacement, and they were again. About six months into ownership, a motor tilt hydraulic cylinder failed, and the boat went into a local marina for repair, and it was discovered that the motor mount was severely corroded, including chewing a hole through the lift cylinder housing, causing the failure. The owner was understandingly concerned, and he should have been. 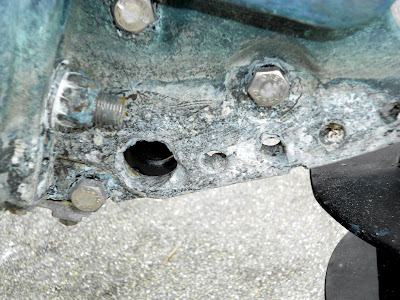