Boat, you're under arrest. Put your lines behind your stern so we can cuff you

From little acorns, Supreme Court cases grow. This whole escapade starts with Fane Lozman. He suspected Riveria Beach city officials were illegally conspiring to sell the city owned marina his houseboat resided in to private developers. In a fit of civic pique Mr. Lozman sued the city. The proposed redevelopment program later fell through, but the city was irked over the suit, and took action.

Catching Mr. Lozman in the act of walking his small dachshund, gasp, unmuzzled on marina property, and claiming he was using unlicensed workmen on his boat the city attempted to evict him. Mr. Lozman again sued the city, and prevailed. The city was found to have retaliated against him. But the city wasn't through with Mr. Lozman yet. They adopted new marina regulations that included the requirement that all vessels had to be able to move in the event of a hurricane, be registered as a boat, and have insurance.

In part Mr. Lozman couldn't comply with some of the new regulations. His houseboat didn't have a HIN number, so it couldn't be registered. The new regulations also implied you had to have a motor, which he didn't have, and I suspect at this point he just didn't want to. Notices sent Mr. Lozman, were ignored, and then on a fateful day the city used Admiralty law with a federal warrant to arrest the boat. And yes you can arrest a boat. It gets towed away, and is later sold at auction. The city actually buys it back, tries to sell it, so they claim, and later has it destroyed. This will show that meddler you don't mess with city hall, and now the case is being heard by the Supreme Court. Is it a boat, or not? That is the question. 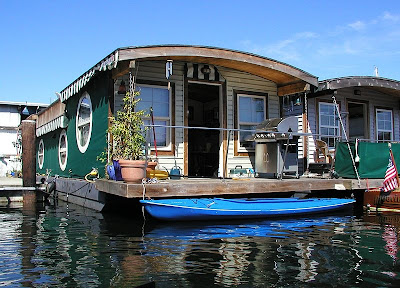 Read more »
Posted by Bill Bishop - Parmain at 8:56 AM No comments: