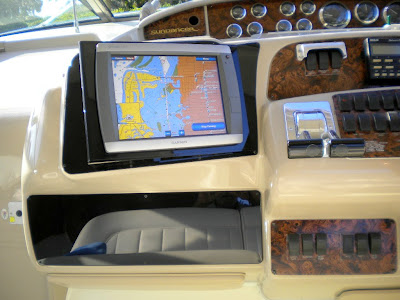 This was a fun, and satisfying project. The owners are Kevin and Michelle, and they have taken excellent care of their ten year old Searay. The biggest challenge here was to relocate the original nine switch panel to two new locations. Three of the switches were moved to the upper instrument panel along with the cover that protects the engine start/stop switches from accidentally being actuated, The rest of the switches were mounted in the burl panel on the lower right side of the photo. The switch labels were lit from behind with the older flexible lighting strips. The trick was to cut out the the three banks, of three switches from the original panel, keeping the back lit nomenclature intact under the switches. The wiring harness had to be relocated, and stretched in some places. The three now smaller switch panels were epoxied into place in the new locations, and the back lighting strips were taped into place.

Two panels were fabricated from black 1/4" acrylic, and covered the upper and lower locations where the old Furuno, and switch panel were. The new Garmin 5212 was mounted in a black acrylic wedge, which in turn was mounted to the new upper panel. As I have mentioned before, flat panel displays must be viewed nearly head on for the best results. The wedge tipped the new Garmin 5212 about 20 degrees toward the helm station. Had this not been done, the display would have been difficult to be seen from the helm. This problem also existed with the original Furuno display which was mounted flat in the original location. As a note, the original space provided for the Furuno was at a bad angle, and was to far from the helm. Marketing must have designed this helm.

This type of project does not happen quickly. Equipment must be removed, templates made, and panels fabricated, wiring modified, glue has to dry, and new equipment installed. This project took about twelve man hours, spread over a week.

The black panels worked out well, and match the black plastics used elsewhere on the console. I was very pleased with the appearance of the console when it was finished. The fabrication of the acrylic panels, and the mounting wedge for the Garmin 5212 was done by Delcraft Acrylics in Sarasota. Bob Blanchette takes my templates, and turns them into highly polished works of art. Delcraft Acrylics phone number is 941-379-4037, or they can be contacted at http://www.delcraftacrylics.com/.  In the end the project was tres bon.

Posted by Bill Bishop - Parmain at 9:21 AM No comments: