To tape or not to tape, that is the question. A goo vs tape analysis.

I was asked to make a service call to replace a field diagnosed problem with a Garmin auto pilot shadow drive. The shadow drive is unique to Garmin's autopilots, and its job is to detect that the helmsman has taken control of the vessel by detecting movement of the helm. When it senses helm movement, it immediately disengages the autopilot, and gives full control to the helmsman to do some task like steering around a lobster trap buoy. After a couple of seconds with no helm movement, the auto pilot will request permission to re-engage, and place the vessel back on course. It is both clever, and easy to use.

The initial problem report was that a hydraulic pipe fitting had been screwed into the end of the shadow drive so tightly, that it had damaged the sensor's wire where it passed out of the brass case, and it sure looked that way when I first saw it. The fittings that screw into each end of the shadow drive are 1/4" NPT standard pipe fittings, and are often used in hydraulic steering systems. Armed with a lot of rags, and some wrenches, I try to unscrew the fittings but criminy, the fittings aren't moving. So back to the truck I go for some bigger wrenches, and with more effort than I would have ever thought I would have needed, they finally unscrewed out. 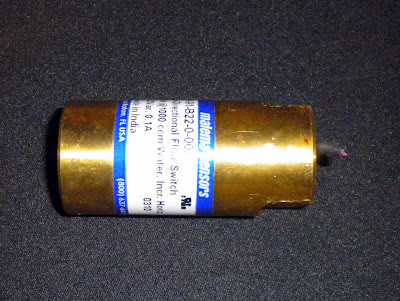 I finally free the little beastie, and staring down inside the shadow drive, I find a wad of Teflon tape inside. This is the real culprit. Your boats steering system does not like any foreign materials that will find its way into check valves, ports, steering pump parts or the ilk, and this wad of tape was a problem. After examining all of the evidence at hand, I was able to logically determine that this problem must have been caused by a "Roid Raged" professional weight lifter, with a serious teflon tape fetish issue. I know this because even the Mercury hose fittings, that do not need tape or sealers at all, had tape on them. In a few minutes the new shadow drive was installed, and the system works now perfectly. 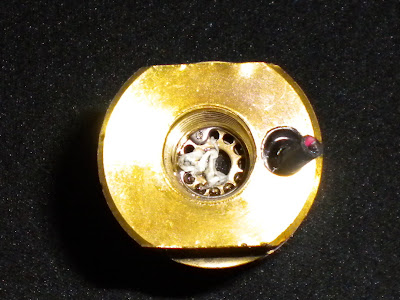 I have mixed feelings about hydraulic pipe thread sealing systems. They do two jobs, the first of which, and most importantly, is to lubricate the threads, allowing the fittings to screw down further, and the second job is to provide a seal for any spots where fluid can escape. In theory, and it is theory, perfectly machined NPT pipe threads on both parts will not leak, if they are tightly enough screwed together. The reality is that these parts, although closely machined, are often not perfectly machined, and handling, shipping, and other abuses in your hardware store, vendor shelves, and bouncing around in my truck all contribute to nicks, and flaws that can allow fluid at a 1000 psi to sneak through, and so these materials are sealants also. Lets now take a look at some of the options.

Ladies, and gentlemen, in the far corner, weighing in at next to nothing is Teflon Tape. He's pretty, snowy white, the reigning champion, and ready to fight. 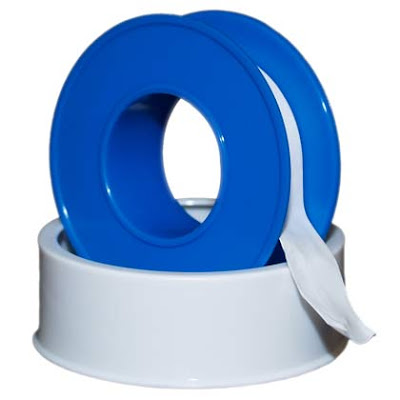 In the other corner, also weighing in at nearly nothing is TFE Goo. He's messy, not pretty, but has a long record of knock outs. Lets make it a clean fight, especially you Goo. 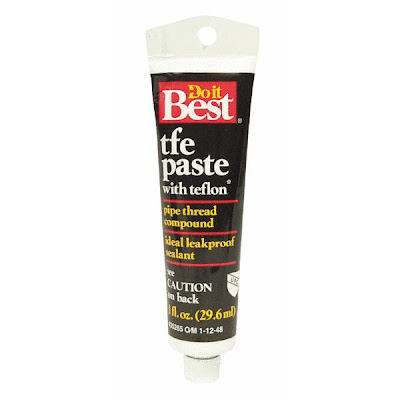 We are now off to the very top secret Parmain laboratory to do some empirical analysis of the sealing options. 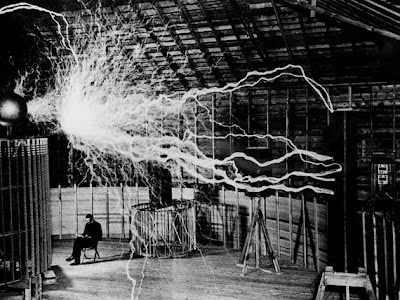 Below is an example of the culprit that mucked up our Garmin shadow drive sensor, and an example of how not to apply teflon tape to pipe threads. When the tape is applied below the starting threads, the threads can cut off the lower tape, and allow it to enter the hydraulic system. 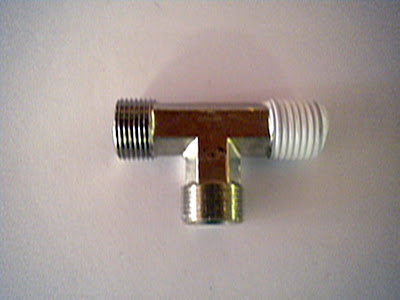 I screwed that fitting in, and then screwed it out, and you can clearly see what happened. The threads did cut off the excess tape, which will migrate into the hydraulic system, mucking things up, as it did in the shadow drive. 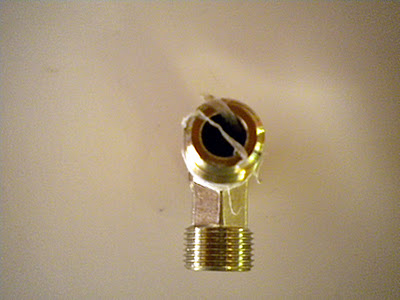 If you use teflon tape, this is what it should look like. You must keep the tape clear of the lower threads. When this fitting was screwed in, and then screwed out, it came out cleanly, with no tape left behind. 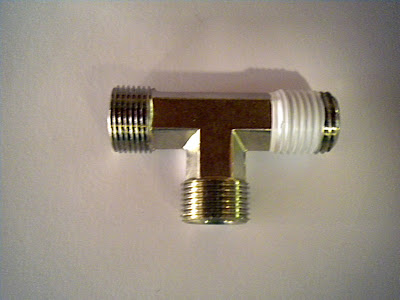 Using the goo, you can actually encounter the same problems you have with teflon tape  By getting goo down on the lower threads, the same thing happens. The goo ends up on top of the fitting, allowing it to also get into the hydraulic system with the same ill effects. I did overplay the amount of goo used to illustrate the point, but it is not easy to apply it from the tube directly. 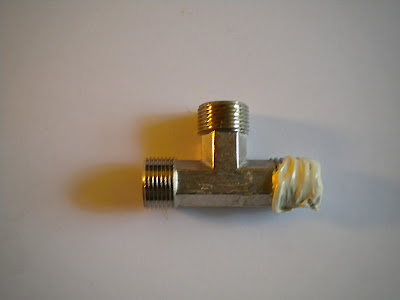 Below is the a picture of that same fitting screwed in, and then backed out, and you can see the excess goo hanging off the end of the fitting. 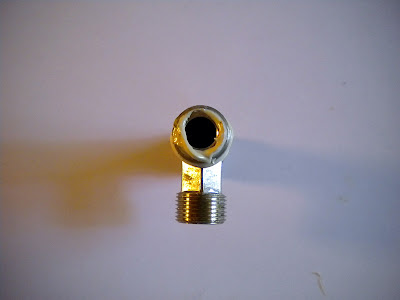 I mentioned in the beginning, that I have mixed emotions about all of these sealing products. They all have some pluses and minuses, and there is a huge number of products to chose from. They all have one thing in common, and that is proper application techniques.

I'm not a fan of TFE paste. Yes it works well when properly used, but it can be messy. The products sold in tubes are hard to apply on the small fittings you see above, and many of them need some curing time to become truly effective. The second problem I have with the pastes, is despite the claims of many that they don't harden, they do. I know this because when I install an autopilot on a ten year old boat, that has been baking in the Florida sun, I have to often unscrew the 90 degree fittings off of the back of the helm pump, and replace them with tees. The TFE paste is often very hard, and brittle, and little chunks break free, and can fall into the helm pump if you are not very careful. The products that come in the cans with a brush, have brushes that are designed for larger household plumbing pipes, so you often need a smaller brush to apply it.

Truth be told, I would rather use teflon tape, than TFE paste anytime. Properly applied it works well, it isn't messy, but I suspect that companies like Teleflex have a long history of dealing with poorly applied teflon tape, and less issues overall with the paste products, and that is why they recommend that or other products. There are a couple of liabilities with the tape. You must wrap it in the right direction (looking at the fitting with threads down, you go counter clockwise), and you have a high probability of leaks, if you back the fitting off, even a little bit during installation.

Nothing is perfect in life, and often we have more options than we would like. It would be nice if there was only one solution available. We could grumble about it, but couldn't do anything about it, but this is not the case. Below is my current favorite. It is a purple colored liquid, and has a thin nozzle applicator, that makes it easier to apply to smaller fittings. Loctite makes many products that are similar, but avoid the products that are also thread lockers, if you ever want to get that part back off in a dark very cramped place. This product, although it works very well, also has a tenacious death grip on the threads, and under some scenarios you may need a heat gun to expedite removal. If I run out of it, I always have the tape (sorry Marc).

TFE Goo did win the fight, and Teflon Tape is still trying to wash it all off in the shower. 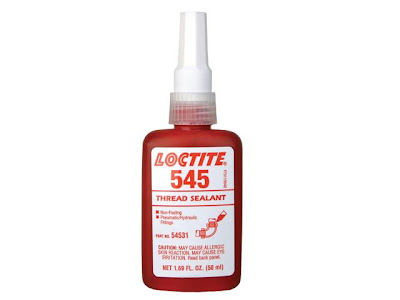 If you have any better suggestions, edify all us with the comment box below.

I couldn't resist using the interesting laboratory picture, and I was not telling you the truth. It isn't my lab at all. The lab actually belongs to Mr. Tesla, and he is sitting in the chair. I won't do this to you again ever. Well mostly never, I might even keep using teflon tape, maybe....
Posted by Bill Bishop - Parmain at 10:05 AM 3 comments: