The headline is meant to say, that even if you're smart, sometimes you just don't always have good tools to definitively say, this is what's wrong. As a case in point, I often get cases of "no depth is showing on my what ever device".  So this is where playing the odds comes in. If you call the sounder tech support group, they always tell me two things. The first is try another transducer, to which I say " I don't have one of every transducer laying around, so what's plan B. The tech says, "well I don't know, because it is usually the transducer, and not our equipment". I say thanks, and hang up. What I don't do is call Airmar to see what they think, because it is a very rare occasion the transducer is bad. So the solution to the problem is to rip the sounder/module out and ship it in for repair. Lo and behold, ten days later the unit is back, I plug it in, the system works, and it's another Christmas miracle. The real problem is that without some expensive, and exotic equipment, or a box full of transducers, there is no real way to tell which is DOA. You use your instinct, and experience to find the least costly solution for the client.
Sometimes, but not often, the wrathful odds gods do not favor you. That's me below, starting off on what turned out to be about three hours in the dreaded bosun's chair. I wish there was a more comfortable admirals chair. This starts with a radar which had worked for five and a half years, suddenly ceasing to work (scanner not responding). This message tells me we have a failure to communicate going on. Now who is not talking to whom? Is the radar not talking? Is the display not listening, or is the cable bad? My sense of the odds here are that the radar dome is the most likely suspect (it lives outside), followed by the display, and then the cable.
So up the mast I go assisted by the owner, his broker, and some other local club members helping, and watching the show. I pop the dome cover, and it is clean as whistle inside. I check the power, and it is good. I pull the data connector and it is also fine. My assistant was off on another job, so I didn't have the capability to wring out the cable on the spot with the available crew. Besides the cable had been fine for five and a half years, and there was no evidence of damage, or splices in the cable. So I decide to pull the dome, and ship it for repair.
The radar is a big package, and I ship it ground to save some bucks. A few days later, the boat sells, and now everybody wants it done yesterday. I instruct the vendor that we will pay a $50.00 expediting fee, and in a couple of days I get a call from the tech saying there is no problem with the dome.  Shoot, so I toss the dice and send the display in to be checked out with the dome. The tech calls back, and tells me "so sad, too bad" they're both good. So like Sherlock Holmes says" When everything else has been eliminated, what's left, however unlikely, is what it must be". 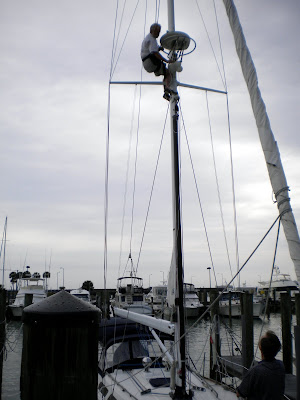 Before I'm chided for not checking the cable, I want to point out, in my opinion, that it takes three people at the minimum to go up the mast. My butt in the chair is one, somebody manages the winch, and a third to handle the safety line. It's cheaper to send the module off, and have it checked. If the module was bad, job done, if not, it's the cable. So on a dreary Sunday morning, a crew of four assembles. I go up the mast, and attach the pull line, and the cable comes out, and a new cable is pulled in. The dome goes back on, the display is re-installed, and it all works. While we are there, a spreader bulb is replaced, and I get a good view of the marina from the top of the mast while I straighten out a windex.
Well, as you have now surmised, it was the cable. In the picture below you can see a series of cuts, caused by the conduit pipe at the bottom of the mast. Who ever installed it, got a little rough on the haul up. Given the depth of the cuts, and the amount of exposed copper, I'm amazed it worked at all, much less for over five years. Most of the time, I can tell you exactly what's wrong, but sometimes you just have to roll the dice."Are you feeling lucky today?" 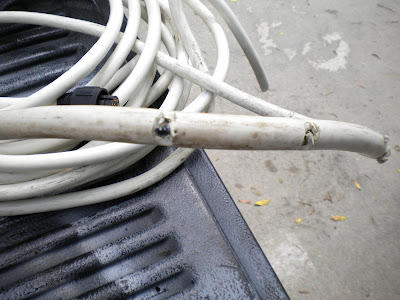 Posted by Bill Bishop - Parmain at 8:48 AM No comments: