A Searay before and after. Beauty is skin deep. 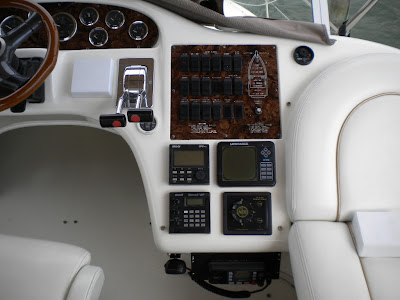 This was a satisfying project. In the panel above was a dead B&G Quad VHF, GPS, and a Lowrance X75 depth sounder. Under the panel, was the VHF radio encased in a 1/2" black starboard wedge structure, that was made of pieces that looked like they were chewed out by beavers. This was also a lousy location for the radio. You couldn't see the VHF's screen from the helm, with out cricking your neck. The first operation was to remove the non-functioning gear stat, leaving a bunch of holes in the dash. A new overlay panel was made, matching the the width of the panel above Another panel was was made to cover the hole left by the VHF radio. The boat had a nice Furuno Navnet system with radar, but it was not interfaced to the surviving B&G autopilot. The remaining B&G gear (Pilot and Depth) was reconfigured, and the Furuno Navnet system was interfaced to the auto pilot. An Ipod and Sirius cradle interfaces were also added to the vessel (See the below article). 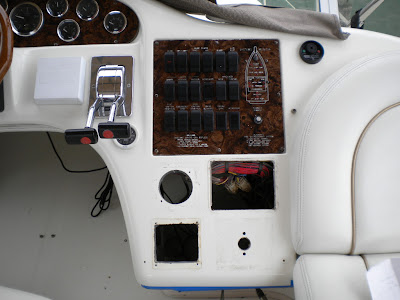 The vessel now looks much better, and has lost some weight. The ACR controls were remounted in the new panel, along with the VHF radio. As a last note, never hire beavers to work on your boat. They work hard, and cheaply, but everything looks a bit gnawed on. 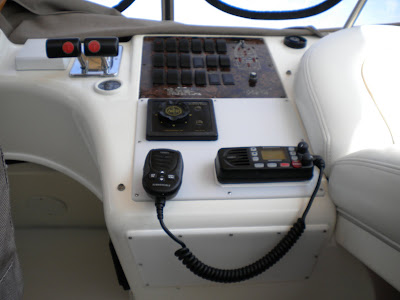 Posted by Bill Bishop - Parmain at 4:19 PM No comments:

O Aux, O Aux, wherefore art thou Aux? Creating a radio auxiliary input for your stereo, when there isn't one. A DYI project.

The giddy bob above is one of my favorite problem solvers. The desired source of music for many owners is their Ipod, or Sirius and XM receivers. The problem is integrating them into an existing stereo system of a boat. Many vessel's stereos do not have an available auxiliary input available to use, and hence the Scosche solution (Don't ask me how to pronounce it!). This device is an FM modulator, and takes an audio input, and squirts the audio source directly into the radio via the antenna wire. This works much better than the wireless versions, and is much less prone to electrical interference. The little gray box can be set to several lower FM frequencies, and the sound fidelity is excellent. In this case, the wiring diagram below (click it for a better printable view) shows a satellite radio car kit system, and an Ipod both connected to the Scosche input. The caveat here is you can't play them both at the same time. I take that back, you can, but you will just hear both audio sources at the same time, and I suspect that this would be annoying, at least to me. But maybe "Mashers" could give it a try, and let me know what it sounds like. If your just doing a single device, you can use the little Ipod interface plug that comes with the unit. 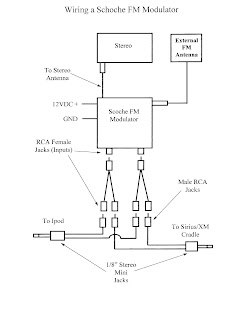 The Scosche modulator can get its power from the radio's power circuit (red wire, not yellow). It uses very little current. You unplug the radio's antenna wire, and plug it into the Schoche's female antenna connector. You then take the Scosche's male antenna connector, and plug it into the radio. Yep, the antenna still works as well as it ever did before.
Now what's left is to attach the new inputs. in the drawing, I show a splitter going into each L/R input. This is a single male RCA end, with two RCA females at the other end. This allows you to hook up two inputs to the Scosche box. Connected to the two pigtails are two cables, each with two RCA male connectors at one end, and an 1/8" mini jack at the other end, that allows connection to the Ipod, and or a Siruis/XM cradle. Pick a frequency on the box, set the radio to that frequency, plug in the Ipod, and you have tunes.
For satellite radio, I often use a car kit that allows owners to move the units from the car, to the boat. These car kits come with a non-marine antenna, 12VDC plug, cradle, and a cassette tape adapter. They sell for about $30.00. I throw away the cassette adapter thingy. I can usually find a hidden place inside to mount the antenna, and I glue it down with silcone, or similar non-3M 5200 goo. I purchase a 12VDC receptacle, and plug in the power adapter, and give it a couple of wraps with tape to keep it from shaking out. This can also be tied to the radio's power source (red wire, not yellow). A little note about the car style plugs for Ipods, and car kits. They transform  the 12VDC voltage to a lower level. If you cut the plug off, and wire it directly to 12VDC, you will cook your 4 gigabyte Ipod. 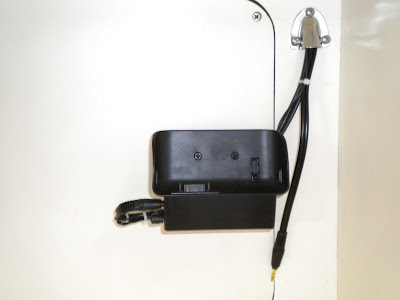 Above is a typical install of a Sirius cradle, and a plug for the Ipod (there is an adapter cable for the Ipod that is not shown). Here is the link for the Scosche modulator below, and the cables can be purchased at Radio Shack or equal. Happy tunes to you.  http://www.scosche.com/products/sfID1/151/sfID2/159/sfID3/351/productID/417
Posted by Bill Bishop - Parmain at 3:21 PM No comments: