UFO's and J boats at the same time.

There is a reason RIBs (Ridged Inflatable Boats) are favored by search and rescue organisations. Fast draining, lots of flotation, lightweight, and can handle low impact collisions with no problems. But look at this elegant version of the sturdy RIB. Add beautiful lines, a carbon fiber hull, and lots of amenities and you have a UFO 69. The one you are looking at is the only one in the US, so I am thinking not a lot of people have seen this vessel. RIB pleasure craft have been popular in Europe for a long time because of the fuel savings, and this sleek vessel should alter your perspective of an RIB being more than a stodgy, and wet, hard riding dingy. 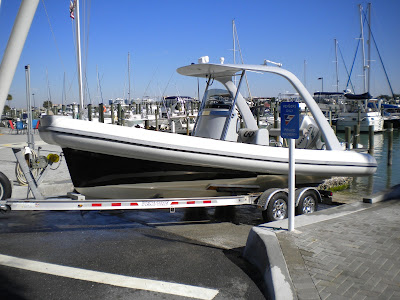 This UFO 69 (23') is commodious, and packed with lots of nice features. A Garmin 4208 chart plotter, and sounder module, ICOM VHF, lots of seating, and real teak decks. Add to this a thumping Fusion stereo with bazooka sub-woofer, refrigerator, blue OceanLED underwater lights, and there is even a wakeboard hook. In sum, it's both a terrific fishing platform, and an elegant day cruiser all in one. It looks fast sitting still, cruises at 35mph, and has a top end of 53mph, and this is all done with a single Honda 225hp 4 stroke. With the speed of twin engines, coupled with the fuel economy of a single engine, it's no wonder why they are so popular in Europe. 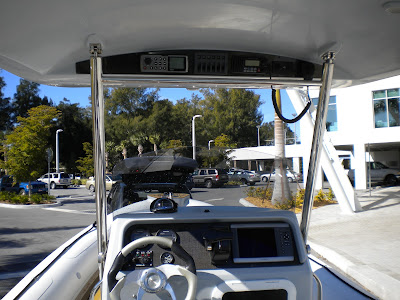 The aft of the boat has an open transom for quick draining, and a telescoping swim ladder is under the port side of the transom. If you look closely, you can see the fresh water shower system also on the port side. 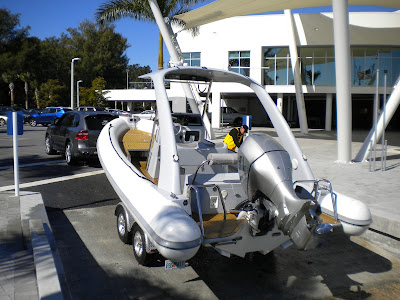 The hull is carbon fiber epoxy with  a tunnel, and there are two steps built into it. If you look at the first picture at the top, what appears to be black on the hull is actually clear coated carbon fiber. Gorgeous to the eye, but very hard for me to get a decent picture of. 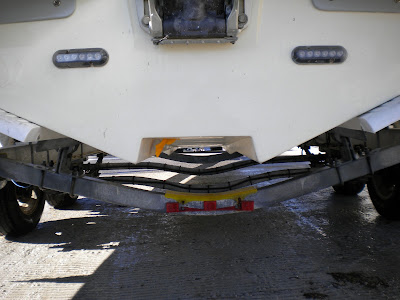 This is a picture of a hull in fabrication, I lifted from UFO Boat's website showing the tunnel and the steps formed into the hull. 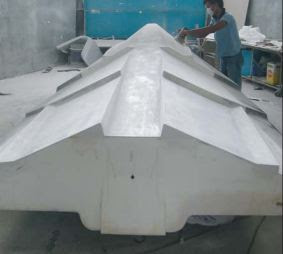 There is yet another cool feature to talk about. Mounted under the helm seat is an inflation, and deflation system. The vessel has a beam of 10' 5", and in Florida, the maximum trailer-able width without a permit is 8' 5". 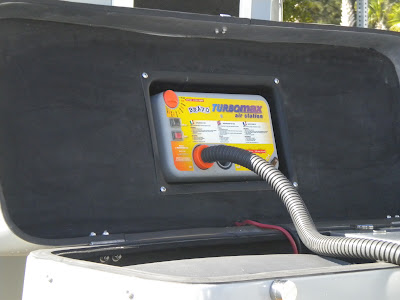 With a wide 10' 5" beam, the answer to this transport problem is you deflate the tubes with the vacuum system, and in just a couple of minutes they are sucked into the hull, and you're now legal to haul it on a trailer 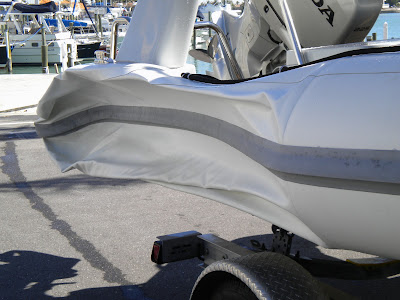 All in all, I was most impressed, and I'm not easily impressed. Sleek, safe, fast, fuel efficient, loaded with toys, and a sticker price of about $100K. I know it sounds stiff, but compare it with the price of a new Boston Whaler of about the same length, and it looks very good to me. 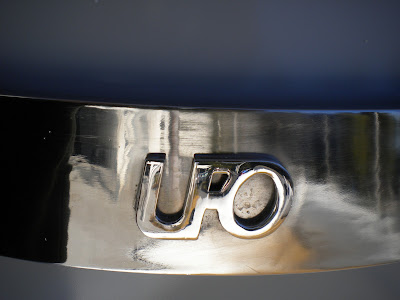 Now for part two of the story. What would be the odds of finding two shiny new boats I had never seen, at the same place and time, with a full camera battery? This is hull #1 of J boat's new J/108 shoal draft cruiser line, although I kind of hate to call it a "Cruiser", because it screams performance to my eye. The cockpit is large, with an open transom, and it's set up for single handing, including raising, and lowering the centerboard. 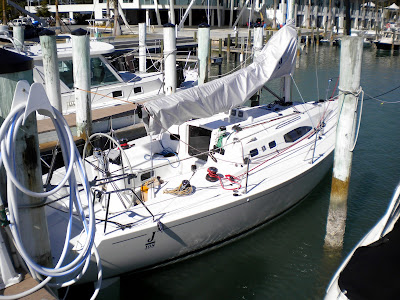 The first thing that jumps out at you is the twin rudder set up that not only allows you to turn on a dime, and give you back nine cents change, but also allows you to gracefully back down into a slip, without all the cursing, and frantic gyrations I have always been used to. To be honest, any attempt to back down my sailboat generally resulted in a frantic abort, and stuffing it into dock bow first. I'm envious. 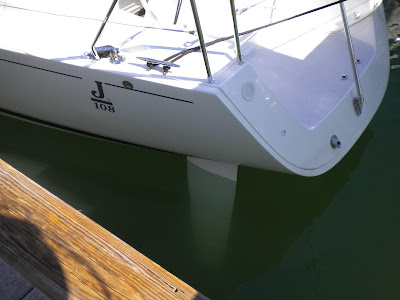 The very J boat bow features a fixed sprit that will accommodate a second furling headsail, an integrated bow roller system, and anchor winch. Another detail I like about this craft is that there is something to really hang onto if you have to go forward to the bow, while things are rocking and rolling. 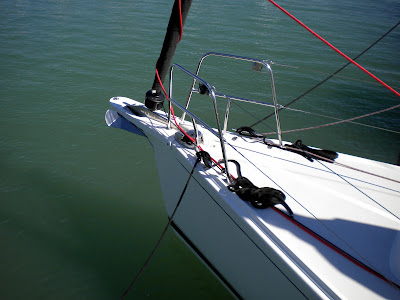 Despite it's purposeful J boat lines, it really is a very comfortable, full feature cruiser with clean interior lines. It sports a large salon cabin with good headroom, large forward V-berth, and lots of teak trim. 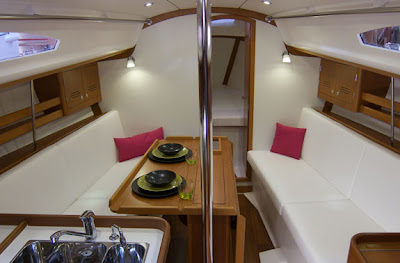 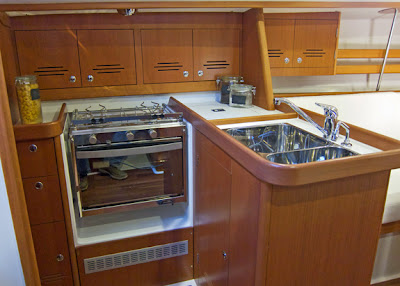 A real navigation station (something that is now missing from so many boats today), and complete head round out the interior. Lots of ambient lighting, and light colors makes it a pleasant environment to be in. 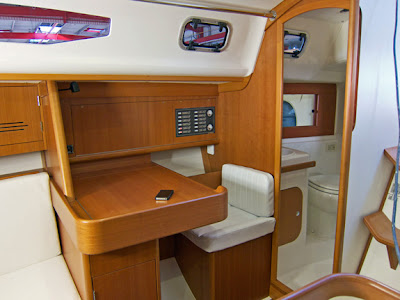 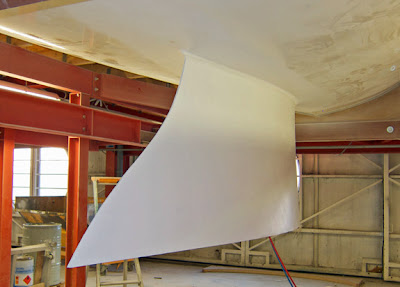 So in the end, this is both a comfortable cruiser, and a true performance sailboat in one package. It is also a striking, and beautiful vessel to boot. It was like Christmas. Two unique vessels stumbled upon on the same day. Both of these boats were leaving for Key West last week, for "Race Week", and were being shown off at the Galleon. And many thanks to Craig Crossley for letting me take the pictures, he was in a hurry, and took the time to indulge me.
You can learn more about the UFO 69, and the J/108 at Cross Current Marine
The interior photos of the J/108 are from the Jboats website
The photo of the UFO 69 hull is from UFO Boats. Your browser should be able to translate it.
Posted by Bill Bishop - Parmain at 11:06 AM No comments: