"I'm not a big fan of having PC's on a boat, for a variety of good reasons." Now before the devotees of PC's take great umbrage at this, I am going to put lap tops in the "I'm a PC, but a different type of  PC", and cut their users some slack.

So for starters, what could go wrong with a Windows based computer on your boat? Everything!. PC's have eaten thousands of pages of my work over the years, and I can barely keep the one on my desk consistently operating. And now you want it to perform in a marine environment, and as the primary source for the vessel navigation? Blue screens of death, frozen pages, and resets, are all things PC users have had to live with throughout the years. As we know from the ad's, "The new Windows Series 14 takes care of all of the problems the old unlucky Windows Series 13 had."

I'm going to keep this dialog in the real world, and I'm framing it around a real system. You can see below, a real boat, and one of two helm stations. On the left, is a Furuno NavNet black box system, and on the right is a PC based system running a Nobeltec VNS Max Pro based system. I like the Nobletec software, but this isn't really about them, it's the PC thats being discussed. 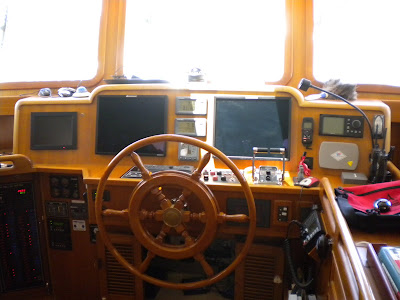 When I first saw the boat, that cute little computer below was running the PC show. It looked like a porcupine. Every orifice in this little box had something plugged into it, all largely unlabeled. It was surrounded by two white plastic 110VAC fans to keep it cool, and it needed the cooling. When you stuck your head into the underside of the console, it felt like you were in a Hasbro Easy Bake Oven. I mentioned the cooling issue to the owner, and suggested something needs to be done about this. 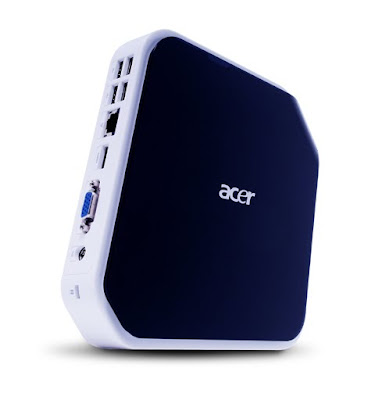 Unbeknownst to me, the owner called the original installer, and discussed the problem with him. The installer suggested that a new computer could be rigged up, and with a case that had some substantial cooling capability. This was a good idea, at least for the PC processor. The original installer even loaded the Nobeltec software and charts into the system, and shipped it to the owner. Another installer was given the task of installing the new computer. He came in, pulled all of the USB plugs out of the cute little computer, and plugged it into the new one, (you can see it lurking at me below), and pronounced it "Job Done", got his money and left. 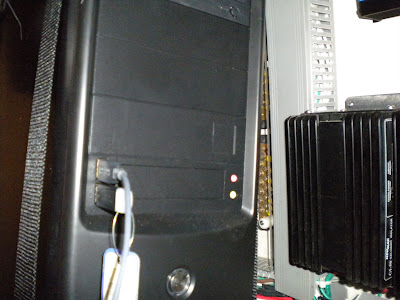 This is where my decent into PC purgatory begins. The cute little computer had other things stored in its system, and it was now a little short of peripherals, so getting its additional software contents is no longer easy. What's missing? We can start with a pile of drivers, the Airmar WeatherCaster, and WX Works weather software for starters.
Lets take a look under the hood, and see what kind of stuff we have there. Starting from left to right is a Sea Level four port serial to USB converter, and thankfully labeled. Plugged into it is the Insight sounder, Insight radar, GPS, and  heading sensor. The Sea Level box is connected to the silver USB hub box, along with the Airmar weather station, and a couple of additional USB to serial converters. The silver hub plugs into a USB slot on the new PC. There is also a Syrens WiFi system, connected to one of two wireless routers, and the other wireless router is used by a laptop to access the Nobeltec glass cockpit option. A display splitter, an Actisense NMEA multiplexer, three GPS's in, and a dozen other assorted black boxes are there also. I could feel the very life being sucked right out of me when I first saw this. So what could go wrong here? Don't worry, I'm gonna tell you. 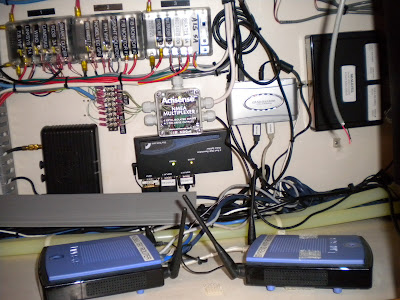 This is a brief list of the bugs encountered. I downloaded, and reinstalled the Airmar software, and it searched for its own port, and didn't find it, or I should say it found one that had GPS data on it, but oops, the wrong port. A call to the ever gracious Irene Robb from Airmar helped me out here. The Airmar software was finding the GPS port first, and thought it was the correct port, because it was hearing things it was expecting to hear. The software had to be manually set to the correct port, which was actually further down the list.
This system has the longest list of com ports I have ever encountered, and the thing about com ports is that you can't give them a real name, Like GPS #1. So a lot of the identification of what port is being used by what device is done by trial and error. Pull a plug, and see what disappears off the Device Manager's port list. OK, now we know that com port 5 is a GPS, and on we go. It took two people to do this chore, because the port list was so long, and the plug puller, couldn't see what disappeared, so someone else had to watch the display. I needed to do this, because in order to re-install the Insight sounder, and other devices, I had to identify which ports they needed to use. The Insight radar also had to be reinstalled, but it was able to find its port by itself.
Since there are so many ports being used for serial data, periodically on start up. The PC sees serial data (and there is a lot of it), and then thinks its seeing a new serial mouse, and because the PC is so clever, it conveniently installs the new non-existent mouse, and changes the port for you. This results in all kinds of erratic cursor motion, menus popping up, and other weird things. The fix for this is to open the console, and start pulling USB plugs until it stops acting up (you can't control the cursor while it is doing this "crazy mouse" serial talk). Then you go to the Device Manager, and disable the newly, and automatically installed "Serial Mouse" it thinks it sees, and plug the offending cable back in. You just hope it won't do it again, but history has often proved otherwise.

The original computer, was an XT machine, and the owners lap top was XT based. Nobeltec's "Glass Cockpit" ran on the wireless network. Now the owner has a Windows 7 lap top, and the new PC for the console is an XT. Nobeltec's "Glass Cockpit" system requires that the computers have exactly the same operating system for this feature to work. Mr Gates has insured, that with each upward change in Windows, software compatibility goes away, and so did this feature. There may be a way to do this, but it will no doubt require more iron, and software, and some Googling to find out.

Power is always a concern with a 110VAC based system. if your generator, or inverter fails, so does the PC based navigation system, and everything with it. Switching over from shore to ship based power systems must be done with care, and you have to be careful about encountering bad shore power systems. Your PC will not like it. Cooling is very important, and you should have a firm grasp of PC operating systems if things go wrong, and you have to diagnose what's wrong. Last but not least, there are way too many single point failures that can completely render the system useless. A hub goes down, a USB plug vibrates out, and you are up the creek, without a PC.

So if you need to have a PC based system, here is some advice. Keep it as simple as possible. When the PC is your, navigation system, internet access, weather station, XM weather source, and hosting a ton of NMEA serial data ports, things can, and will go awry, and figuring out what ended up in left field can be challenging. If you want a navigation system, keep it just a navigation system, that is just standing alone, and less is always more reliable.

So now it's time for the lap top uses. All of the above paragraph still stands for you also, but having said that, the lap top offers tremendous bang for the navigation buck. A $40 USB GPS, free software from SeaClear, and free charts from NOAA, turns your lap top into an effective, and competent chartplotter, even if you don't get free Sham Wows with your USB GPS order.

The system I have been talking about will end up working OK, but it will never be as reliable, or as stable as the Furuno NavNet system that is right next to it. This was a very smart decision to have it installed, next to the PC.

"I'm a PC, and Windows 13 was my idea." I just wish that angry mob would stop chasing me.

Some quotes from Murphy's laws:


A computer that has been on the market for 6 weeks is still usable as a boat anchor.
The troubleshooting guide contains the answer to every problem except yours.
The attention span of a computer is only as long as its electrical cord.
Standard parts are not.
No part ever fails where you can reach it, or where there is enough light to see how to replace it.
It is simple to make something complex, and complex to make it simple.


There is a fix for crazy mouse, and you can find it here.

Here is a complete listing of all of Murphy's laws.
SeaClear's free navigation software website
Posted by Bill Bishop - Parmain at 10:16 AM 2 comments: