Its moving day, no it's not, we are just marking time.

The rusty meat cleaver repeatedly strikes the bundle of wires until they are completely severed. The tangled mess is then shoved into some fiberglass crevasse. Job done thinks the wire butcher, now what needs my finesse?
When boats ship by truck, they have to be lower than 13' 6" on the trailer to meet most height restrictions. So in this case, a Viking 53" Sport Cruiser was shipping out of Sarasota. Everything had to be removed off of the hardtop, packed, and stowed somewhere on the vessel. On this boat, as you can see below, Jeremy has already removed the Furuno radar, and is starting to pull the bolts for the stainless steel structure. I'm down below, getting ready to catch the stainless steel tower as it tips back, taking some pictures, talking on the phone, and doing other less than important things. There is also a Stratus TV antenna (serving no purpose in life now), Furuno GPS receiver, a pair of electric horns, a Digital Antenna VHF, and a Digital Antenna FM antenna. This is a pretty basic set of gear on this boat. You can also encounter satellite domes of various types and functions, and many other types of antennas, and flag poles. 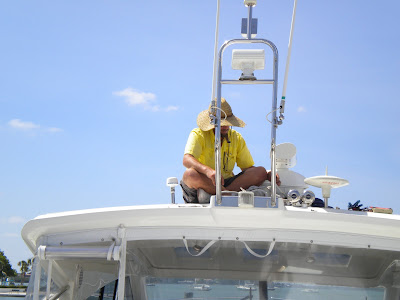 So here is what important to me, having been on the receiving end of many boats that have been shipped, is how much care did the other guy put into the disassembly? Did he leave me notes behind, saying where things were stowed? Was care taken in labeling the wiring, so I don't have to guess what was connected to what? Or did he just have his pet beaver chew the wires apart, and shove them unlabeled into the hole. In the case of this boat, there are two four foot antennas, that appear to be identical. One is the VHF antenna, and the other is an FM antenna, although from their appearance, you can't tell the difference. What ever nomenclature was originally on these antennas, is long gone. So out comes the labels, and in a minute or two, the problem is solved for the next guy. In the picture below, everything has been removed, a clear piece of plastic was used to close the radar mount hole, and the other penetrations have been sealed. 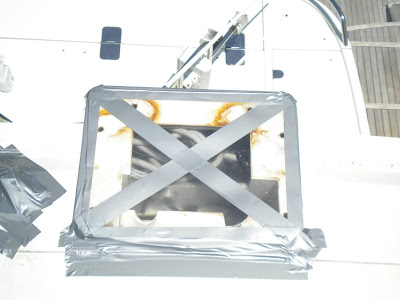 I carry this little Brother label maker with me in the truck. It is inexpensive, doesn't take up much room, and is indispensable. Like printer companies who almost give the hardware away, just so they can sell you the ink, the label maker companies, are really in the business of selling you the labels. Regardless of this, a label costs pennies to make, and can save hours of effort when you are reassembling a tangled wad of wiring. I also use this little machine to label anything on a boat, that I have struggled to identify, so the next time I visit, I won't have to do it again. I love adding something new to a boat years later, and finding that pull string, or label I left in place is still there. I think to myself, "What a good boy I was", at least on that day. 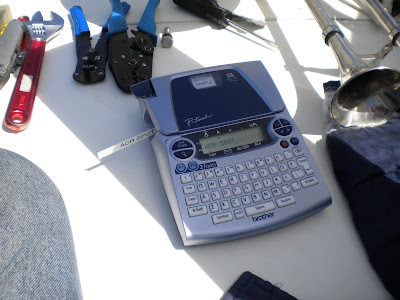 So our job was done for the day. While we were removing the electronics, some colleagues of mine, using wrenches, and socket sets that take two hands to carry, were pulling the props, and stowing them in the engine compartment. The truck pulls up the next day, but there is a problem, the boat is still to high. A new trailer is needed, and the shafts, rudders, and struts have to be removed. Seven hours later, minus lots of difficult to remove running gear, the boat is set on the new trailer, and the tape measure still says it is too high. Gods from afar consult, and command the boat is to be reassembled, and a captain will transport it to its destination. My phone rings, and would we please reassemble the electronics. It took a little over 5 five hours to remove the stuff, and stow it. It took three and a half hours to reassemble, and test the gear. Good thing we labeled all of that colorful spaghetti! I'm not surprised, it's a boat
Posted by Bill Bishop - Parmain at 10:03 AM No comments: