There are two kinds of boat projects. In the first group, the answer is obvious, and the path is clear. Mount the GPS on the hardtop, pull the wire to the console, and connect it. In the second group, the answer is less obvious, and there are many potential paths to completion. If problems are going to occur, it's in group two, especially if completion is time is being pushed. This is particularly true when your'e doing interior remodeling in a boat.
This is Randy, and Vicki's Sea Ray 500 Sundancer, and we have seen a project on this boat before. It is an older, but immaculately kept vessel. The problem was the entertainment systems had become very dated. In the cabinet below, in the right compartment was a glass tube Panasonic TV, in the center section there was a flush mounted DVD player, a Clarion stereo, and below was storage for DVDs. In the left section, two 6 disc CD changers are mounted on shelves. 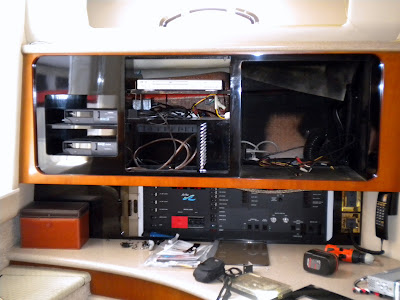 The goal is to remodel the cabinet to allow a new, and much larger flat panel TV to be installed, while keeping the appearance "Factory" built. So this is where the story title comes in. When you first embark on this type of project, it is difficult to instantly have all of the answers at your finger tips. The three of us sit in the cabin, stare at the cabinet, and talk about the art of the possible. Maybe we could pull out the old TV, make a panel that would cover the hole, and mount a new flat panel TV on it, or we could cover the hole, and mount a new TV elsewhere, and so on. This was the most valuable aspect of the project, and out of the iteration, a conceptual approach forms. 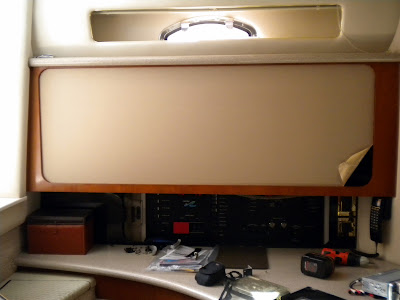 The plan we agreed on, was to make a new panel that will cover the entire face of the cabinet. A very accurate template was made, and a new panel was fabricated by Delcraft Acrylics. In order to get this to work well, the panel had to fit perfectly, and as you can see below, it did. 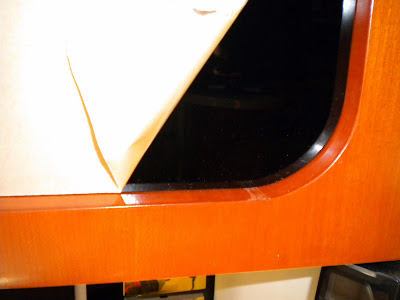 So again, we all sit in the cabin, and talk about what we are going to do. It was decided that we would do a cut out in the panel where the CD changers were located. My first thought was to get a router, and cut out a matching hole, but after some cogitating, I decided it wouldn't end up with the type of finish we wanted, and one small slip of the router, would required a new panel to be fabricated. After thinking about it, I taped some paper over the hole, cut a big X in it, and using a small jewelers screwdriver, I burnished the edges, and the result was a perfect pattern of the hole. 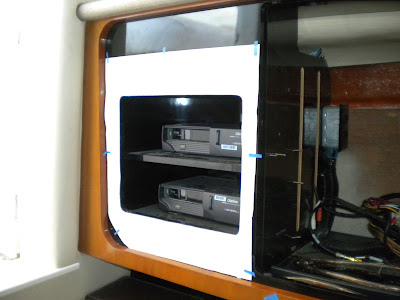 The paper is neatly covered with copious amounts of double faced tape, the panel is pushed back into place, and with some modest banging with my fist, the paper adhered to the panel, and the position of the cutout is exactly where it is supposed to be. Meanwhile, Randy, and Vicki go TV shopping, and armed with the maximum dimensions, they come back with a beautiful 36" Samsung LED TV that is only about an inch thick. 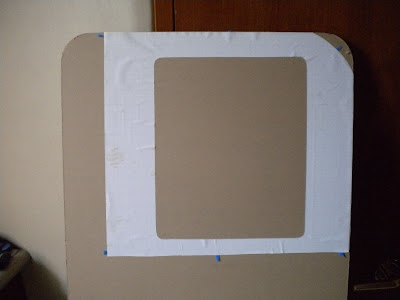 Now for the easy part. Drop the TV onto the panel, center it, and use a Sharpie the trace the edges. The TV frame is square, and about 1 1/2" wide, a new cut out line is made that is 1/2" smaller all around. The panel cut out templates are now done, and off it goes to Delcraft, to have the final cutouts made. 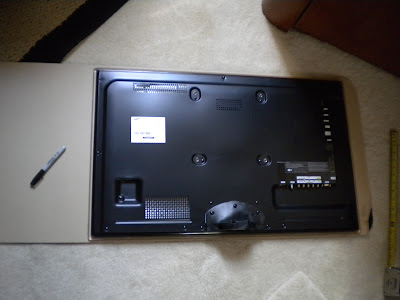 The panel comes back, and a trip is made to Home Depot for some sturdy brackets, and a piece of 2" x 12" wood to attach the mount to. I picked out a mount that would allow the TV to slide from side to side, meaning I only had to get the vertical position correct, and I could easily adjust the side to side reveal. 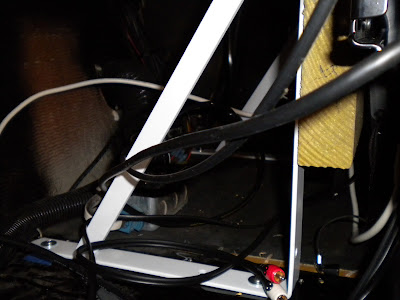 So now it is time to stick the panel in place. The TV is adjusted a little to the right, and some cleat blocks are placed, on the mount to keep it in place, and the panel is pushed into place. 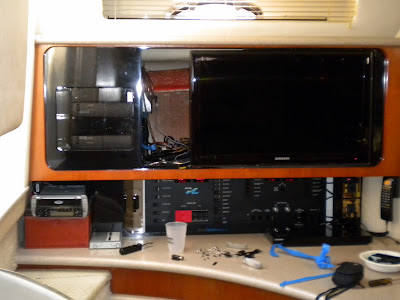 The end result is stunning in appearance. The TV appears to be actually molded into the panel, and the touch controls are just above the frame allowing, by design, access. 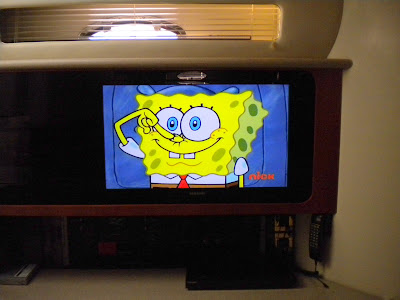 The original smoked glass door is reinstalled in the CD changer compartment, and the end result looks better than the original configuration. 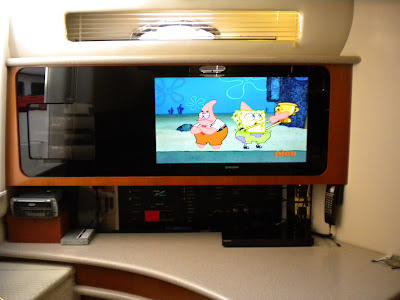 When the TV is turned off, the the whole panel looks like a black mirror, and the very hardest part of the whole project, was in trying to get good pictures. The panel is very much like a mirror, and every picture I took with the flash was awful, and even using ambient light, there were still a lot of reflections. My professional lighting crew must have been on vacation on this day, or I'm not paying them enough to hang around. 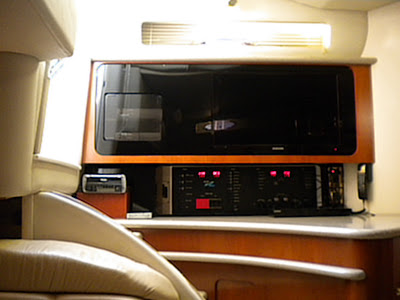 It's still not quite complete. The Clarion stereo is going to be mounted this week into the panel above the CD changer compartment, and the wire harness is ready to go for it. There was no room for the new Blue Ray player, so it will live on the counter, or in its box. The HDMI cable for the Blue Ray player is attached to one of the clips that once held old rope lighting, so it is out of sight under the cabinet when not in use. A very clever wireless surround sound system was installed above the cabinet, hidden under the port hole, and the sub-woofer is stashed under the sofa. New cabling was pulled in from the satellite receiver, to the TV to support an upgrade to HDTV in the future. The panel will get final attachment with countersunk #4 SS flathead screws, with black painted heads, rendering them hard to see.
The real point of this story, is that the end results were terrific, because Randy, and Vicki took their time, were patient, and the ideas were discussed, and iterated many times. Their avid participation, made my job easier, and the end results much better.
The second point to the story, is letting people who are good at what they do, do it. I could have never done the panel fabrication, as well as Delcraft did it. It would have been okay, and by that, I mean it wouldn't have looked like it was chewed out by beavers, but it would not look, or fit as well, as having it done by someone who does this for a living, and has all of the right tools. This is better summed up by a The Hull Truth poster's aphorism, "Find out what you don't do well in life, and then don't do it".
My thanks to SpongeBob, and Patrick for their modeling in the TV pictures, it was as nautical as I could find, at the time. Where are the movies "Mutiny on the Bounty", or "Perfect Storm", when you need them?
Posted by Bill Bishop - Parmain at 9:28 AM 2 comments: