The navigation gear works well, but it's old enough to have been purchased from Ye Olde Marine Electronics Chandlery, and the NMEA interfacing to the new laptop has taken forever. Six weeks alone on and off mucking around with the Actisense/PC interface, only to discover that Window's automatic updates were changing the USB driver when I wasn't looking. It was like gremlins were sneaking in at night, killing the good elves, stealing the shoes they made, and doing their software evil. 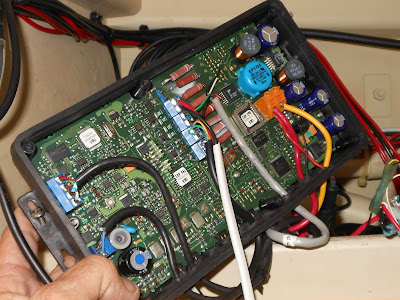 To make things worse tech support didn't know what version of NMEA 0183 the little interface box was speaking, but felt it could have been as antique as NMEA 1.5. This would be the Strom Thurmond version of modern NMEA communications.

However everybody was sure that the autopilot was at least a minimum of version 2.0, and maybe even as high as 2.5. That will work I thought. So two new pairs of wires were painfully dragged from the transom where the autopilot was, to the tiny closet forward next to the nav station.

Out comes the laptop, and PuTTY. The output from the autopilot has its wiring flayed open Ed Gein style, and hooked up to the laptop. I quickly learned with this system not to permanently attach anything to anything until I have verified I have good data. Shoot, dang it. What's this? There is data, but it's mixed with a lot of gibberish. The baud rate is set correctly, but let's change it and see if it could be better at another baud rate setting. Nope its even worse. Okay there is a second output on the autopilot, and I move the wires. Hey that's better we have clean data, but it's just heading data over and over, and over. I stare at the manual, and  find a note that second output provides heading data only. Alright, something is better than nothing.  Heading data is useful, and I'll take it.

Back at the autopilot I take a close look at the inputs and they are both being used. One of them is connected to the interface box, and I'm clueless about the second, and which is which. Maybe one is an old connection from days past, or maybe it's being used for some purpose I can't divine. In either case, I don't want to deal with it unless I have to. I think I need to take another look again at the interface box, antique as it is. 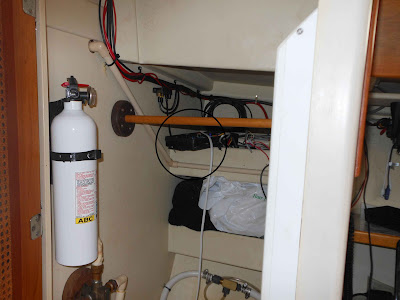 The interface box is located in a small closet next to the nav station. I put a circle around it so you could find it. That's as far as it will move without cutting a million tie wraps. The closet is about 18" wide, so to get at it you put one leg inside the closet, turn sideways, and lean in with a flashlight. 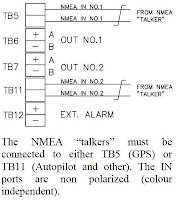 So far, I have succeeded in getting GPS, and now heading data to the laptop. But I still need to get wind, and depth into there, and an output to the autopilot for steering. I do the wind, and depth data first on TB 6. It's clear in the picture. There are A, and B terminals. In theory it will output wind, and depth to the laptop. Wires get hooked up, and it works. Now for the final frontier, the output from the laptop to the input to the autopilot. I look at the book again. TB 5 is non polarized, and colour independent. What is this all about?  How can this be? Could this be a RS-232 port?

Tech support gets called again. I blather on about what's up with this non polarized port business. The tech says in effect "I don't know, and I haven't seen one of these boxes for years. Maybe that's just what it is, and it can figure it out. We only get a few calls a year about this box." I describe the garbled output from the autopilot, and the tech pauses for a moment, and says, "I think I have heard about this somewhere, did you try flipping the wires? Sometimes that works?"

I attach the wires to the non polarized port, and just pretend the top wire is the A+ one, and set up the laptop to send the autopilot messages, and after some setting gyrations with the systems, it all works.

Finally the temporary connections are made permanent. To get wires into the interface box, you have to punch holes in the rubber skirt, and force the wires through. An odious finger stabbing task at best. There is a network connector that also plugs into the bottom of the box that will drop out if someone sneezes on the next dock, and some silicone is applied to make it more secure. Fin, finally.

The point of the story is sometimes it's very difficult and tedious to get things to play together nicely on a boat, and sometimes you can't get them to play at all. The original laptop only had a GPS attached. The new system has the GPS talker feeding both the Actisense, and the Icom VHF, wind, depth, heading data, and the autopilot interface.

In the end it did take three months to get this done. In real world terms about 4 days were invested over that period. Six weeks were lost figuring out the Windows system was changing the Actisense driver when no one was looking, and there was some confusion about what driver should have been used. Since Actisense tech support was by email, it took a day to get an answer to each question, and I had more than a few questions. Each port had to be wrung out, new wiring dragged through the boat, no documentation on the initial installation, and the nav gear was very old. I have known the client for years, and I wanted it to work to the best of my ability. So in the end, and early on I just capped the billing effort at one man day, and worked on it in between other activities. The Simrad and Actisense tech support was excellent, and I'm sure they are both glad this little exercise in antique communications is over, as well as myself.

In the future something major in the original nav system is going to fail, and at the point it will be time to start all over. This time a MDF will be installed at the helm, and everything will be NMEA 2ooo plug and play. I think the Airmar PB200 wind/weather instrument will be a good choice for this gaff rigged ketch, and the existing laptop will become a back up system. The original system will be sent to an an electronics assisted living facility. The one I like the best is the Landfill Happy Acres Resort.
Posted by Bill Bishop - Parmain at 9:01 AM