I really don't enjoy the big three long weekends. Memorial day, the 4th of July and Labor day are in my view the three worst times of the year to go boating. Marinas are packed, boat ramps overwhelmed, and anyplace on the water that has food, liquor and a dock is knee deep in vessels and their alcohol fueled exuberant crews.

These are indeed the quintessential amateur days on the water. My life is made worse by owner's realizations the boat that hasn't moved since the last long weekend holiday now has a variety of ailments. Dead batteries, bilge pumps that don't, electronics that won't turn on and the 12 volt outlet isn't working and this means the daiquiri blender isn't usable. My phone rings endlessly. Some I can help, some I can't, and some I won't. Crikey Bob that thing has been broken for months, and you're calling me at the crack of dark Saturday morning to get it fixed by 10:00 am? Buy a car battery and jumper cables to run the blender. It ain't happening today, Sheesh. 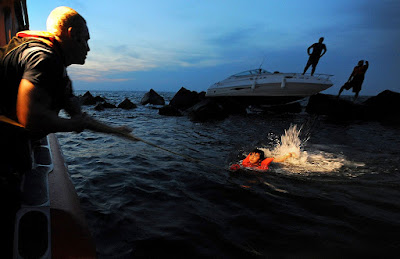 I get most of my news from Google. They don't take any particular stand on anything. They just aggregate news from the web. Here are the first five articles on a subject from the big boys in news biz, and below is a link to all 1327 other news stories on this very subject. You can go through that long list and pick the stories that affirm your view of the world and ignore the rest. Who needs the facts when someone will tell you what you want to hear.

One of the things Google news lets you do is set up custom categories, and one of mine is "Boating". To be honest it's a horror show. Boat explosions, collisions, drownings, propeller deaths, BUI's, sinkings, boaters that haven't figured out dams are dangerous, and water craft that with greater frequency than you would think possible, are smacking into large inanimate fixed objects like bridges, docks, beaches and islands at high speed.

I've selected a handful of headlines from recent news stories. I'll provide a succinct description of the event and in a Murphy's laws sort of way provide a moral. Don't worry, this won't be a bummer of a read. Yeah some injuries, but everyone is alive, at least so far. I left the real carnage on the Google news page for you to read, and there's plenty of it.

This headline caught my eye. The USCG had to rescue out of gas boaters? There must be more to this story and there was. No the boat wasn't being dashed to pieces on the rocks and it wasn't going to plunge over the dam either. As a matter of fact they had already called Sea Tow or the ilk for assistance. All they had to do was sit tight and wait, but they didn't.

Most of the people on board put on life preservers (okay this was in hindsight brilliant) including a young child and went swimming. This would have been okay I guess if the boat had been anchored, but it wasn't. The short story is the boat promptly drifted away and they couldn't swim back to it. The good news was someone on board of the immobile boat used a cell phone to call the USCG who dispatched a helicopter and a 45 footer to recover them all safety.

Moral: If everything seems to be going well on your boat, you have obviously overlooked something. Most likely checking your fuel levels before leaving the dock. BTW don't leave the boat also.

Its been two decades since Sea Scouts have been rescued in San Francisco Bay, and there is a reason for this. My belief is the average Sea Scout is a better boater that most adult boaters. They have a thing called the Sea Promise as follows: As a SEA SCOUT I promise to do my best; to guard against water accidents, to know the location and proper use of the life saving devices on every boat I board, to be prepared to render aid to those in need, to seek to preserve the motto of the sea, women and children first.

Despite all of this a group of 15 sea scouts with an adult were on San Francisco Bay in a 30' catamaran. The winds picked up. There was apparently difficulty with both lowering the sails, and anchoring and they got flipped dumping the entire crew in the water. The were all wearing life preservers, were organized, and everyone stayed with the boat. The USCG quickly recovered them and short of some minor cuts and bruises all ended well.

Moral: Never ever forget mother nature can be a bitch so be prepared like the Sea Scouts were.

All I could think was if there was video of this event it would have gone viral in minutes. The news stories are a little vague about the event details. The Tow Boat US guy who extracted the boat from the woods noted that the first twenty feet of travel from the water into the woods left no marks. This lead to the conclusion the vessel was airborne for that distance, and then it traveled an additional 80 feet into the woods before encountering a significant navigation hazard, a large tree.

How in the world could this happen? I mean it was around midnight, the boat was 17 feet long with a 150HP engine. Hmm I have two scenarios. The first is someone was holding his beer when he said, "Hey, watch this." The second was he was holding his own beer as he plowed into the woods. You just can't make this stuff up.

Moral: The two most abundant things in all the universe are hydrogen and stupidity.

This is a small article about a broken neck and a boat. It does appear the gentleman's neck was broken, I'm sure it hurt, and it's implied there was no permanent damage. There is now a lawsuit. The essence of the suit is the guy was a guest on a boat that went out to a sandbar to anchor and play. The plaintiff says he had never been to a sandbar and the boat owner said it was okay to dive overboard, and he did, into really shallow water and hence the injury.

I have one simple rule about diving into anything. If I don't personally know how deep the water is and what's lurking underneath I don't dive period. This has always seemed to be a prudent approach, to me at least. I have some mixed feelings about this. The first is the immediate water around every sandbar I've been to is shallow. That's not to say that thirty feet further out it might be deeper. The second is my inherent distrust in believing what people tell me is really true, like it's okay to dive here. This is similar to a captain telling me "I don't need a chart, I know these waters like the back of my hand." "Maybe, maybe not and my grip tightens."

Moral: Look before you leap and don't dive. My mother had a lemming's take on this. "Just because someone else jumped off the cliff doesn't make it a good idea for you."

Height matters. The story is simple. A boat is traveling at (conflicting reports) 10mph to 20mph as they attempted to pass under a railroad bridge and didn't successfully pull it off. The bridge objected and the Tee-top was ripped away from the deck causing substantial injuries and helicopter rides for two occupants. I suspect the speed was closer to 20mph because I have repaired boats that have done this at about 7-8mph with a low local bridge. Although the damage was considerable, embarrassment and dented wallets were the only injuries. One of the vessel occupants had suggested the tide had risen and that caused the accident. Seriously?

Moral: A rising tide lifts all boats but never lifts a bridge. Not sure about clearance? Slow down and approach with caution because the bridge always wins.

What is this about? Are the rules different for boaters in NYC and is there some confusion caused by this? I checked and no they are not. It's just a really busy harbor with lots of boats of all types from huge to tiny so you have to pay attention. The story was about a ferry that recently plowed through a group of kayakers while backing out of its dock. No one was killed but but there was plenty of blame to spread around. The ferry captain said the sun was in his eyes, a poor excuse at best, and what the hell were kayakers doing milling around in the path of a ferry, any ferry in the first place? They were like gnats of the boating world waiting to be swatted.


Moral: There are boating rules, and then there are the immutable rules of mass and inertia. Large vessels have limited maneuverability and even worse brakes so stay well clear of them. This isn't rocket science. Being in the right as a 100,000 tons is bearing down on you will only provide a very brief period of smugness and satisfaction before you get splatted.


It was more difficult that I initially thought to find news stories about boating incidents  that didn't result in a serious injury or death. Actually one of the headlines I originally chose had what appeared to be survivable injuries. This turned ugly when one of the individuals died and I removed it. A boat made a turn without looking directly into the path of another boat traveling at high speed while overtaking it appears on the wrong side. There was no good moral for this story.  Be careful out there, and pay attention.
Posted by Bill Bishop - Parmain at 3:31 PM