Installing the Simrad SGO5 steer by wire autopilot and playing with the Sea Station.

Most of my autopilot installs I just grind out. Do the plumbing and contain the oily mess. Punch holes in the dash for control displays. Add NMEA network pieces, hang black boxes, and connect a bunch of wires. At the end of the job I smell like I've showered in hydraulic fluid, and dried off with a sweat soaked rag. It's very close to the truth. This autopilot system install is different, and different is good. No plumbing, no greasy fluids, few parts and it was easy-ish. This boat also has some very new Sea Star tech I had the opportunity to play with and really liked. 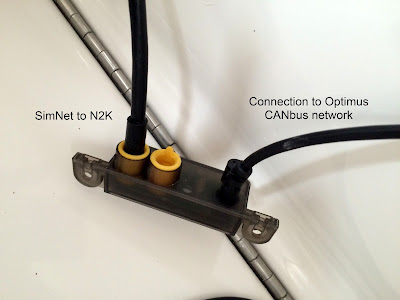 This is a new center console boat with a nice factory installed Simrad system. Twin 16" NSS displays, CHIRP sonar and Halo radar. The boat is also equipped with a SeaStar Optimus 360 joystick steering system, and hence why we need a steer by wire autopilot.

To do this install we only need two major pieces. The first is the Simrad SG05 you see above. There are several flavors of this unit seen above with the primary difference being cabling and interfacing for other steer by wire systems like Volvo's EVC/IPS and others.
. 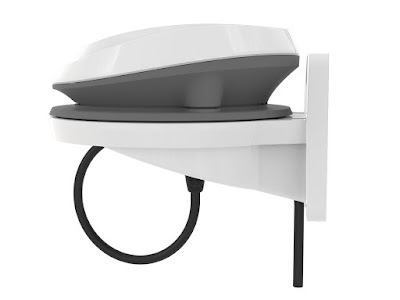 The other important part is we need a compass, and in this case it's the new Simrad Precision 9. It's simple to mount, and even easier to adjust. There is just one cable that connects it to the NMEA 2000 network. 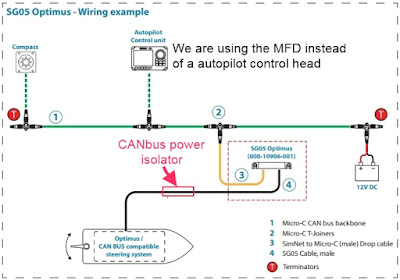 Before we get started take a look at the diagram. The SG05 is a gateway that translates NMEA 2000 into CANbus that the Optimus system understands. NMEA in, CANbus out and vice versa. So one cable (SimNet) goes to the NMEA 2000 network, and the other (the permanently installed one) goes to the CANbus network. Don't mix these two up.

We are also using the NSS display in place of an autopilot head. This saves another hole in the dash and the cost of the autopilot stand alone control head. 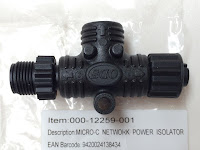 It's not in the installation instructions, but is covered in a Navico service bulletin. We have to isolate the power to the Optimus system. In other words we can't let the N2K network power connect to the Optimus CANbus system. A small inline isolator takes care of this. I made sure you can read the Simrad part number for the little thingy. 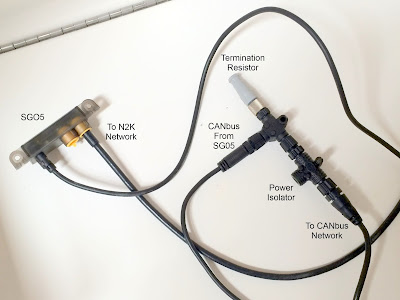 The connections are very simple. The SG05 connects to the NMEA 2000 network with a SimNet to device net (regular N2K tee) cable. The permanently installed cable connects to the Optimus CANbus network. In my case I pulled a termination resistor and moved it to what will be the end of the network. The photo shows the result. Add tie wraps and the physical installation is done. My elapsed time is about four hours and it's time to set it up on the briny.

Set up is generally straight forward. You start by calibrating the compass. Look to the left at the vertical sliding menu. Click on Network, then Device list, and then Precision 9 compass. Now click Calibrate. 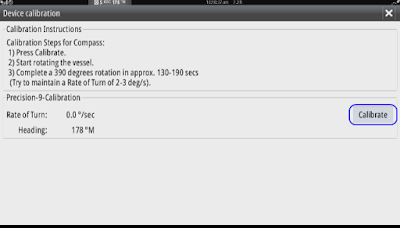 Like any compass set up you want low wind and fairly calm water conditions. Press Calibrate and start a turn in either direction with the goal being a full 360 rotation in about 1.5 to 2 minutes. It's not rocket science and the system will grumble at you if you're too slow or fast. Keep turning until it says it's done. My calibration only needed two turns. The Precision 9 compass was on the money when it was first installed, and retained it's correct heading after calibration. It's within a degree of a steady COG and that's as good as it gets. 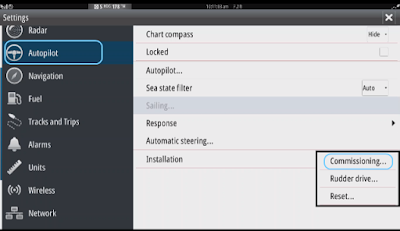 The autopilot setup is a bit more nuanced. Locate on the vertical sliding menu and click on the Autopilot followed by Commissioning. 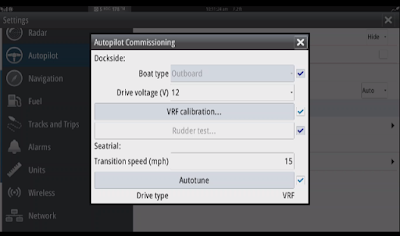 This is not the page I actually used. I lifted this screen grab from a Simrad demo boat at the NMEA conference. The software display is somewhat generic and this page is tweaked depending on the gear attached to it. In my case Sailboat was grayed out and the only two available boat types were displacement and outboard. Follow the screen instructions and fill in any blanks. Transition speed for a power boat is the lowest speed needed to maintain a comfortable plane.

Point the boat in a direction that gives you about a mile forward of maneuverability. Set the throttle to the recommended speed, press Autotune and let go of the helm. The best speed for a planing vessel is the highest speed you can go with no notable bow rise. This is around 7 or 8kts up to around 10 to 12kts tops. Bow rise will affect the tuning and make sure your seat back table is secure and trim tabs are in their fully upright position.

This is the part I like the best. In days of yore it would a tedious hour or two manually tuning the autopilot while plowing back and forth in the bay. Tweak the counter rudder and do it again, add some gain, oops not good reduce the gain. What happens now during an autotune at a very macro level is the pilot commands a turn of say 5 degrees. It uses its sensors to measure what actually happened and makes some algorithm changes to optimize. Repeat and with large and small turns and you can tell you're near the end when the boat straightens out and steers straight and it's done.

The autopilot works perfectly. Minimal cross track error and a clean dead straight wake. In fact the Optimus is doing the steering and is being told what to do by the Simrad pilot. Total time to do the install was six hours, and I could easily slash two hours off the next time I do it now that I have read all of the docs and lived the installation dream.

So is it suitable for DIY install. I think the answer is yes if you have some familiarity with NMEA and CANbus  networks. The tricky part you might need some help with is identifying the CANbus network and where to do the interface. If you're not sure then get professional help. I have seen what happens if you wire it incorrectly and it is not pretty or predictable. 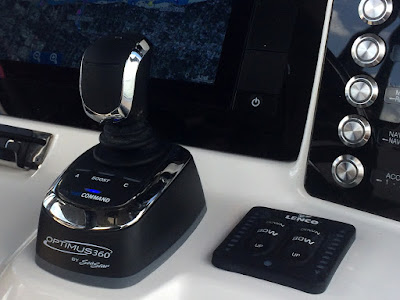 This boat as you now know has a SeaStar Optimus 360 joystick steering system. It also has the new "Sea Station" option which I believe was formally introduced at the IBEX show this week while I was there. Not to step on others terminology who in turn stole it from many others this is a sky hook system. Translated, the boat has the ability to hold a stopped position with a further option to hold the position with a specific heading.

To pull this off they have dual GPS's in a housing and uses them to calculate both position and the heading without the need for a compass. The Sea Station also has a small display for set up and advising what mode the system is currently using.

It works really well but what impressed me even more is how well and gracefully the joystick steering works. I have been on many boats with joystick steering and in general they all worked well and did their job. But to be honest the shifting of the engines on most of these boats have all seemed to have a sense of violence about it. The clanking and banging and jumping of the engines makes me wince and at the same time wondering it they are using shaped charge explosives to shift the engines. Well it's not that bad, but it makes me think the transmission life will likely be shortened. The Telefex Optimus 360 is devoid of most of this. They have some secret sauce software and interfaces that hugely reduces the number of times it needs to shift the engines in the first place, and when it shifts it does it smoothly. It's the best Joystick system I have used to date and the Sea Station option functions smoothly and quietly even in fairly strong winds.
Posted by Bill Bishop - Parmain at 2:53 PM