Despite rumors of its demise digital on air television is alive and well, while analog cable systems used by marinas are continuing to fade away into the past.  In this series we have looked at installing a WiFi Access point connected to a router, smart televisions, and a Signal K server and there is more to come on this subject.  To round out our cornucopia of wireless tech we are going to install Digital Yacht's impressive TV antenna and play with it for a bit.

It's pretty easy to install and more than suitable for a DYI project. But remember the golden rules about boats. Access to everything typically sucks, and wiring diagrams don't exist. I heard a rumor that the last known boat wiring diagram from a sixties vintage Hatteras is archived at the Library of Congress. Yeah, I'll believe it when I see it. 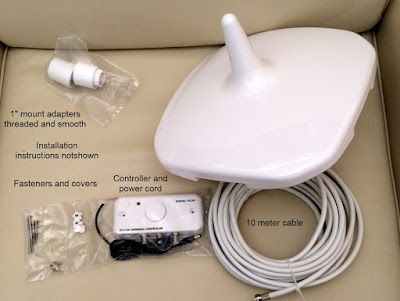 The actual product name is the futuristic sounding DTV100. I've splayed the box's contents out in the main salon. You get everything you need for most boats in the box with the exception of the coax cable from the amp to the TV or splitter.

You get two mount adapters, the amplifier and its fasteners, and the antenna with 10 meters of attached cable. 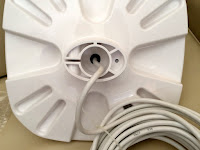 There is only one small thing I would have changed about this product if I was dictator.  It would have about a 1' pigtail with the RJ6 coax connector attached to the cable, and then include a butt connector along with the 10 meters of cable.

Why you ask? It's simple. The majority of boats already have a vintage antenna, and the coax cable is already there. In this common scenario detach the old antenna, stick on the new and attach the pigtail to the existing cable.

This saves lots of time in many cases, in a few others not so much. This also presumes the connector hasn't corroded into oblivion, and the cable is going where you want it to go. Sometimes it doesn't. 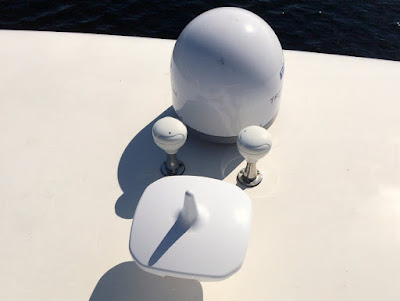 The antenna has a nice sturdy feel about it. You get two mount adapters so the combination accommodates smooth 25mm and 36mm mounts and the threaded 1" mount versions.

A little tip here. When using the smooth (non-threaded) mount put a couple of turns of masking tape or a little silicone on the mount to give it some added stiction. There is a bolt on the antenna base you tighten to lock it in place. 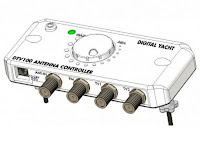 Now for the interesting part of the install. Hopefully you no longer still have a TV with built in VCR and glass picture tube. If you do, stop reading right now an buy a new TV, or get a good book and give up.

The exception to this is if you have a on air digital tuner attached to it, and all of this assumes you have a digital tuner in your TV.  Some new flat panel TV's tout a feature called "Tuner Free" like it's a bonus you want. You don't want this so called feature so look for this when you're buying a new TV. 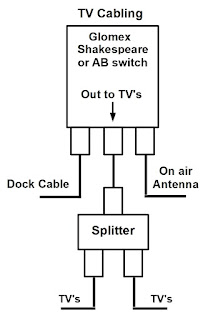 So we have a couple wiring scenarios to deal with. First is the classic AB switch configuration. The old analog antenna went in on one side and the dockside cable went into the other. The middle connector went to the splitter.

The Shakespeare and Glomex boxes do a similar task, but are also signal amplifiers when they're turned on. So what to do?

What happened in lots of cases were the Glomex or Shakespeare switches ended up in geographically unattractive locations from a cabling viewpoint. You can use them as a splitter of sorts if you don't turn them on. I'm not really happy with this because you get some additional signal loss in the process.

The quick and easy way out is to give something up, like the marina dockside cable. It's a disappearing service, and when you have it it's still analog with limited channel options in most cases.

The amplifier itself is easy to install. Find a close to the splitter location inside of something like a cabinet, but not so inside you can't easily get at it. It comes with a bolt set which I couldn't use so a couple of #4 screws took their place.

It has three coax connections. Take the wire from the antenna and plug it into the one marked antenna. No confusion here. Take another coax cable (you have to provide this) and screw it into the "TV" connector and the other end into the boats "In" connector of the boats splitter , or into the old "on air"connector" of either the Glomex or Shakespeare amps. If you do the latter don't turn them on for all eternity. The third connector is the FM antenna connection which I didn't use. You power the unit with either 12 or 24 volts and you're almost done now. 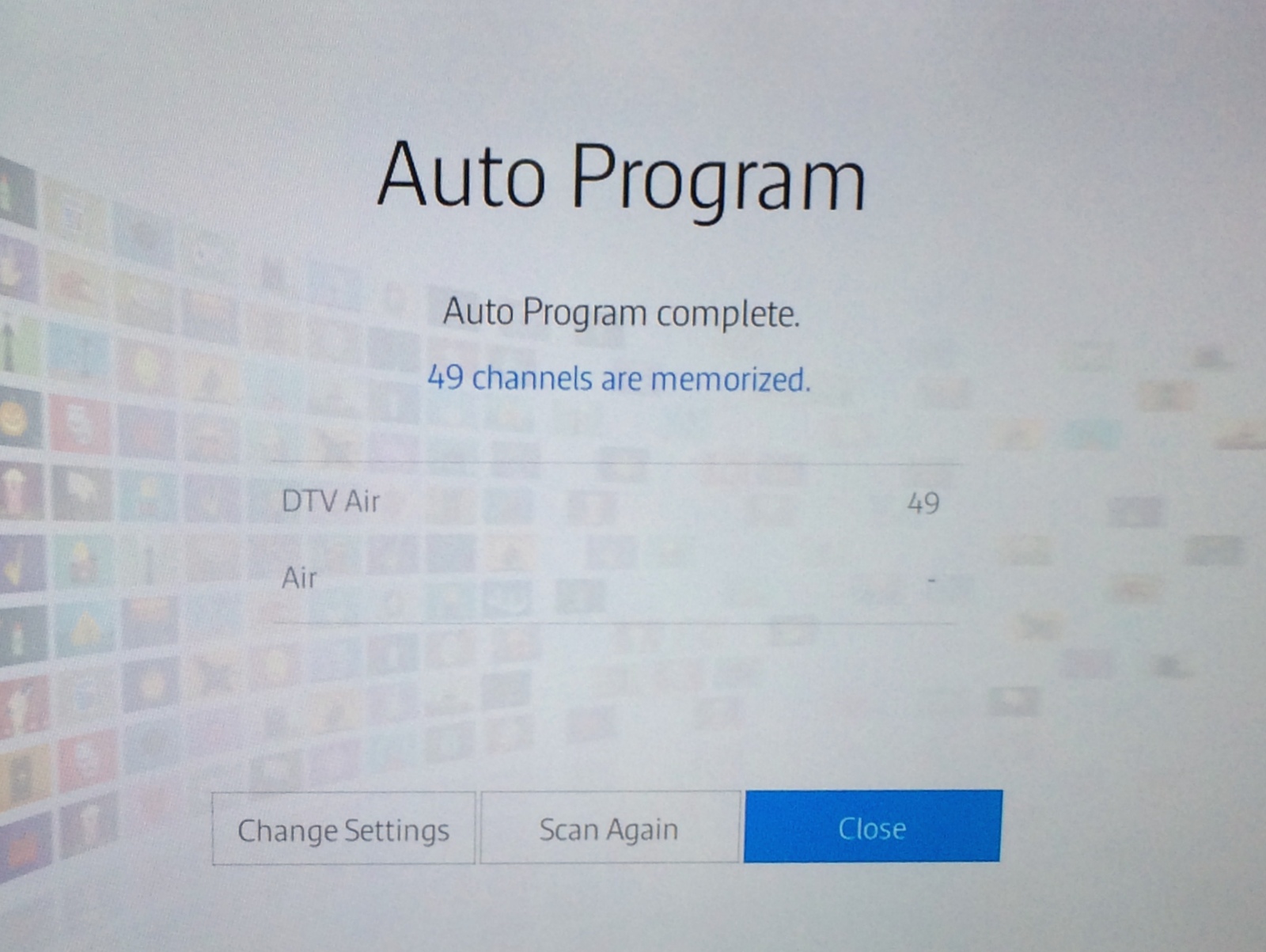 I wanted to compare the performance difference between the original vintage analog signal Glomex system that came with the boat, and the new Digital Yacht unit.

Before I installed the new system I ran a channel scan using the original Glomex system. I picked up 31 channels, and in reviewing them 8 of them were pixelated. This provided 23 usable channels. This was done at two in the afternoon with clear skies.

The following day with the new system now installed, in similar weather and at the same approximate time I scanned again and received 49 channels, and 4 were pixelated. I ended up with 45 usable channels, more than double the old system. Really impressive performance. I was pulling in clear stations that were 60 miles away in Fort Myers.

Part of the performance is the amplifier's gain range topping out at +27db. There are a few of other systems with similar gains, but given its compact footprint and solid construction this is the best performing unit I've seen to date. Having the FM antenna connection is also a real plus. In fairness to Glomex this was a vintage unit, and a newer one would have performed better.

Now for some nuance about antennas. I've installed five of these antennas. Four were replacing much older systems. The fifth was a new install and had some severe spatial constraints. Although the hardtop was large, the locations where you could pull wires to it were very limited. The last one ended up about 2' away from a Rouge Wave Internet access point antenna.

In theory the digital TV and WiFi frequencies are relatively far apart (MHz vs GHz) but the Ubiquity M2 bullet is leaking RF the Digital Yacht antenna can see. There are some anecdotal reports that this can occur in the 700MHz range which is the upper end of the digital TV range. This results in losing some of the weaker channels. The short term fix in this case is don't run both systems at the same time.

In general with antennas it's good to get as much separation between them as possible.  Another possibility might be a notch filter if I knew exactly what frequency was causing the problem. I'm still pondering options. In this same vein I have an Airmar PB200 putting an oscillation into a too close VHF antenna. I'm playing with copper tape to see if I can make it go away. This will be another adventure.
Posted by Bill Bishop - Parmain at 1:46 PM